My how the weeks have sped past! It's a bit hard to believe, but I'll be finishing up at the end of next week! This has definitely been a challenging deployment, full of lots of surprises, but most importantly, a wonderful team of people (which is growing by the week). We've had a lot of visitors, senior staff from Kampala, from the regional office, and from HQ, as well as a huge media visit. What's great about having visitors (apart from the advice they provide) is that I usually take them to the field, and get to see more of our work in action. So I thought I'd just share a few stories.

On one visit we met a woman who had 8 children with her. She was 8.5 months pregnant, and her husband had been murdered. As had her sister. So she fled with her 4 children, and her sister's 4 children, the oldest being 15. This was the house she'd built when they'd arrived 6 months ago. All of them slept in here. Since we built them a temporary shelter, the children all sleep in that, and she stays in here with their precious food rations. She had concerns about the security of her family but she hadn't been able to convince the local committee to relocate her. Thankfully, the next day our staff were able to organise for her to move, so hopefully she has delivered her baby safely and they all feel safer now. 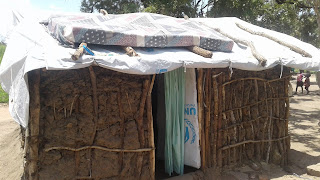 We took a journalist to meet a family of three kids. The eldest, a girl who is 17, and her two younger brothers, aged 14 and 15. Their mother had died some years ago, and their father was murdered. They came which a bunch of other kids, some of them were cousins, and they started off altogether - all 17 of them. The other children were reunited with family, so now it's just the three of them. Of the meager things they managed to bring, one boy brought his school books. He wasn't at the house when we arrived as he'd gone to school, but came back during our visit as the teacher hadn't shown up. 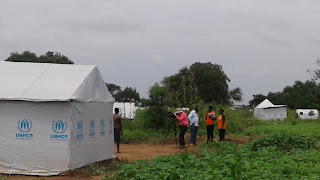 This is what it looks like to collect water. A whole bunch of jerry cans lined up, waiting in turn to be filled. It's usually women and girls who do the water collection which can be a dangerous task when the water trucks show up late and it's dark. 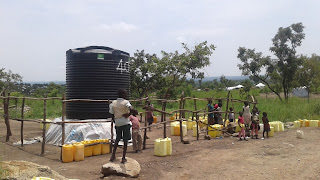 Here you see a truck stuck in the mud, and our driver testing the waters, literally, to see if we could pass. Spoiler alert, we got stuck and had to be pulled out by the red truck. 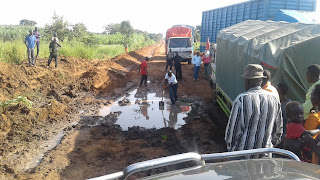 I hadn't seen much of the reception centre (where people are brought to be registered, get a hot meal, spend a couple of nights, receive some items and then taken to their plot of land), but with the media crew we spent some time there. This woman really sums up the strength of South Sudanese women. She was carrying the jerry cans, tied together with string, her family's belongings on her head, and a young baby on her back. Women and children make up 82% of the South Sudanese refugees in Uganda. 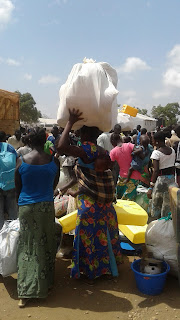 This is the site they're taken to before they are moved to their plots. It was about an hour's drive from the reception centre, down red dirt roads (my face was covered in dirt by the time we arrived, having been behind a convoy of UN trucks) to the mini reception centre. Here, they pick up their belongings from the truck, get another hot meal, and spend another night in big shared tents. The next day, they are taken to their plot of land (which is supposed to be 50m by 50m, but is sometimes 30x30) and given some tarpaulin and poles and left to start their new lives. 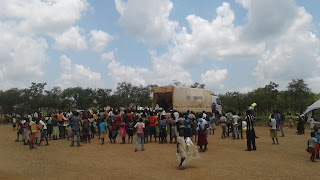 The need here is so great - there are now over 1,000,000 refugees from South Sudan in Uganda, along with 300,000+ refugees from other neighbouring countries. So many come with only the clothes on their backs - I saw one girl who was in a school uniform, which she must have been wearing when it was time to leave. The stories I've mentioned above are not usual - everyone I've spoken to has lost family members, lost their livelihoods, lost everything. Some have hope that they'll go home, others have decided to concentrate on making their lives here.

There is a ridiculous amount of need around the world at the moment, from conflict and natural disasters, so if you have the means, please consider donating to a reputable aid agency to support their work. You may not think your donation makes a difference, but believe me, when we receive money from the public, we can do a lot.