Back in the game

Yes, it's been another long hiatus in the blogosphere for Carly. I've spent the past 3 months enjoying funemployment, mostly hanging around in Melbourne, but with a couple of fantastic trips to Japan and Sweden. But it got to a point where I needed to start seeing some money come into the bank account, so I decided it was time to go back to work. I wasn't going to really actively pursue anything too hard, I just wanted to find a 3 month deployment, as a team leader, in a different organisation to the one I'd spent the last 6 years with. A well-timed message from a friend asking if I was looking led me to sending my CV to a Regional Director, a skype chat with an HR person in Canada, and then another with the Country Director, and a week later I was on a plane to Uganda!

So here I am, for 3 months, as a response team leader, for an organisation different to the last. I'm based in Arua, which is in the north west of Uganda, a couple of hours drive from the South Sudan border. And that's why I'm here; Uganda is hosting over 1 million refugees. The vast majority are from South Sudan, but also Congo and Burundi.

Arua is an 8 hour drive from Kampala, so after a couple of days induction in the capital, I was on my way. I'll say this, being the boss definitely has its benefits...I got to sit in the front seat, while three of my colleagues were squished in the back. Apart from not being squished, I also had a front row seat (literally) to something amazing: 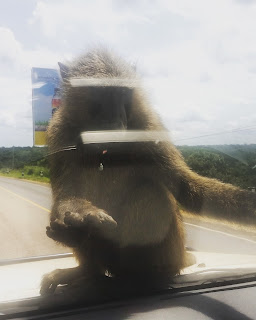 I'd gotten a bit excited when I spotted the baboons on the side of the road (we were driving through Murchison National Park) but was absolutely gobsmacked when I noticed one on the roof of the (moving) car in front of us, and was worried it was a goner when it jumped off...but it was fine. Seconds later, there's a baboon on the bonnet (good name for a children's book...) pawing at the glass in front of my face, while we're travelling at at least 40km/hr. It jumped onto the roof and back down onto the bonnet a couple of times, and then finally took a diagonal running leap off the front. Craziness.

We also then saw these little guys, far less interested in harassing the cars! 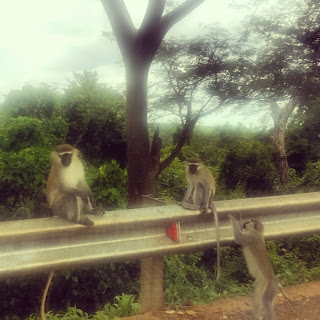 We met up with some colleagues who were travelling in the opposite direction, and they said they'd seen some elephants on the side of the road. A while later, there they were in front of us. About 8, just milling around. Fred, our driver, stopped some distance away, to determine whether they wanted to cross (animals have right of way in the park), but they seemed happy just munching, so we drove past. They were all large with tusks, and just gorgeous. 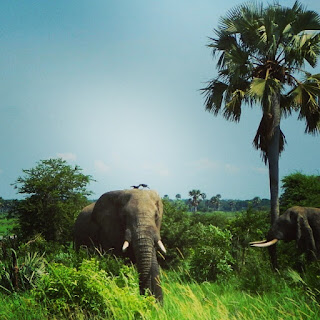 But enough about the safari! My organisation has been helping people with special needs erect the temporary shelter they're given by the UN, and we'll soon start constructing semi-permanent shelters...it's likely that these families will be here for a long time. On Thursday I visited two of the settlements, which are a couple of hours drive from Arua, and spread out over huge distances - they're not traditional refugee camps. The Ugandan government allocates newly arrived people a plot of land, then they're given some supplies and left to their own devices. So the settlements aren't dissimilar to the local villages, except for the presence of the UNHCR tarps everywhere. Some areas of the settlements had lively markets and really solid looking houses...because those refugees have been here since 2008. 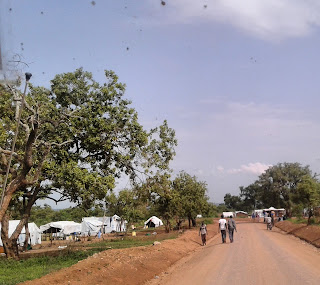 We're also doing a lot of work to prevent and treat Gender Based Violence (GBV) and Reproductive and Maternal Health, and I'm looking forward to learning more about that.

I think it's going to be a really interesting few months. There's about 30 odd staff working on the response (some are based in Arua, some are in a town called Yumbe close to the settlements) and there's a lot of work to be done. There's also a couple of key positions that are still being recruited, so I think I'll be doing the work of about 3 people for a while!

And I realised something cool this morning, Uganda is the 50th country I've visited - quite the milestone! :-)
Posted by Carly at 9:52 PM No comments: