I've just spent three days in lock down. That was the best thing that could have happened for me, as I got to do nothing but sleep, read, and rest. Delightful.

But back to Kumala. For many years I've heard about hand dug wells, I've written reports about hand dug wells, but what I realised is that I'd never seen a well being dug by hand (which is what a hand dug well is, in case you hadn't caught on). It is truly amazing. The two man team would dig over night (it was too hot during the day), and get down a couple of metres each night. This was taken after a few days, and they were already past 6 metres. Super cool. 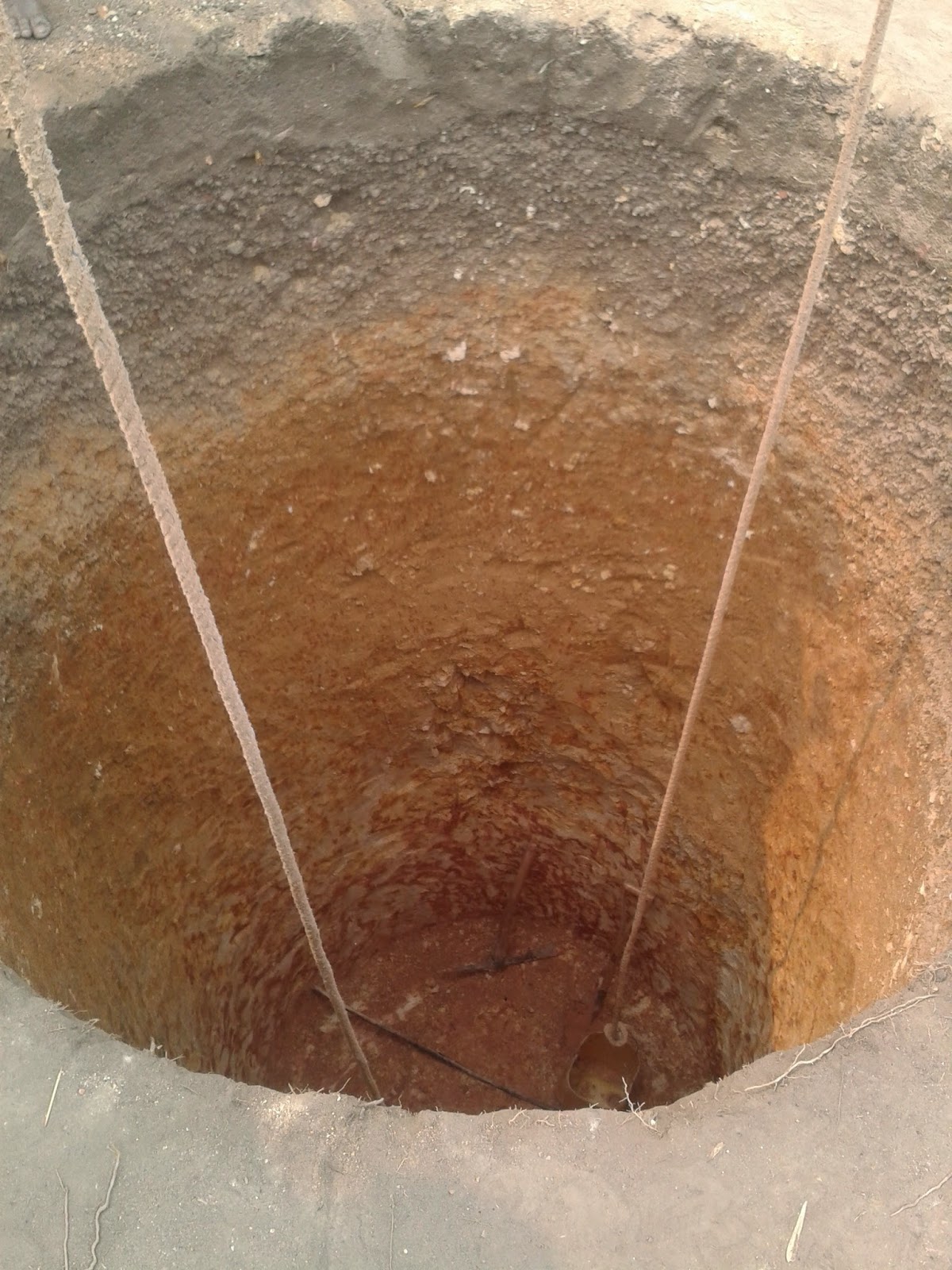 Another bit of local engineering genius are tippy taps. In order to properly wash your hands you need both of them to rub against each other, so when you step on the stick lying on the ground (which is connected to the lid of the jug) it tips the jug over and water comes out of a hole. Genius! 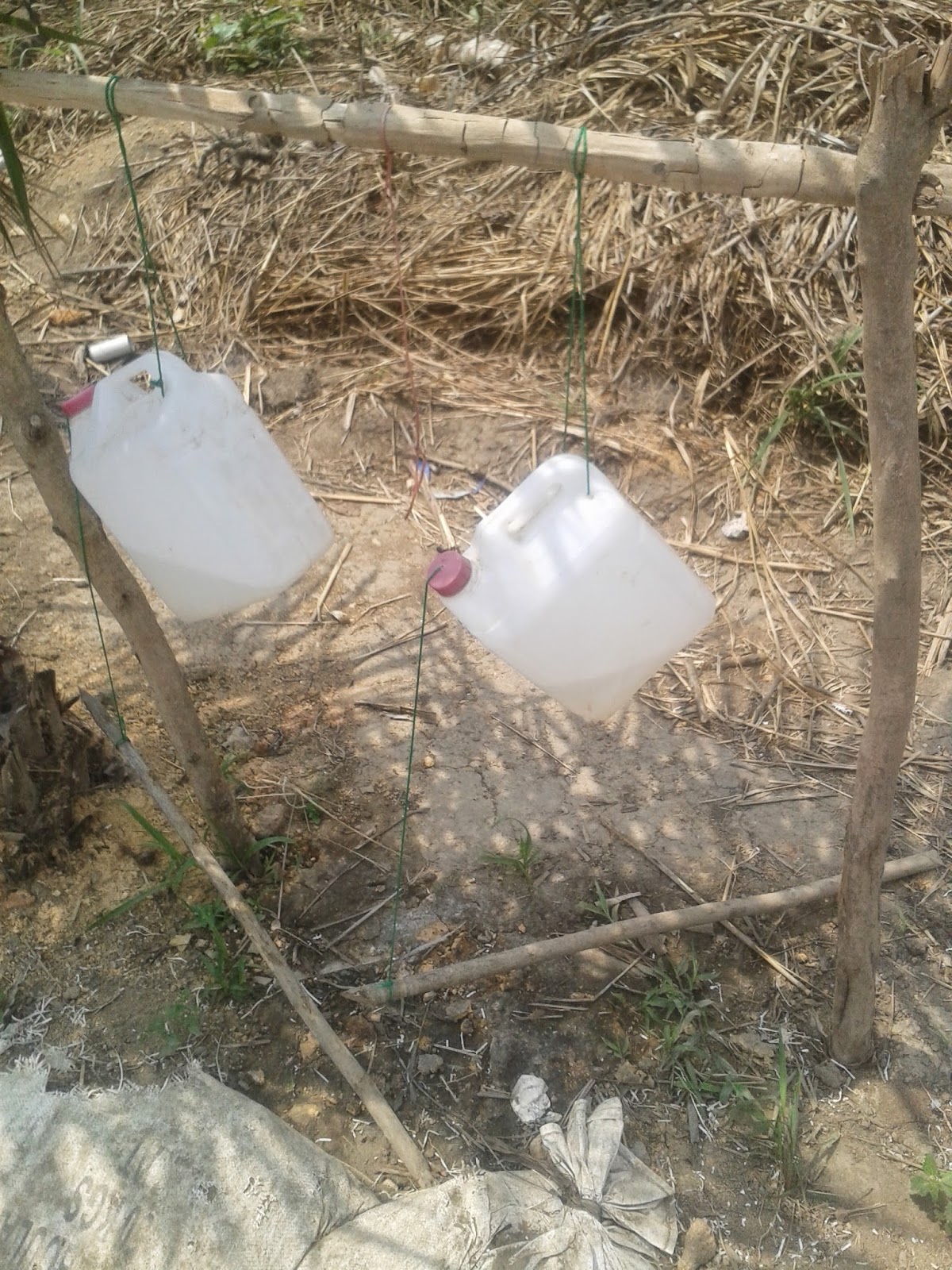 These were some of the hygienists who work at the holding centre, where patients suspected of having ebola are tested and await their results. Most of the 18 hygienists are students or teachers, and volunteered to take on the job many months ago. Since schools are supposed to re-open in a couple of weeks, we advertised for new hygienists. 78 people applied for jobs, and there will only be 7 spaces. They have a hugely important job, responsible for cleaning all of the areas of the centre with chlorine. This photo was taken after they'd just carried a body to the morgue (the tarpaulin covered structure on the right of the photo). A very ill woman had come to centre and died over night. She didn't have ebola, but every case has to be treated as such. Wearing the full Personal Protective Equipment (PPE) is incredibly hot (I've not tried it myself), and with the temperature outside being over 35 degrees celcius most days, it was very hard work for them to do. 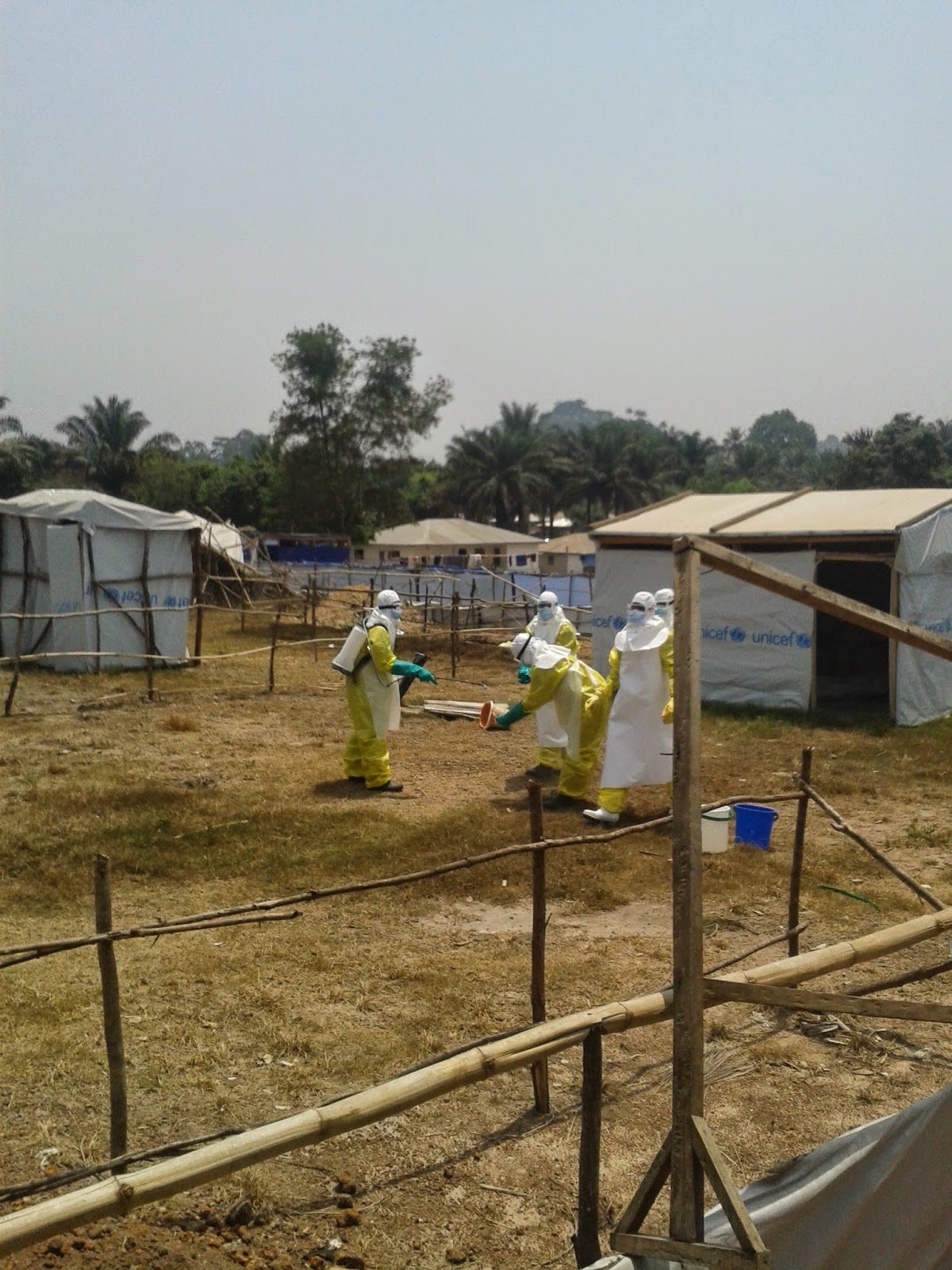 This is the 'bridge' into Kumala village. I'd wander down every couple of days to check on the progress of the new centre construction, and also to check on the quarantined people. Walking anywhere around the village you'd hear the cries of "Tubabu!!", which means white man. The little kids were always so excited to see any white foreigners, and would follow me around. So so cute. 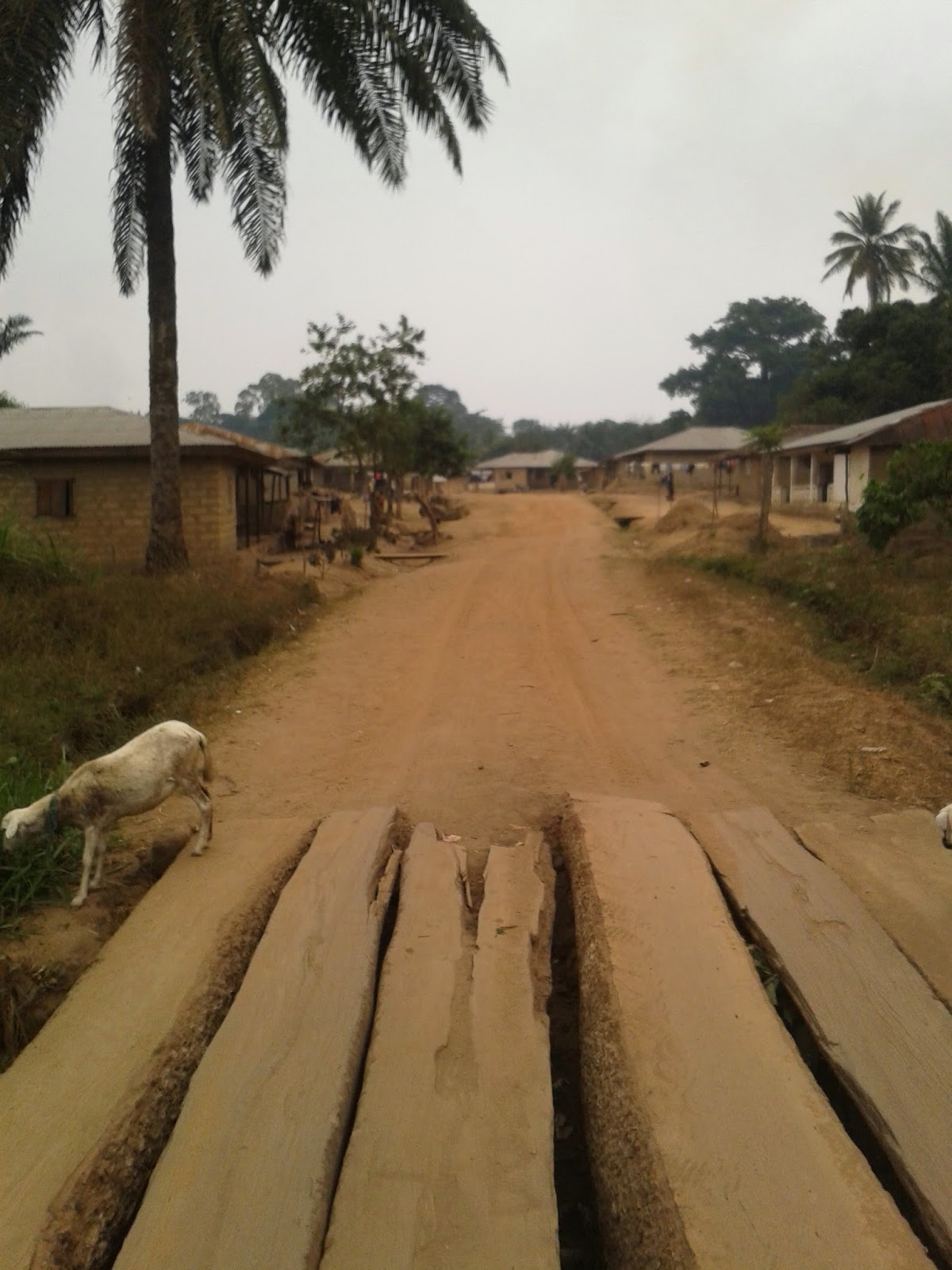 And on my last day, while I was sad to leave the team I was also very ready to get back to Freetown. I was tired, I was dirty, I was absolutely exhausted. It was really interesting to see Sierra Leone from above, far greener and hillier than the impression Kumala had given me. 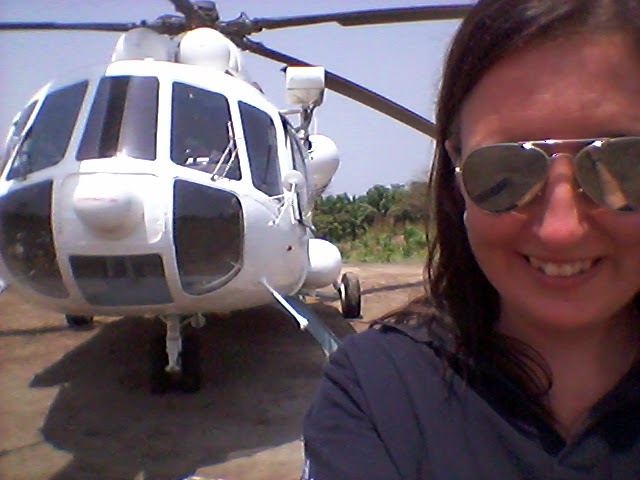 We had two stops in the helicopter before reaching Freetown, and as we flew in over Kono, my colleague pointed out the diamond mining going on. Kono is the diamond capital of Sierra Leone and was the setting for the film Blood Diamond. 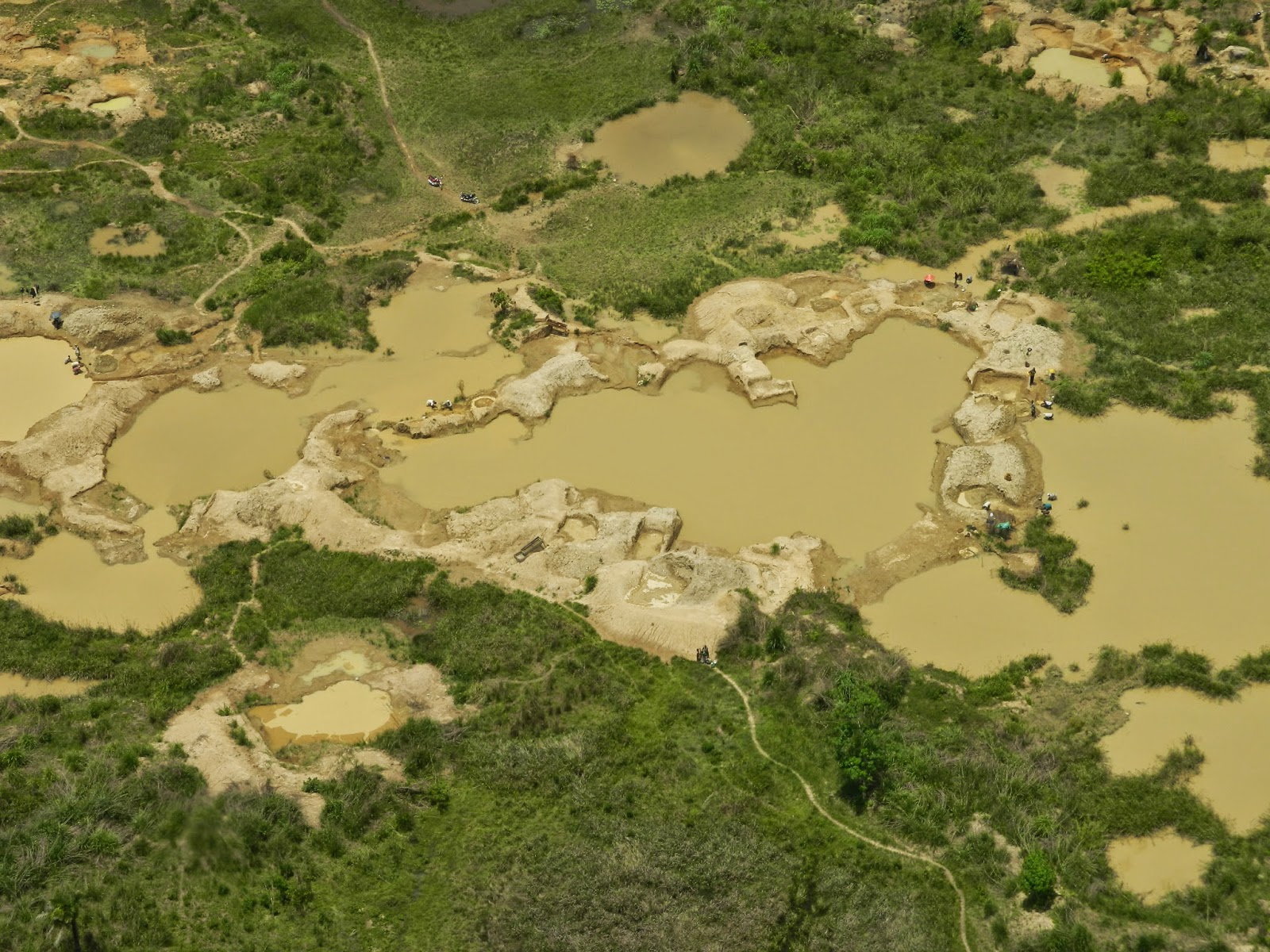 It seems strange, coming from a big mining country where the infrastructure is so huge, to see how diamonds are mined here. Just a few men here and there in these dirty pools of water. Much like the gold rush days I suppose.

So now I have a couple more days in Freetown, before I head to Bombali district to spend a few weeks there. I'm looking forward to the challenges that await me there.
Posted by Carly at 10:38 PM No comments:

Four weeks ago now, I travelled for a good six hours to get to Kabala, the capital of Koinadugu district in the north of Sierra Leone. I can't really remember much about the day and a half I spent there, but it was a lot of coordination meetings, and introductions to district officials who I may need to contact from my next location.

That next spot was a village called Kumala. Or rather, a camp 10 minutes walk from Kumala. The back half of this dome tent was my home for three weeks. 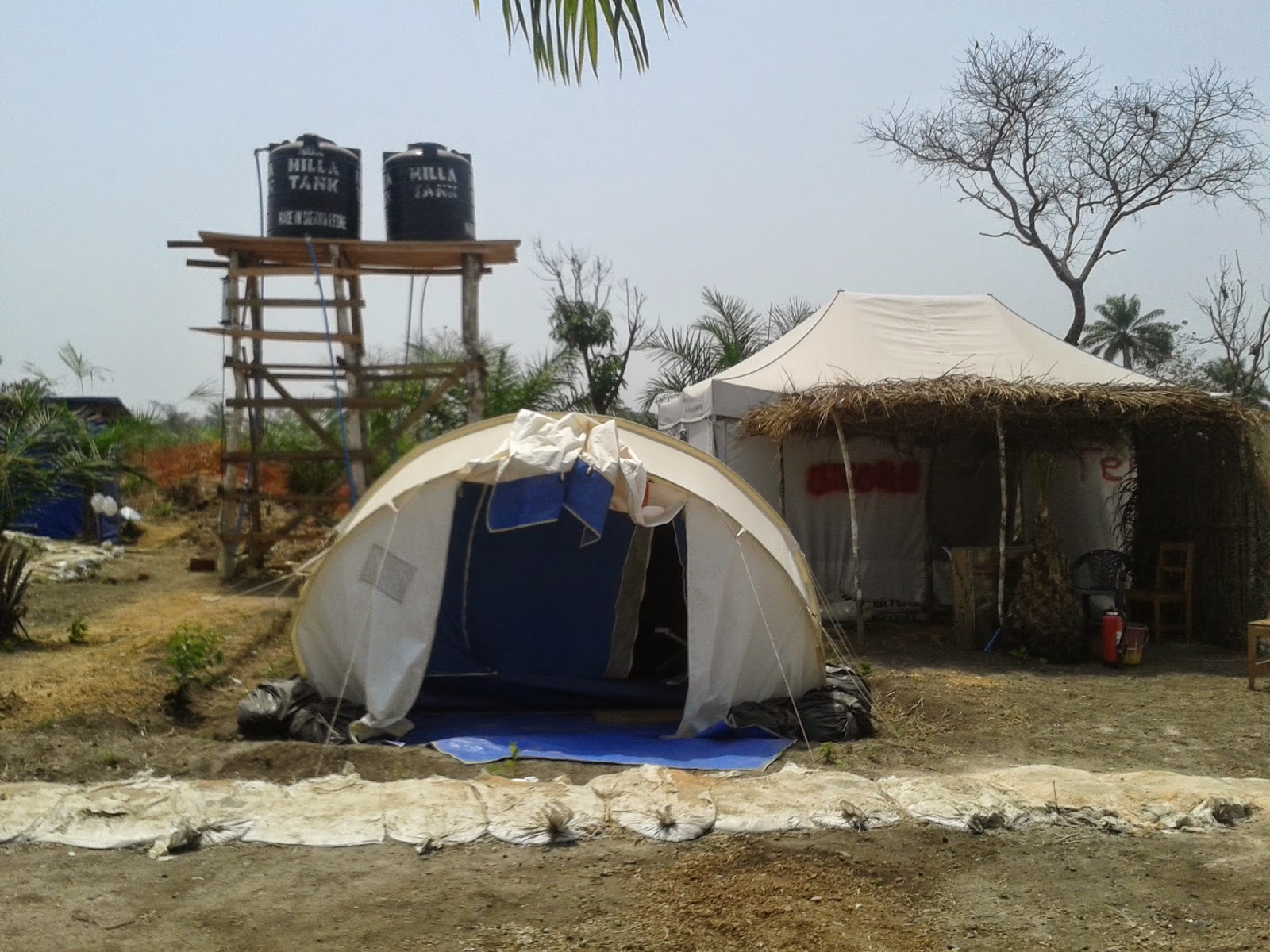 For my first outing as the roving manager, I thought I was strolling in to Kumala for a couple of weeks, and wouldn't have too hard a time of it. The team there is great, and have been working really hard for the last few months, so I was confident it was going to be smooth sailing.

Oh but I was wrong. Every single day something went pretty badly wrong. The worst thing of course, was after having no positive ebola cases for 20 days (21 days being the incubation period), there were suddenly three positive cases over the course of a week. When positive cases are found, the people who have had contact with the person are quarantined for 21 days. So we suddenly had 55 people in quarantine in two villages, who needed water, sanitation, and food. While WFP is responsible for providing the staple food for the quarantine period, it's basically just rice and oil. So my organisation has been supplementing that with condiments (that the households can choose) so that their diet is a bit more varied. We delivered jerry cans and coordinated with the army and the local communities to actually get those jerry cans filled with water every day, we instructed people how to dig a latrine pit and when completed, would deliver a latrine slab so that they had somewhere safe to use the toilet. I'm incredibly proud of the quick response the team would make whenever a new household was quarantined.

We had many many other challenges, but somehow we managed to figure out appropriate solutions and mostly carry on with the work that needed to be done. And how was that work done? By sitting under a thatched 'palaver' hut (you may know it as a tukul). Yes, my office was nice and cool, well, it was probably only 34 degrees in there rather than the 37 out of the shade, and early on, was frequently visited by chickens. (I named this one Dinner). 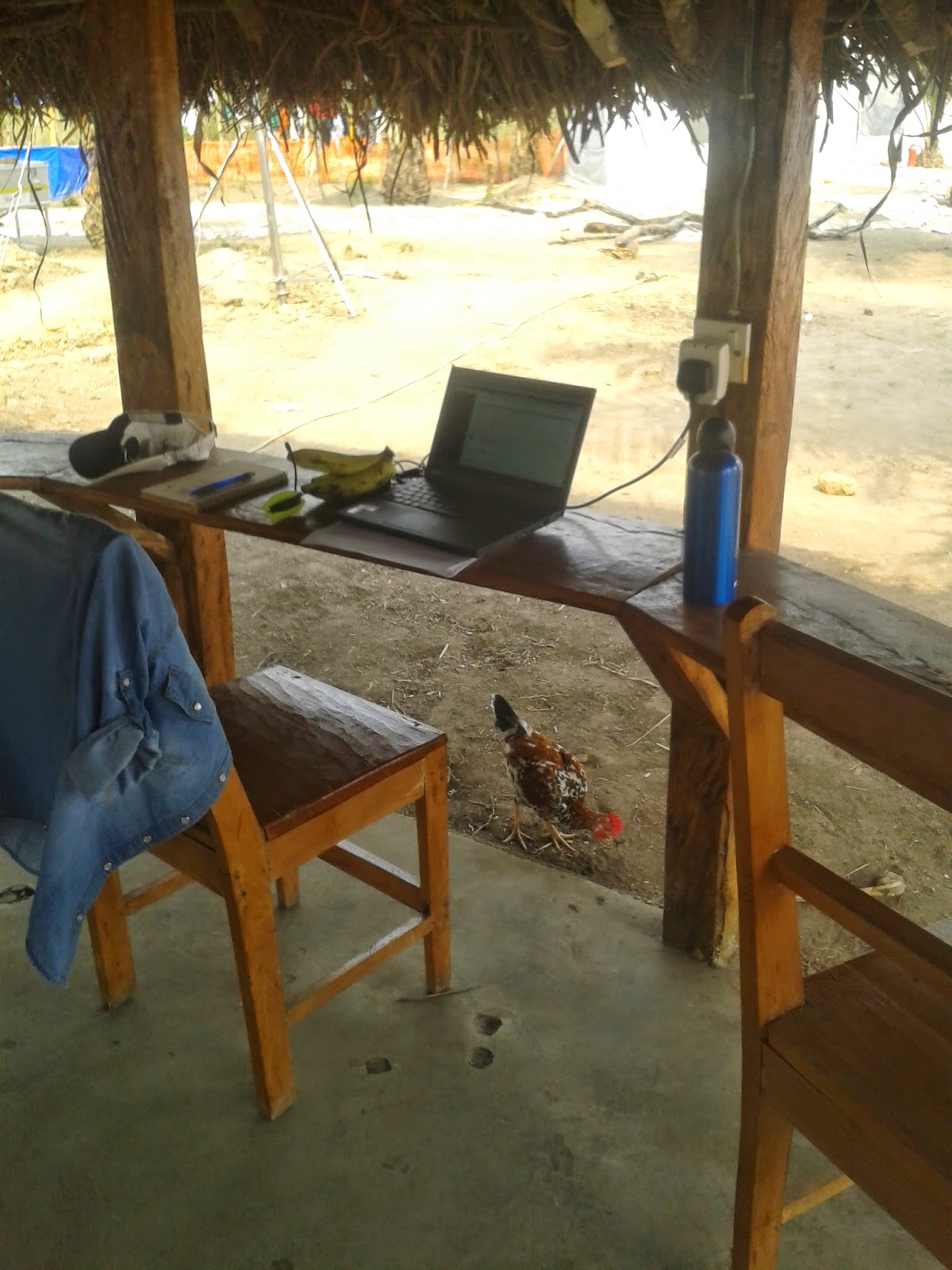 The base camp was an interesting place to live. It houses three NGOs, doctors and nurses from the African Union, as well as District Health teams who work on contact tracing and active case finding. On average there were about 50 people there each night, all of whom required feeding. A local women's group had been formed, and they provided the catering. While they still have a ways to go in organising themselves in things like timing the meals to be ready when they're supposed to be etc, the food was surprsingly good. Though I am completely sick of rice and fried chicken and cassava leaves. One of the great things about working with engineers and logisticians is their ability to create things out of other things. Like a BBQ out of a metal box one of the tents had come in. This roasted goat was the best meal I had in Kumala! 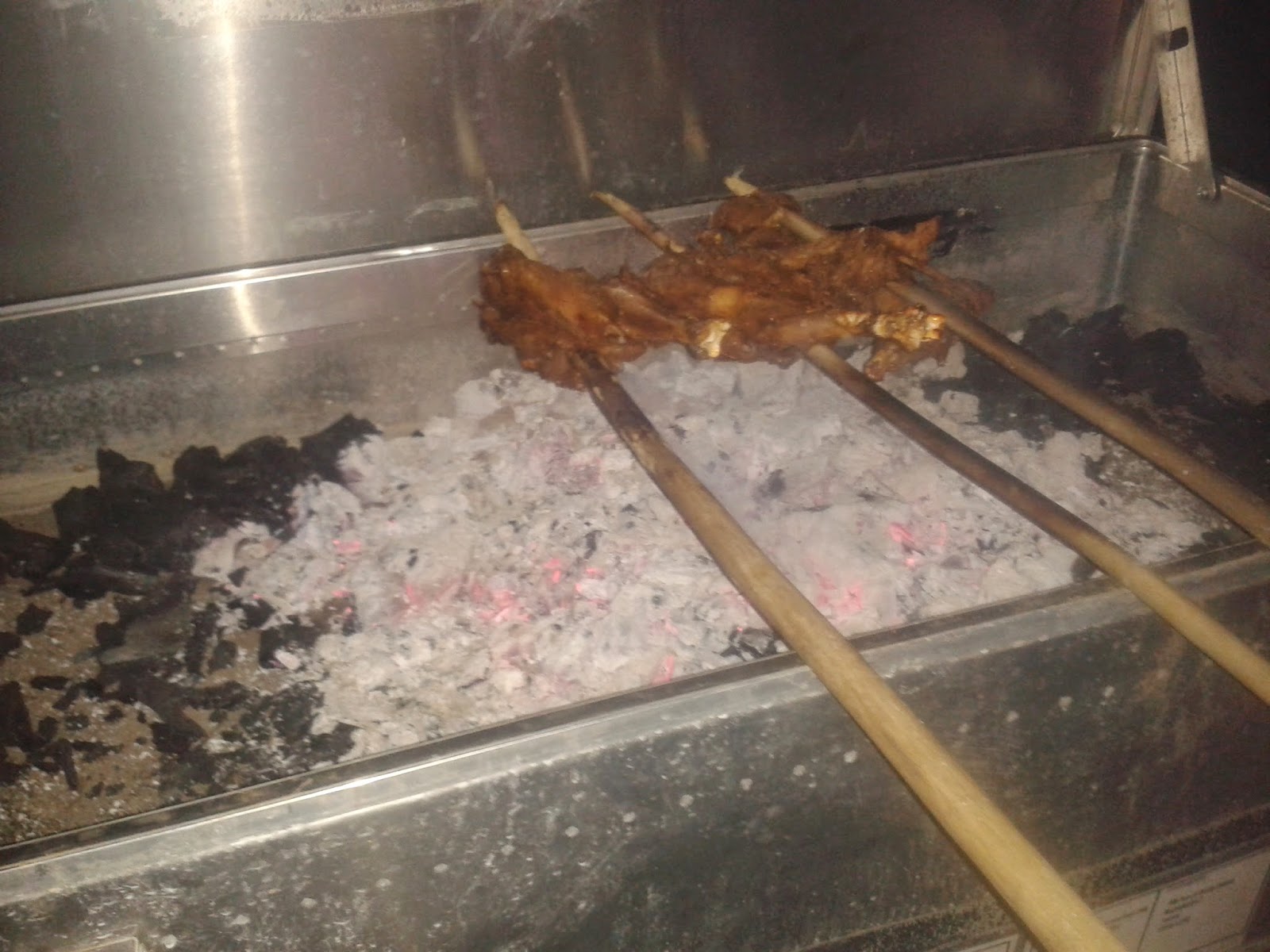 There are many other photos I could share, but the internet is pretty slow in my guesthouse in Freetown. I got back here on Wednesday (via the UN helicopter) and was absolutely exhausted. Three and a half weeks without a day off (without even half a day off), in the heat, the dirt, and with a resident mouse in my tent, was incredibly tough. Luckily for me, on Friday a 'stay at home' 3 day period was instigated by the government. Basically a lock down, across the country everyone stays at home (of course there are some exceptions) for three days, so that active case finders can do exactly that, find sick people who should be in ebola treatment centres. This happened a few months ago and they found 150 cases. But for me, an excuse to sit at home for three days and just sleep, watch movies, and hang out with my housemates (who are old friends of mine) was a very happy turn of events.

I'll write more about Kumala soon enough, I have to mention the hand dug well that blew my mind!!
Posted by Carly at 8:47 PM No comments:

An update is coming...

I'm back from the bush. Three weeks spent in a tent. I'm incredibly exhausted. I will write about it soon. Using full sentences. I promise.
Posted by Carly at 8:03 AM No comments:

One week in Freetown

I had a wonderful few days in Oxford catching up with old friends and meeting new colleagues. It was relatively freezing compared to the summer I'd just left, but most of the days were blue skies which always makes the cold more manageable. Oxford is such a beautiful city, even though this time around the only times I got to see the centre were on my way in and out, it was still nice to see! 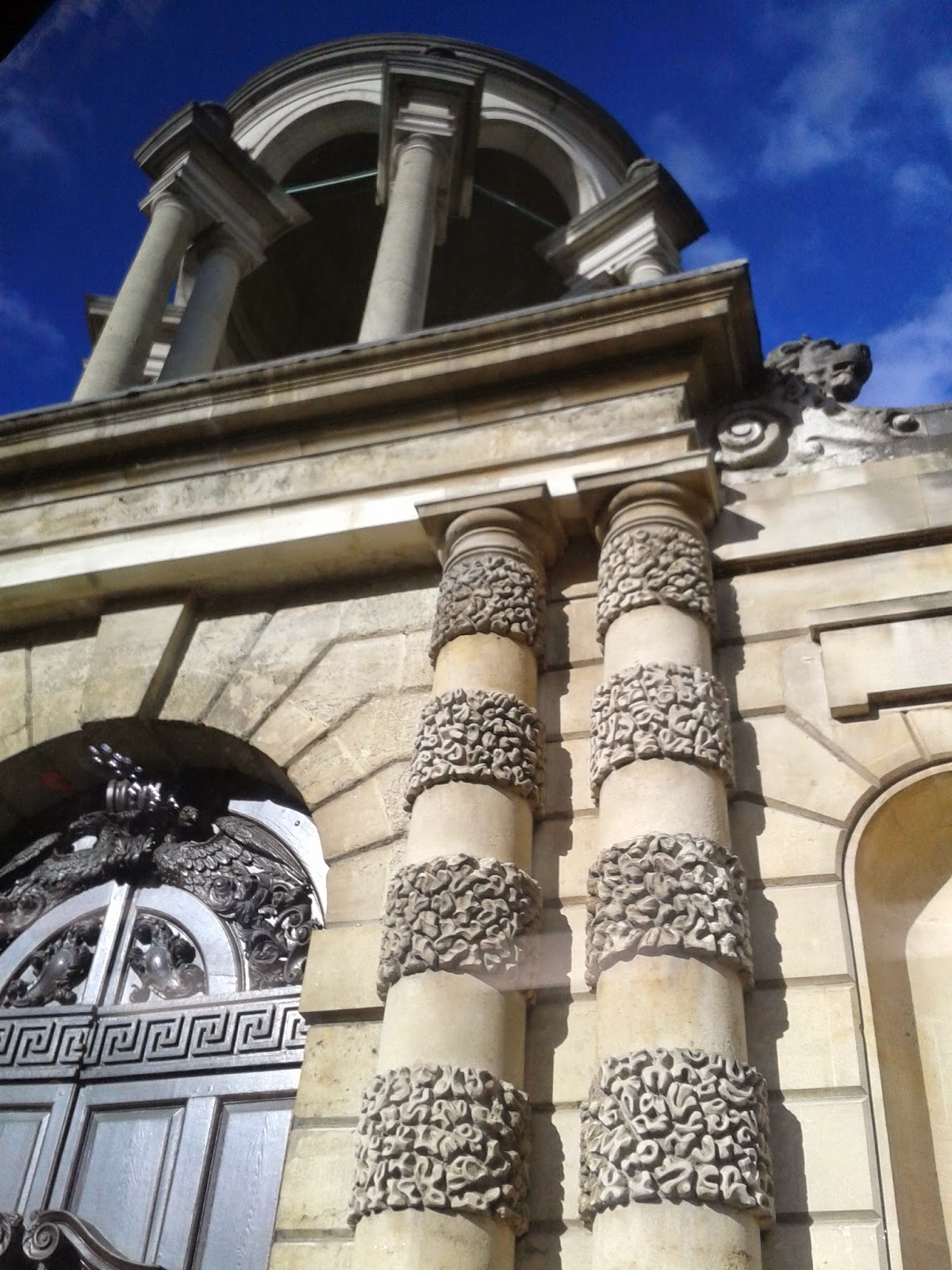 The journey from Heathrow to Freetown was pretty uneventful. I was travelling with two colleagues which was nice, as we were delayed by almost 2 hours in London. That meant when we got to Casablanca to transfer it was a mad dash through the airport and straight onto the next plane. (Casablanca airport didn't look too interesting, but flying over there were lots of interesting lighting arrangements in the city below.)

We landed at Lungi airport at 4ish in the morning. After getting through immigration, and having our temperatures checked for the first time, we collected our bags and were greeted by an agent my organisation uses to meet people and arrange their ownward journey. The thing about Lungi airport is that it's across an estuary from Freetown, so you have to get a speedboat which took half an hour. I was fine the whole way, except the last few minutes so I was quite glad it finished when it did. By this stage it was 6am and the sun still wasn't up. We were taken to a hotel and eventually the sun started to come up. This has been my view out over some mangrove trees. 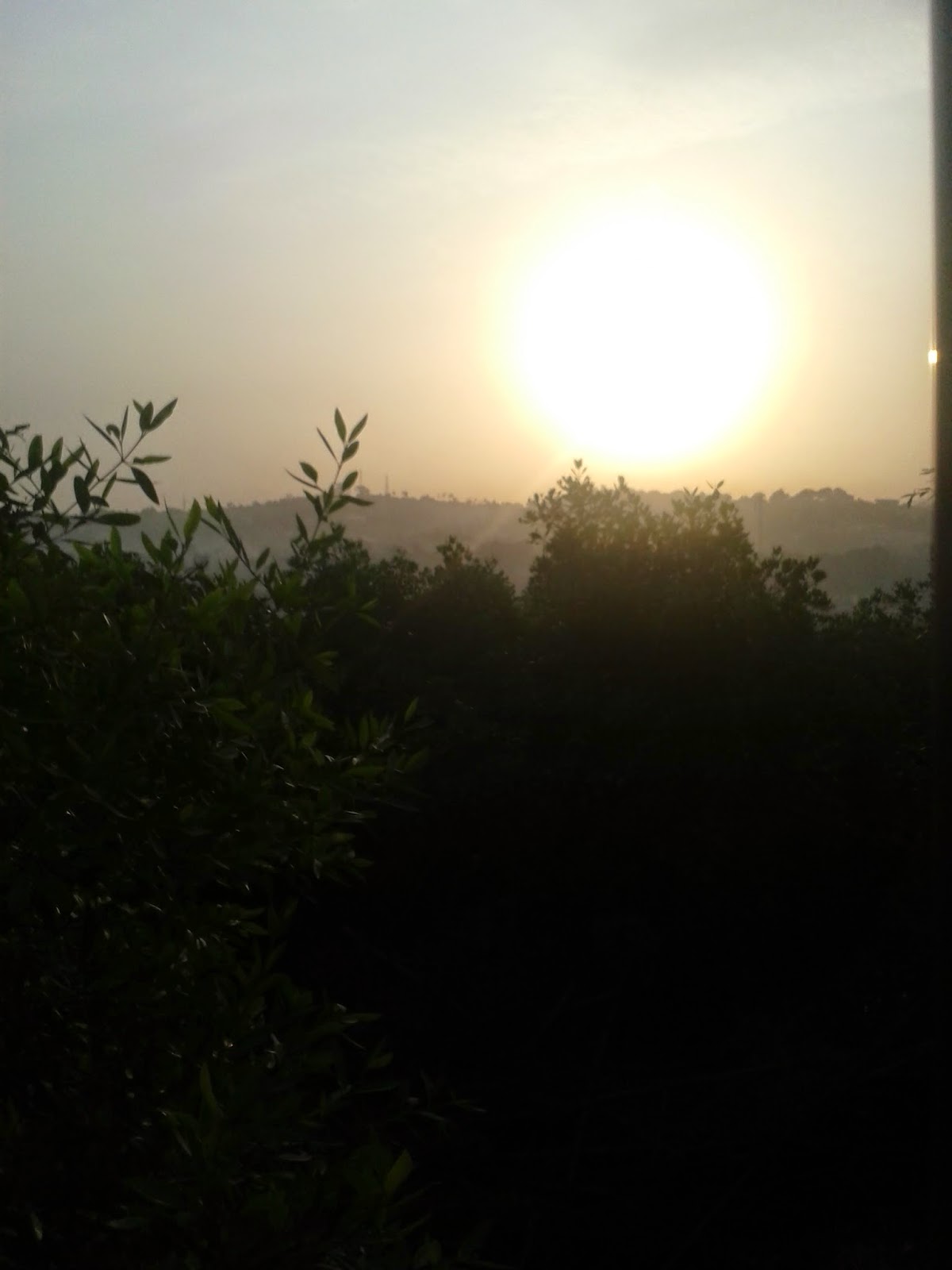 There's also a weird duck enclosure in the hotel. Well, it's attached to a Chinese restaurant, perhaps not too weird, but I've been counting the ducks each day and none have ended up on the menu. What made this particularly weird was that there was a tiny deer type thing in there as well, but it disappeared a few days ago (hope it didn't end up on the menu!) 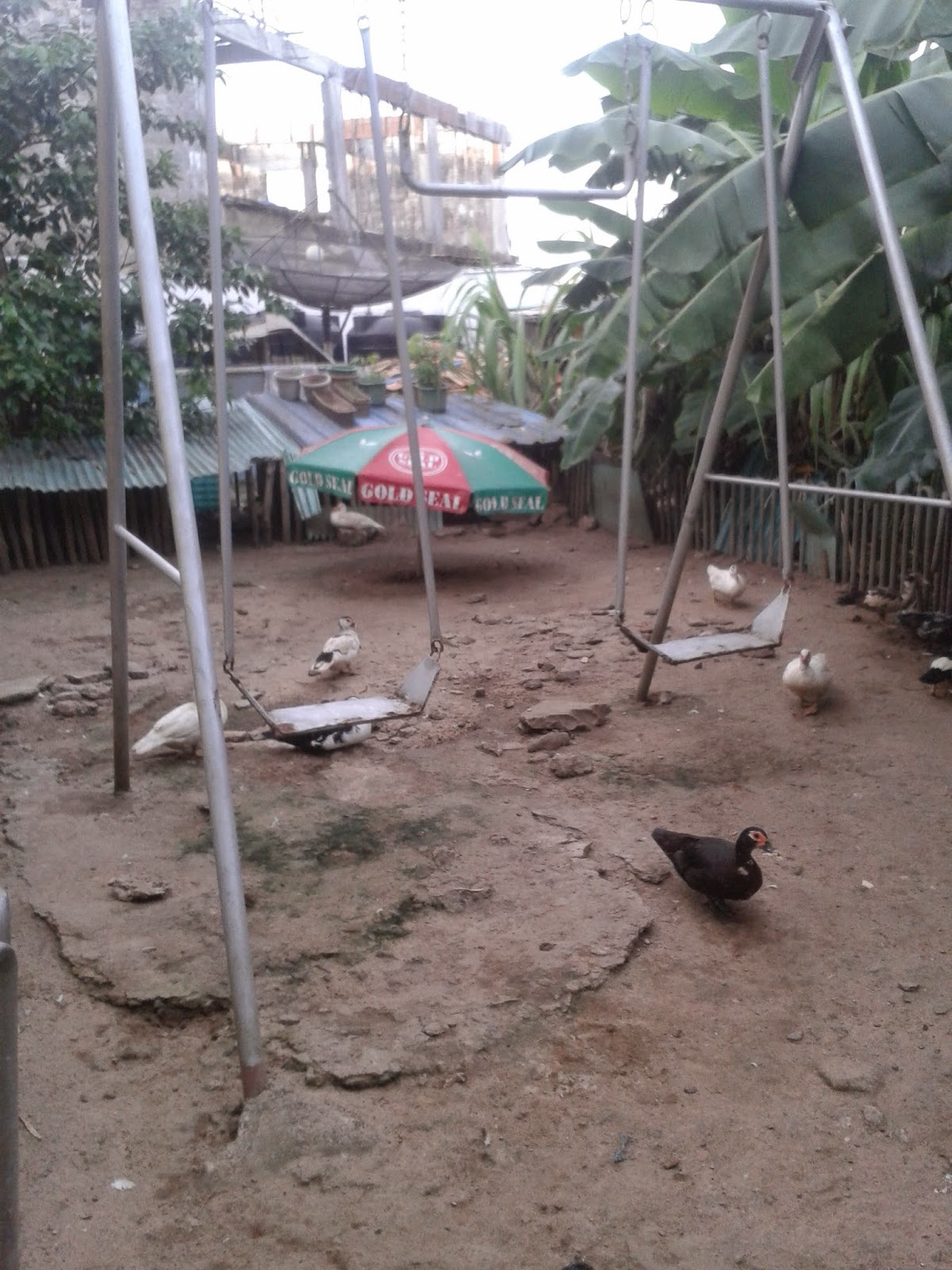 My days at the office (where we get out temperature taken and recorded, then wash our hands with soap and water before we can enter) have been filled with briefing meetings and reading through a lot of documents and budgets, and on the one occassion I managed to leave early enough for a little stroll on the beach, I came across this: 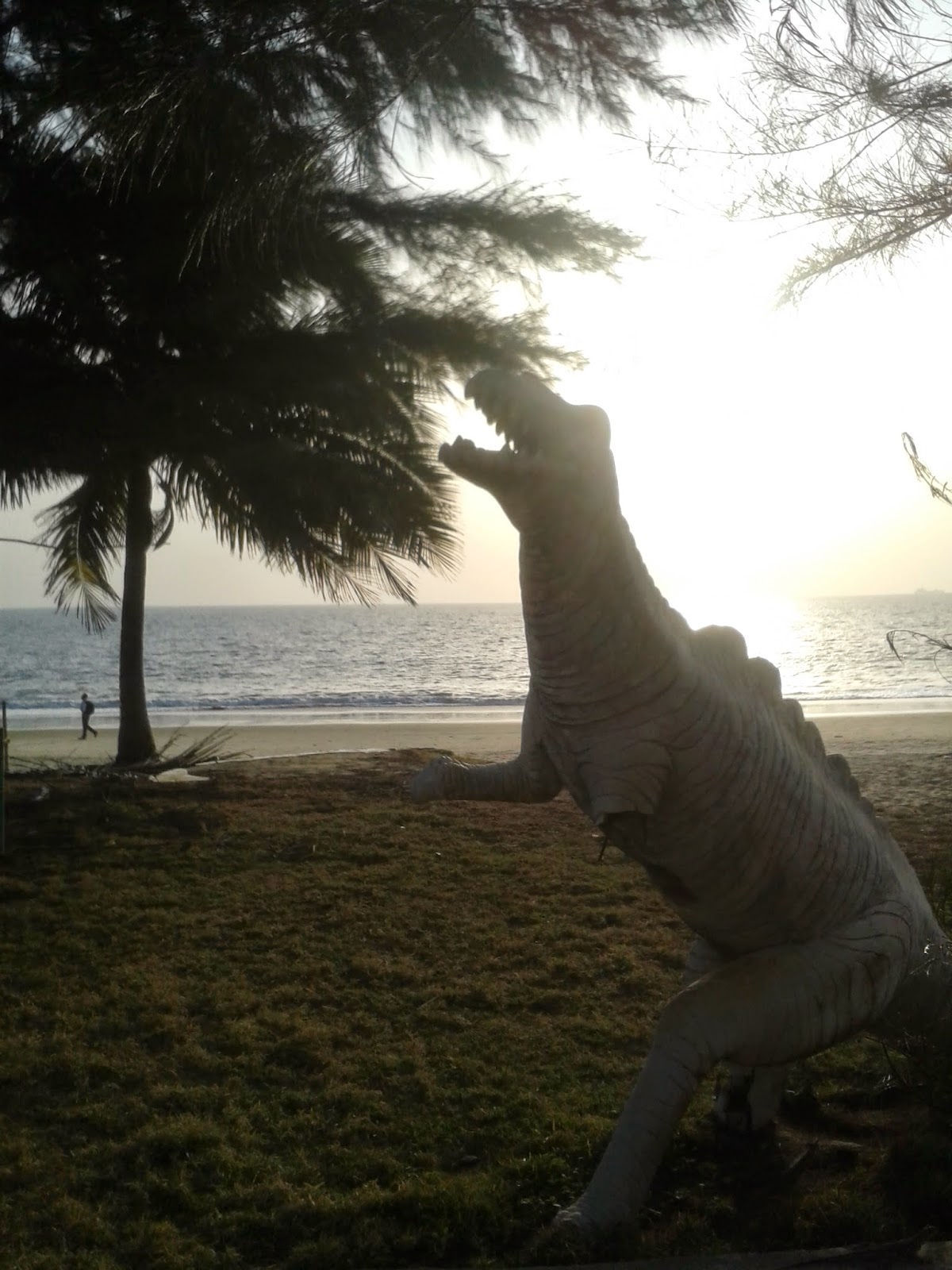 Yep. It's a large dinosaur statue (missing an arm), on the beach front. Bizzare. The beach itself is pretty enough to look at 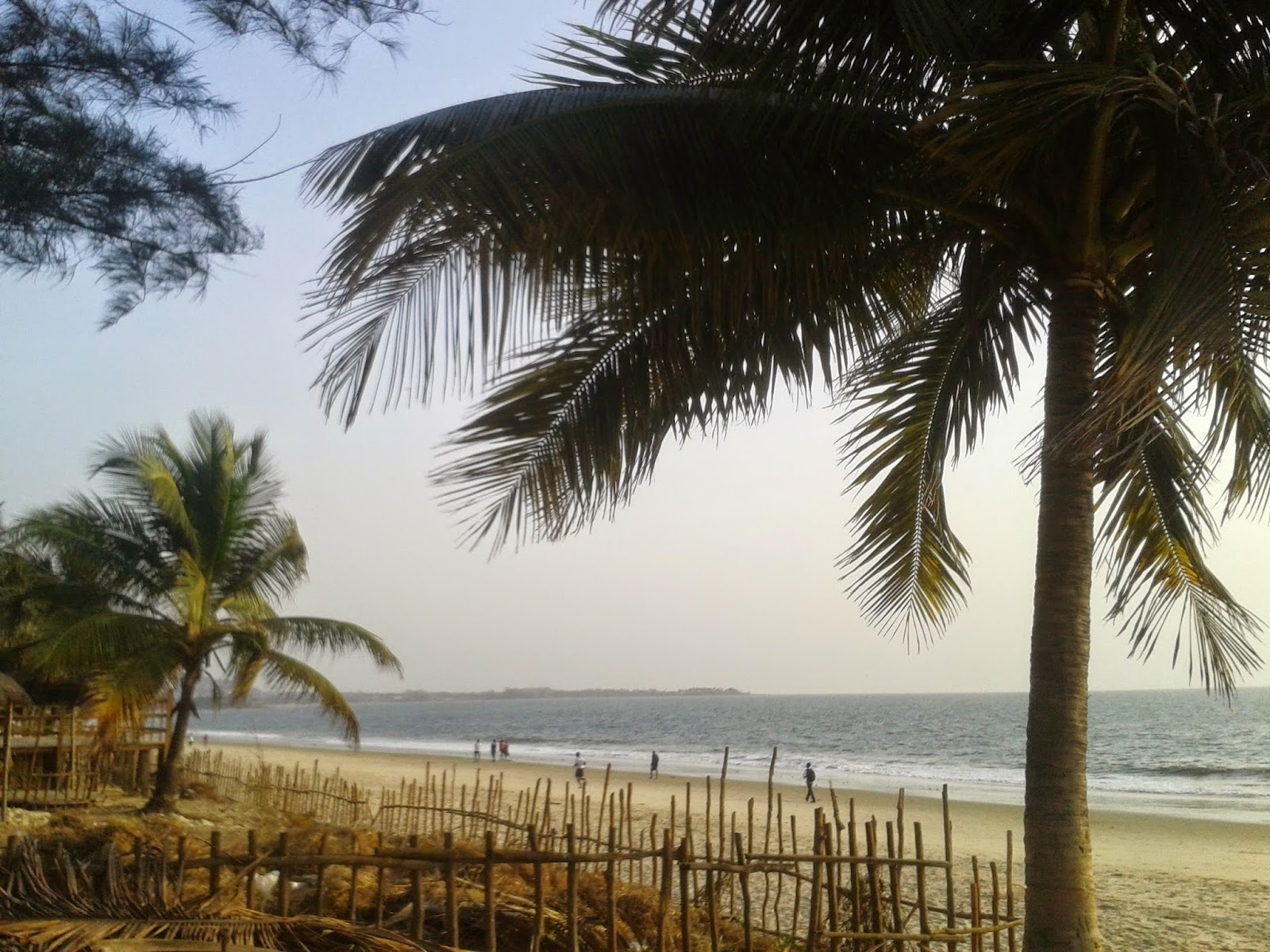 And then there's this statue on the other side of the road. Weird weird weird. 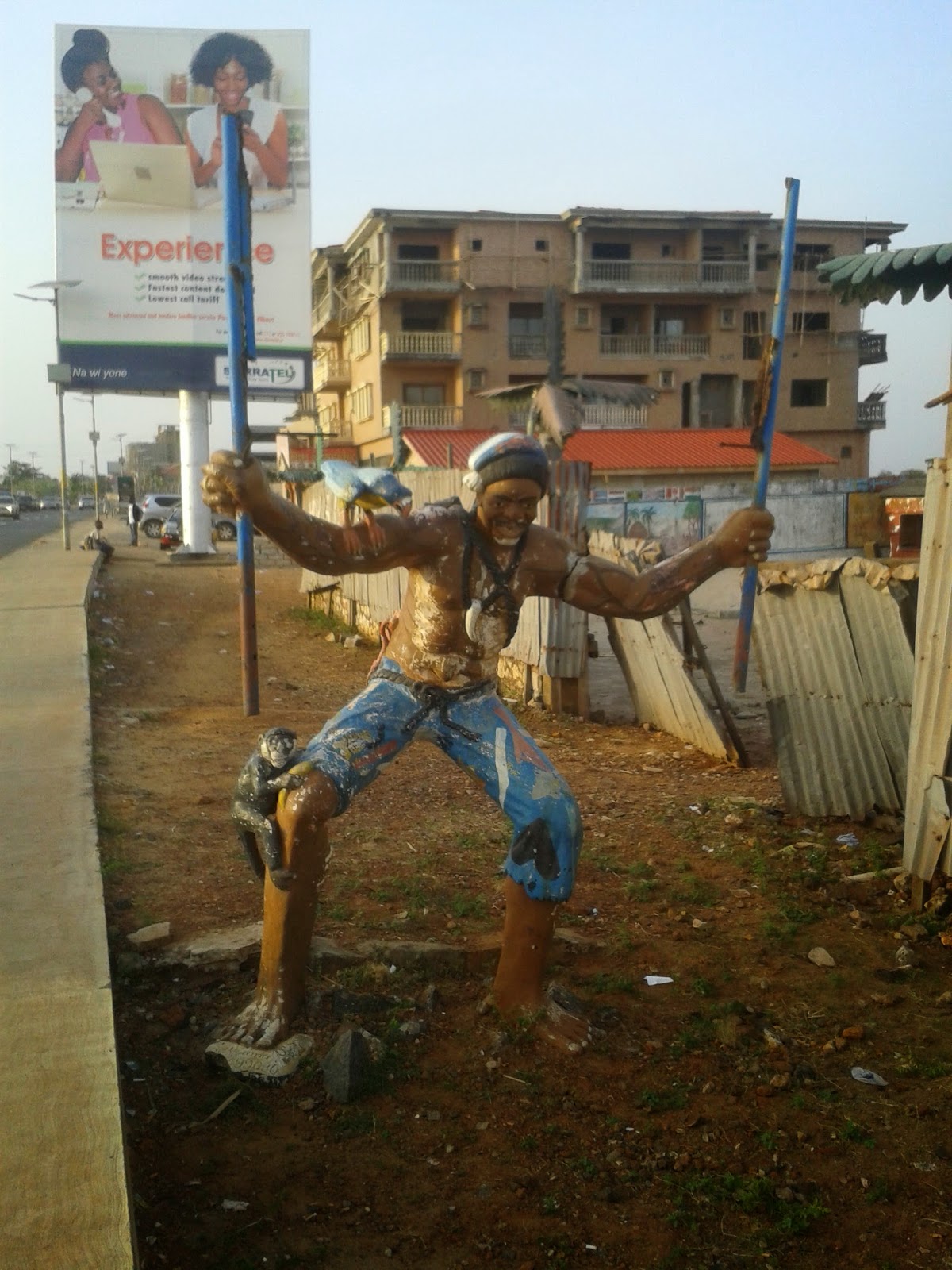 Today I'm heading up to one of the northern districts for a few weeks to cover for the manager while he takes some much needed R&R. I'm really looking forward to getting out and seeing the water, sanitation and hygiene promotion work the teams have been doing.