A good day, a great night

The other night, my two roommates and I decided it would be good at the end of each day to reflect on one good thing that had happened during the day. That had been a particularly bad day for me, and I struggled to come up with something. But I didn't have that problem last night, as we had the most wonderful day.

Instead of doing a little Christmas party for staff, we decided to hold off and make it a new year's celebration. We asked each of the teams to prepare some sort of activity or performance to entertain the whole team. I had no idea what to expect. I'd been asking various teams throughout the week how their planning was going, and it wasn't until Thursday that I started to see groups sneak off to rehearse.

We were absolutely blown away. Our Public Health Promotion team, which consists of about 40 odd people including volunteers, rocked up in matching outfits. They did a fabulous dance number, which included a surprise element of a fire dancer!! One of the team hadn't been able to do any fire dancing since the typhoon hit, and today was his return to performing and it was just incredible. I almost got a bit teary watching them (ok, I did actually tear up). 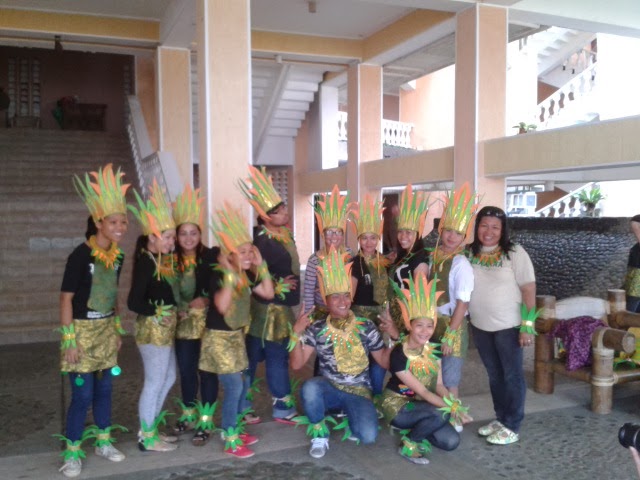 The next team up was a composition of our Public Health Engineers, Monitoring & Accountability and Gender teams. They also did a dance number, which while not as involved as the PHPs was a lot of fun and full of humour. They also ran a couple of games which brought a lot of laughs. 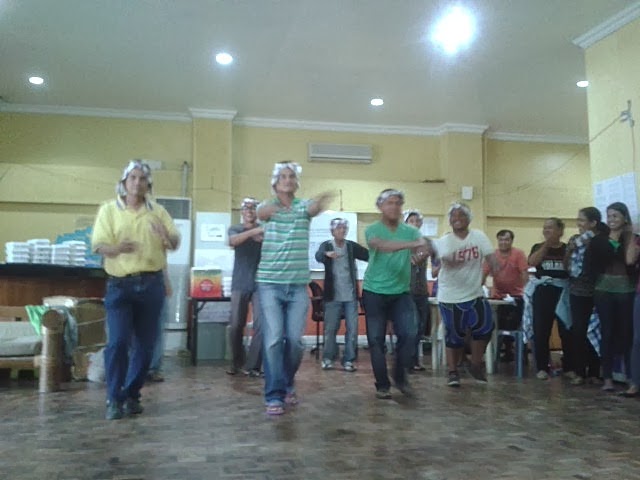 Next on stage were Finance, I.T, H.R, and Logistics. They started with a lovely rendition of We are the World, which was rather demure, and then launched into a Filipino song which involved the guys rolling their shirts up and our big Kenyan loggie donning a tutu and busting out some serious dance moves. Terrific!

After the lunch break, Jane and I surprised everyone with the first real performance of Spudnik this deployment. We changed the words of Eight Days a Week to apply to the Tacloban team which was met with lots of laughs. Thankfully we had an encore prepared: we pulled out the big guns by performing a Filipino song called Pusong Bato (in Tagalog) and frankly I don't think I've ever been met with such cheers before. It was so fun! But you know, we're rockstars so we're used to the adoration.... 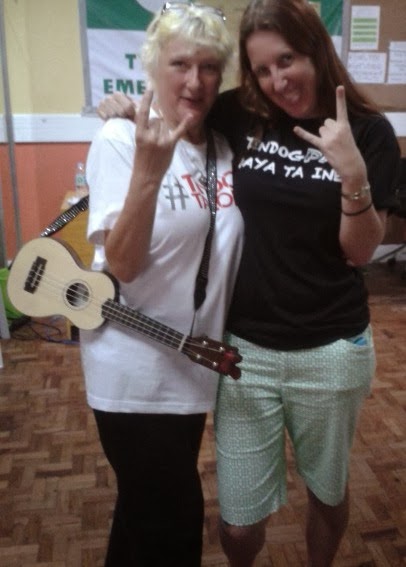 Our Emergency Food Security and Vulnerable Livelihoods team then staged an epic five station series of games, which provided a lot of laughter and squealing. One of the tasks was to come up with a team chant, and one of our distribution volunteers, a very sweet girl who's probably only 18 and is absolutely tiny, busted out this epic rap with some sweet dance moves and brought the house down.

We ending up awarding the prize for the best team (which was a meal out for the team) to the PHPs - every single one of them participated with enthusiasm and high spirits and they'd obviously put a lot of thought into the performance. The day ended with another activity from the PHP team, which was a dance along to this strange video of the song Funky Town, with this weird dancing alien. Hilarious.

And so the afternoon wound down, and some of us had to do a little bit of work. At about 6:30pm we decided it was beer o'clock, and we were just expecting a very quite evening. It was Jane's last night and the weather has been so bad the past few days that we didn't feel like going out, so we just went to the restaurant in the hotel as usual. There was a woman playing guitar and singing (she's very talented) and as the night wore on, more and more of us got up and sung with her, until eventually, she wasn't singing at all and it was just one person after another coming up and singing...with varying degrees of tunefulness! At one point some people in branded jackets came in, and we indicated that they should sing. Somehow the man who was obviously most senior found out Jane was leaving, jumped up on stage and launched into Leaving On A Jetplane (which had already been sung once or twice before...). I found out half way through his performance that he's actually a Senator!!

It was a night full of laughter, and I'm a bit hoarse this morning after all the singing. Those low key nights that unexpectedly turn into something wonderful are always the most memorable. We'll miss Jane terribly, but I'm glad we were able to send her off with a bang!
Posted by Carly at 1:18 PM No comments:

I normally would have written this blog post a few days ago, at the end of 2013 and looked back at the year and what it brought me, but I was a little bit busy getting stuck into my R&R, which has been extremely relaxing, and extremely needed! I rung in the new year with my friend Steph at a quiet little resort in Mactan, the island next to Cebu. We spent the evening by the pool, playing cards and watching the fireworks that lit up the sky every now and then. The best new year's eves are always the quiet ones!

It's hard to remember what happened in 2013. I spent the first half of the year in Lebanon, working on the Syria Crisis, which was a frustrating response as the funding we had was really limited. Conflicts are always more difficult to fundraise for, and this was no exception. But it was wonderful to be based in Lebanon again, particularly living in Beirut just down the street from my favourite cafe in the world, and catching up with the friends I made when I lived there in 2009/10. And the evenings spent with Jane and her ukulele on our balcony, re-writing songs to be about our colleagues and then performing them were some of the best of the year.

We had such great teams working in Lebanon and Jordan, and it was a lot of fun to work with them, even though the response was difficult. Seeing the Za'atari refugee camp in Jordan on a number of occasions was a new experience, I've never seen a camp like it, and doubt I will again. The size of it, the location of it, and the challenges around providing some of the 120,000+ people living there with the water and sanitation they needed were mind boggling. But our team managed that with aplomb, because they're legends.

The four and a half months I spent at home were spent hanging out with my parents, and Jules and Vardy on the weekends. It was nice to be vegging out at home, it felt like it took about 2 months to get back to normal after the stress of the Syria crisis! The road trip my Dad and I did to Canberra was so much fun, there's nothing quite like the Australian country side, particularly in a little red convertible! :-) Then of course there was the unfruitful apartment buying attempts, and while I loved spending time getting to know Melbourne better, and catching up with all my friends there, it was disappointing that I wasn't able to afford the type of apartment I want. Maybe in 2014....

And then to round out the year with a fast paced, high pressure response like the typhoon Haiyan response has been fantastic. The extent of the destruction is truly devastating, and the size of our response is impressive. We have a huge team in Tacloban, made up of internationals, relocated staff from elsewhere in the Philippines, local staff we've hired, and a fantastic team of volunteers (some of who have become staff) that have helped deliver assistance to over 200,000 people in Leyte, and over 350,000 in total across the affected areas. Not too shabby for less than 2 months of work. We're now planning the recovery phase, which will focus more assistance on a lower number of people, to help them re-establish livelihoods, and also make sure they have access to clean water and sanitation facilities. There's a long road ahead, but it's been an absolute pleasure working in such a motivated and enthusiastic team. And endlessly challenging for me in my new temporary role as deputy programme manager; I've learned a lot in the past month, about all aspects of managing a field office and it's been the type of professional development opportunity I've been looking for for some time. I'm thrilled to have been given the chance, and I'm doing a good job, the hard part will be leaving this role at the end of January and going back to my normal job!!

As for 2014, I think it's going to be a good year. I have certain goals in mind, both personal and professional, but I don't believe in new year's resolutions. Let's just hope that it's a safe and happy year for us all.

Now if you'll excuse me, I think it's time for another swim!
Posted by Carly at 2:29 PM No comments: