It's been a long, busy week in Tacloban. I spent a day in the field with one of our distribution teams, who started distributing tarpaulins, ropes, nails and hammers to families to provide them with a bit of temporary shelter. I was so incredibly impressed by the team. Most of them are university students, who were affected by the typhoon themselves but have been volunteering with us over their holidays. They are so enthusiastic and happy to be part of the response. I watched them stand in the baking sun, registering community members and handing them jerry cans and water treatment bottles, along with the tarps. I joined them in a row from the truck to the very organised lines of people, handing tarp after tarp down the line. They kept saying "ma'am Carly, you should go and stand in the shade," but were delighted when I told them that I was their assistant for the day. They told their team leader that they'd loved having me with them for the day as it forced them to practice their English (which is very good as it is!)

I spent yesterday morning around Tacloban city, figuring out where we could distribute more tarps. We drove along one stretch of road, just beside the water, and the devastation was mind boggling. The driver told me that after the typhoon, everything that had once made the houses along the water line had been blown onto the road and the other side. The road was now clear, and there were just piles and piles of timber, iron sheeting, and other household goods stacked up beside the road. One 6x4m tarp isn't going to go a long way here, as these families have basically nothing left, but I hope it will go some way to keeping them dry in the rain we've been having.

At one stop there were military and police hanging around, and they didn't want to let us walk down the road to the community we wanted to visit. We found out that the UN Secretary General was going to be visiting, but not for a couple of hours, so they finally let us through. There was a hive of activity going on, with people cleaning the road further, and trying to tidy up a little bit more. Looking around and noticing what had survived the typhoon was so interesting, a wall here, a door there, a toilet sitting out in the open. I haven't seen any of the coverage of Ban Ki Moon's visit, but I hope it brings more attention to the response, and the vast amounts of work left to be done. 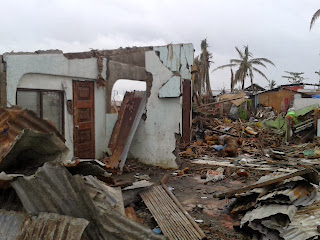 And so now it's Sunday and we have the whole day off. It really doesn't feel like Christmas in just a few days.
Posted by Carly at 4:23 PM No comments:

I arrived in Tacloban on Friday. For the first time in my life I travelled by helicopter, a free service provided by UNHAS, the UN Humanitarian Air Service. And it wasn't a dull beige or white like the UNHAS planes normally are, it was fancy and red. 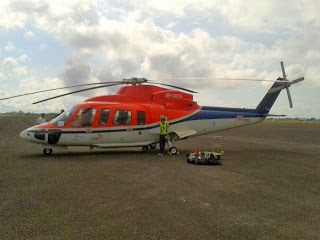 We hovered for quite some time, just off the ground, and so I entertained myself by reading the safety card. I interpret this as "in case of emergency, casually saunter from the aircraft looking uber cool" 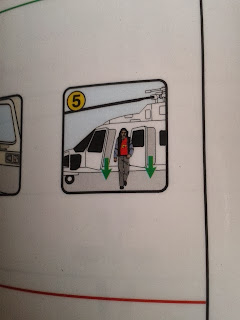 Light heartedness aside, as we flew closer to Tacloban, the devastation of Typhoon Haiyan became quite evident. 33 million coconut trees were destroyed by the storm. From the air I could see trees that had been uprooted, and flung horizontally into the ground. Then there was this: 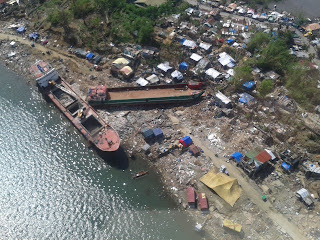 There wasn't a car available to pick me up at that time, so I jumped into a moto trike and was shocked and impressed at what I saw on the way. The damage is overwhelming. I've never seen the aftermath of a bombing in person, (wait a minute, yes I have) but it's what I imagine Tacloban, and other affected areas of the Philippines most closely resemble. But the other incredible sight to see, was the amount of work that's already been done. 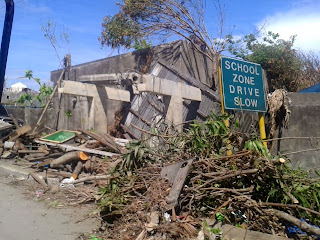 The trip to the hotel we're using as an office wouldn't have been more than 20 minutes, and the road was clear the entire way. Debris is piled up around everywhere, but the road has been completely cleared. 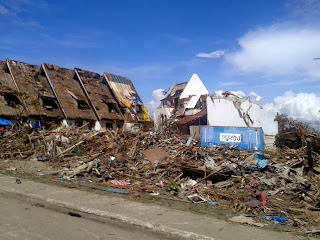 On Monday I headed south to two municipalities we had helped the local authorities to organise coordination meetings in. It was a sobering journey, to see kilometre after kilometre of mangled shells of factories, of small remnants of concrete houses, and vacant spaces where other homes used to be. 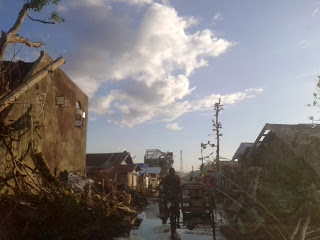 There were stretches of road where I could see where the storm surge had rushed in. Vacant lots covered in silt, people and homes just washed away in a matter of moments. The media has not over sold this crisis, it's absolutely devastating.

The organisation I work for has already done a lot of fantastic work. I'm here in Tacloban to help kickstart three areas of work, which unfortunately have no staff recruited for yet, but are really important elements to complement the water, sanitation and hygiene promotion activities, and the food security and livelihoods work that we do. It's a new role for me, with added responsibilities, so it's already been extremely interesting, engaging and challenging, and I'm looking forward to seeing the areas progress.

Even though there is a lot of work to be done, the people of Tacloban, of Palo, Tanauan, Macarthur, Mayorga and all of the other municipalities that have been affected, are absolutely inspiring in their resolve to pick up the pieces and rebuild their communities and lives. "Tindog" means "rise up" in the local dialect of Waray and that spirit is evident everywhere you go. We throw the word 'resilience' around a lot in humanitarian work, but the Philippines has it in abundance.

As we drove I noticed a lot of hand made cardboard signs saying 'we need water' and the words "help" or "SOS" spray painted on roads. And I also noticed twice as many hand made signs that said things like "Thank you to the world for helping us" and "Thank you for being here." There has been overwhelming support financially for our work here in the immediate aftermath, I just hope that the world won't forget about the Philippines in a few months.
Posted by Carly at 11:49 PM 1 comment: