What can I say about leaving Beirut? It's been a very interesting five and a half months. At times it has felt like a LOT longer than that, and others it feels like I've only been here a few weeks. Either way, it's been wonderful to be back in Lebanon, living in my favourite suburb, and down the street from my favourite coffee shop. My colleagues have been an excellent bunch - it would be hard to find a more experienced, capable and friendly group.

I had a great farewell on Saturday night with my lovely colleagues and special visits from Nicole, Chadi, Jenan and her lovely new husband Karim who all came down from the North, and Oli and Sara with their cheeky little monkey Sam so it was fantastic to have a little UNRWA reunion as well. It doesn't feel like it was 3 years ago that I last said good-bye to all of them.

I leave with mixed feelings. The Syria crisis will continue on for the foreseeable future, and there is so much work for the team to do, with limited funding available to do so. I hope it turns around for them soon, and they manage to deliver the fantastic programme they aspire to do. On the other hand, I can't wait to get home. I'm taking a long period of time off, to hopefully buy my own little cave, and find some semblance of a 'normal' life...at least for a while!!

So Chasing Carly may not be that action packed in the near future. I expect to be spending a lot of time in the hammock (winter where I live is still pretty warm and sunny) resting, and then cracking on with my sci-fi young adult fiction novel. With you all as my witnesses, I WILL have it finished by 31st August. (Incidentally, if anyone knows any 'young adults' who might be interested in critiquing the 25,000 words I have so far, do get in touch!)

Now I just have to get through the 24 hours of travel ahead of me...oh the joys of living in Australia!!
Posted by Carly at 2:29 AM No comments:

I was thrilled to get out of the office on Wednesday to help the WASH (water, sanitation and hygiene) team document the 'before' situations of a couple of the informal tented settlements they'll be working in. It's very useful to catalogue what facilities the sites have and what the needs are, so that when the work is under way and completed they can refer back to the document and photos to see exactly what improvements have been made.

There are over 270 tented settlements scattered across Lebanon. As there are no formal refugee camps established (other than the Palestinian camps that have been here for 60+ years) and the rental prices continue to increase, many families are moving into improvised shelters, made with wooden frames or bits of scrap material covered in things like plastic sheetings, cement bags, blankets or strips of hessian. Some of the sites are on government owned land, in other cases, Lebanese land owners are allowing refugees to stay. Sometimes they pay rent, sometimes they provide labour in exchange, sometimes it's free.

Some shelters are larger than others, and house a lot of people: 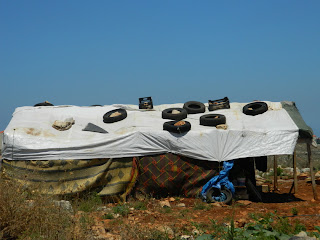 This room for example sleeps 12 people. While it looks quite spacious during the daylight, you can imagine how stuffy and awkward this would be at night, particularly as the weather gets hotter. It's too hot inside the tent during the day, but luckily there is a big shady tree outside where the families can sit. 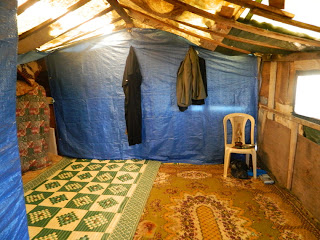 There was a small patch of concrete inside the 'tent' which they had converted into a bathing room. The rest of the flooring where they sleep is gravel underneath the mats and they're having problems with rats. 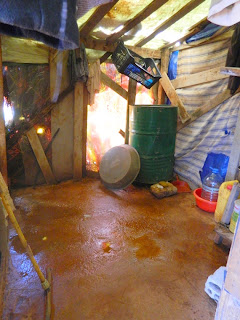 There were 5 families living in this settlement and they were really struggling. They had managed to construct a toilet for themselves, with a 'superstructure' made from an old water tank. While this was a big improvement on having to defecate in the shrubbery nearby, it still isn't completely private. The women have to go to the bathroom in pairs, so one woman can block the opening. Men will whistle or call out that they are in there. 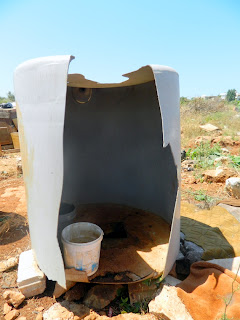 At the second site the shelters were generally smaller, and the facilities were also extremely poor. We were told that while there were a few toilets, the tanks were full so they were unusable. They have to defecate in the open, which is a real problem for the women, as they never have any privacy; "there are always men around." 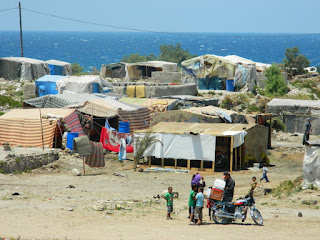 One particular family had improvised with their roofing: 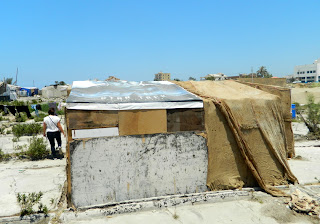 (It's a large promo poster for Star Trek.) This particular settlement has approximately 100 families living in it. My organisation will help provide them with better access to water, improved sanitation facilities, and also hygiene supplies and education on keeping clean with minimal supplies, all to reduce the potential for public health diseases, and of course, to improve the quality of life. We'll also provide an information and referral service, so that the people living in these settlements can find out what agencies can provide them with, their entitlements and rights.

It's a pretty awful situation to be in, no matter what, but if we can help make it that bit more bearable and safe, then that's a good thing.
Posted by Carly at 6:42 PM No comments:

It's been a long time! About three years since I saw you. I was getting really disappointed as I hadn't made it up to Tripoli in the past five months to see if you were still there. But yesterday, I managed to get up north. And I managed to convince my colleagues that we should come and see you to get some lunch. I'm so glad they agreed. At first I was a little bit concerned, because your shop wasn't where it used to be. But as we kept driving down the road I spotted your name on the signboard....directly under my old apartment!! You'd expanded to a shop twice the size.

I was very excited when I walked in, and you were very busy. But when you looked up and recognised me I was so happy! My colleagues commented that they were amazed that you recognised me, but I knew you would. It was nice to have a little catch up with you, and find out that you've been in the new shop for two years. When you asked if I was staying in Tripoli I was very sad to tell you that it was only for a quick stopover to get the best shwarma in Lebanon. But that made you smile, so I suppose it wasn't so bad.

I wasn't nervous at all biting into the shwarma, because I knew it would be delicious, and it was.

Thank you Shwarma Man, for making my day!

Love Carly.
Posted by Carly at 9:44 PM No comments:

There are teeny tiny kittens everywhere at the moment. Hiding out in little corners, peering down from ledges, everywhere.

Even on awnings. At my favourite cafe, cats seem to fall out of the trees that lean up against the awning constantly. They also climb up these trees quite regularly as well. I had wondered where they were going; sometimes they just seem to chill out in awkward positions... 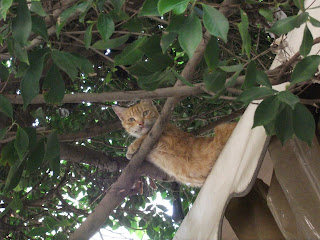 But it all became very clear, when I spotted these two little faces, safe and sound up high: 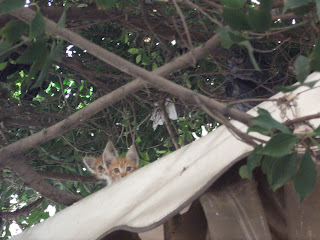 Super cute.
Posted by Carly at 9:12 PM No comments:

I know I've been slack

It hasn't been a particularly eventful couple of weeks recently. I now have less than two weeks to go of this deployment so there's a lot to do in terms of wrapping up, writing handover notes for persons unknown and just generally figuring out what needs to be recorded for posterity.

The numbers of refugees leaving Syria continues to rise, with over 1.6 million people now in other countries. The UN has launched its largest ever appeal for funding, some $4 billion...which is probably an underestimate and is only the funds needed until the end of the year.