A wedding, some parrots and a monster truck

I've been a bit busy. Last Saturday I went to my dear friend Elsa's wedding. Now, Elsa has already been married to her husband for a few years, but it was time for the Lebanon component of that. It was also a lovely Tripoli gang reunion, as a few of our friends are back in Beirut working on the Syria crisis, and a few people flew in especially for the wedding, which was so great. Elsa of course, looked absolutely stunning, and did a very good job of getting round all the guests and having a little chat. Unfortunately our photo was blurry. 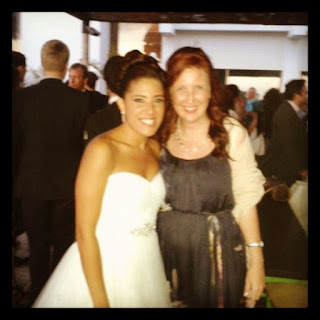 The evening was filled with excellent food and great music, with the dancefloor lit from below and above. Every so often the bride and/or groom were lifted up onto peoples' shoulders. Elsa's husband is French and it was really nice watching his relatives try and learn traditional dance moves. 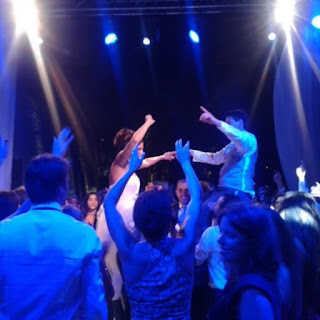 Other things that have happened during the past week or so....well, J and I are now officially regulars at our local cafe. We stop in each morning on the way to work and don't even have to ask for the usual. We say hello to the table of older men who gather there each day, and like magic our cappuccinos appear. On the weekend we tend to stop in for brunch, and the baristas are starting to get very creative with the foam. 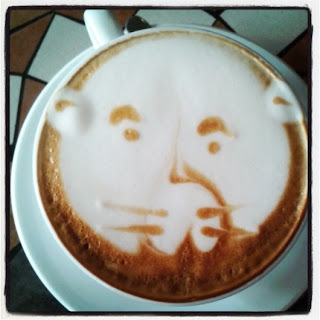 Across the road from the cafe there are two grey parrots. These guys whistle and squawk constantly, but every time I stop by them and whistle to them they ignore me...and then start up again as soon as I walk off as if to spite me. Little buggers. 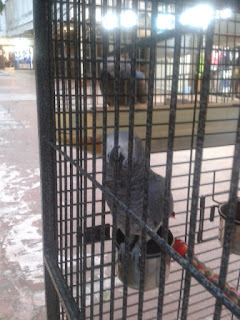 J has found this particularly entertaining, and has started seeing parrots everywhere...including in our bathroom. She dragged me into the bathroom the other night, told me to sit on the toilet and look at the toilet roll holder. 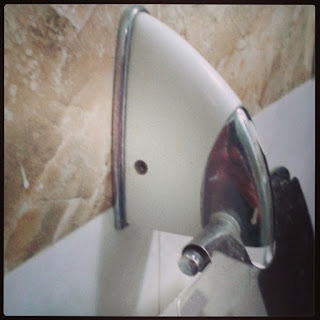 I started laughing because I thought it was an iron. We've become a bit silly J and I...after I inadvertently took a photo of our iron on J's bedroom floor and was accused of being obsessed with both the iron and her bedroom, we've taken to hiding the iron around the apartment. I tucked it into her bed, Godfather style stifling my giggles all evening until she found it. When I woke up the following morning and opened my curtains, the iron was outside sitting there outside my balcony door. So I thought she was being funny with the toilet roll holder and pointing out another iron - she thought she was being funny pointing out another parrot. Either way, we laughed and laughed and laughed.

I love this ridiculous monster truck that never seems to go anywhere. I did witness the owner trying to start it up one day, but the engine refused to turn over. 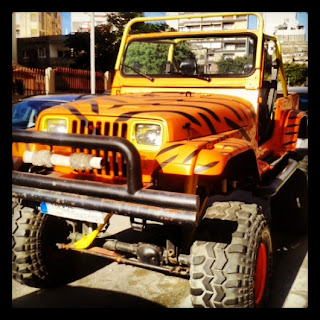 So that's a little bit of what's been happening around here. I've only got three and a half weeks left of this deployment, so I'm sure that will fly by very quickly and I'll be home before I know it!

Lazy day at Lazy B

Ingebjorg and I went to our favourite beach place on Saturday, Lazy B. Here's a photo of the two of us: 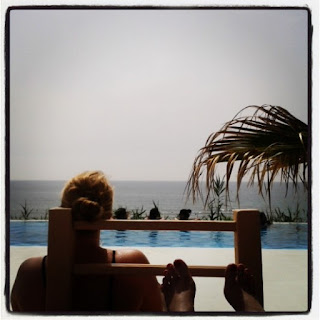 We were well prepared for our day at the beach. Even though we had a beach umbrella poised over us (and the man who was responsible for adjusting couldn't seem to understand that I didn't want any sun on me, ever) we took no chances and slipped, slopped and slapped. Ok, maybe just slopped, but slopped a lot. 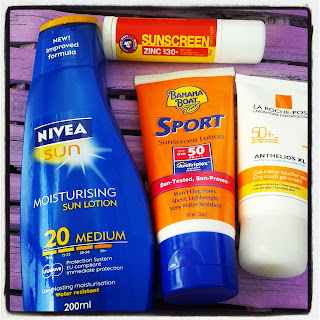 While it was a lovely day temperature wise, the same could not be said about the temperature of the water. The pool was quite chilly, I stayed in for about a minute. Later in the afternoon we went down to swim in the sea and it was only marginally warmer, but we managed to float around for a while. It's Friday afternoon, and I'm in the mood for a little silliness. Thankfully I didn't have to look too far for some silliness to share. In our office, we have a big room where there are loads of desks, a kitchen, a bathroom and two smaller rooms that have fewer desks. One of these rooms has a hidden room. On first and second glances, you wouldn't even notice the door, and if you did, you would think it was a closet. It's not just a closet, it's a water closet (a bathroom). Of course, the only logical thing to do was to name this hidden cupboard bathroom "Narnia".

Every so often someone asks where such and such is, and someone else will reply "Think they've gone to Narnia", and there are smirks all round. I went in there the other day and noticed a little grafitti on the standard sign that appears in all bathrooms in Lebanon: 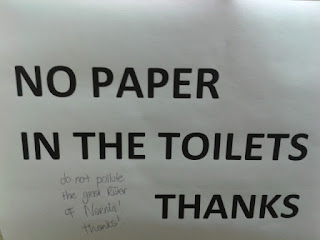 "Do not pollute the great river of Narnia! Thanks!"

It never fails to crack me up.
Posted by Carly at 9:14 PM No comments:

I found this site today, you can type in anywhere and it will make a watercolour map. Really cool! This is Beirut. I've tried it out with a few places, and I've bookmarked it as I think one day it would be great to print something out and frame it.
Posted by Carly at 11:32 PM No comments:

I'm afraid my life hasn't been too interesting of late. Lots of little things have happened, so I thought I’d write some vignettes.

Spaces and Singalongs
I moved into an apartment with a colleague last week. We each have a good sized bedroom and there’s a long balcony that runs the length of the apartment, but otherwise no communal space. Luckily, we get along like a house on fire so we don’t mind hanging out together. J has a little ukulele with her. She’s only been playing less than 12 months, but is already a member of a band and an orchestra, so we’ve been having little singalongs. We took it to another level on Sunday, by re-writing the lyrics of songs she knows to be about our colleagues, who we had over for a pot luck dinner. Everyone had their own song...I think my favourite is the one for our public health advisor, to the tune of Hotel California:

[Am] In a dark tented settlement, [E7] hot wind in his hair
[G] Warm smell of faeces, [D] rising up through the air
[F] Q­ ____ rolls up his shirt sleeves, [C] the hygiene’s bad here
[Dm] He pulls out his handbook to check
[E7]What he needs for Sphere

The iPod and the Smartphone
I finally took the plunge and bought a decent smartphone. It’s a Samsung Galaxy III Mini. I bought it from a little phone shop that I've been frequenting. It all started with my beloved iPod Touch soon after I arrived in Beirut. It managed to get a little silica ball (from the packet that came in my new handbag that I’d neglected to throw out that had split open and spread little balls throughout my bag) stuck right up inside the headphone jack. So I took it around to a few shops to see who would fix it, and these guys would. Unfortunately, when it came back the guy was extremely apologetic as he’d scratched the screen and couldn't find a replacement. He didn't charge me for the work they’d done and promised to keep looking. I called in a couple of weeks ago and they said that if they hadn't found a replacement in two weeks they’d give me a second hand iPod (the next generation) for free. We went back and forth on it and silly me waited too long to go back and they’d sold it to someone else. Totally my own fault, and I made the decision to buy a fancy phone instead. And not only did they give me $10 off, they also threw in a case for free. I like these guys.
Of course it has a camera on it, so I've joined Instagram to share such photographic wonders as my fluro orange nail polish, 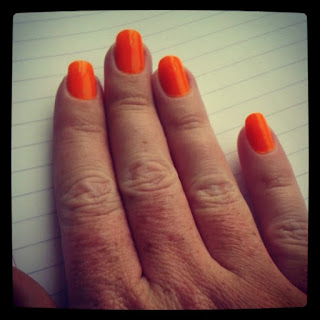 the veggies I chopped for a stirfry last night 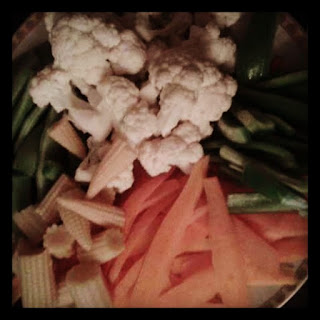 and this morning’s stop at my favourite coffee shop in the whole world. I'm trying to use a different filter for each photo... 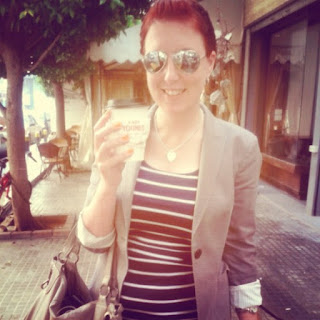 Keeping Time
Just days before I left for Lebanon, my watch of about 9 years finally packed it in (which may or may not have been related to a hot tub in Yemen) and I didn't have time to shop around for a proper replacement. So I bought a $19 watch from KMart. A few days into my deployment, I was telling a colleague about this and showing her the replacement watch, at which moment the band broke. I tried fixing it, I asked some guys with tools at a shop when I was buying a SIM card and they couldn't fix it. I wrapped up the little pin that had fallen out in a piece of paper and kept it safely in my purse, and in the meantime was challenged to buy the most blingtastic watch I could find for $10. I accomplished that. 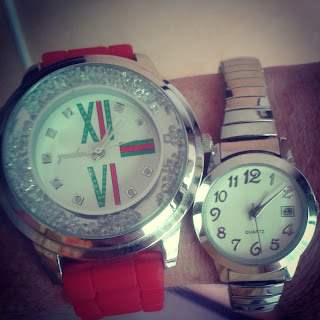 The problem of course with this $10 watch is that it didn't really keep the time too well, so when people asked me for the time I could only reply with "it might be 11:15". The other day I actually remembered to put the replacement watch into my bag as a reminder to duck into a watch shop when I found one. And since I now live in the best street ever, of course there was one just down the road. I handed it over to the guy along with the little pin that I had kept so safe, and he immediately fumbled it and spent the next few minutes moving furniture around to find it. It took him less time to actually fix it. And wouldn't you know it, after four months this watch has still kept the time..it somehow even managed to work itself onto daylight savings time!

Fire! Fire!
And this, excitement just at hand. We thought we could smell smoke, but didn't think too much of it. Then looked out the office window to see a fire truck. No-one seemed to be making much of a fuss, the firemen were just hanging around beside the truck, so we stayed put. About 10 minutes later a couple of firemen ambled very casually into the office and checked each room...the fact that we were all sitting very calmly at our desks didn't seem to indicate to them that there probably wasn't a fire in our office, and they ambled on out. They're still parked downstairs, I'm not sure what's going on, but there doesn't seem to be a fire....