I tried a conveyor sushi place for dinner on the weekend. Not only was the sushi great, but they have the cutest place mats! Win!! 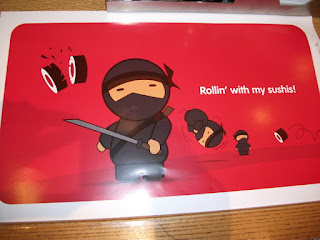 I spent a number days over the last week out in Palestinian camps and gatherings (areas outside of the formal camps where Palestinians have lived since 1948). When I lived here a few years ago I worked with UNRWA, the agency responsible for providing services to refugees from Palestine, and I was focussed on the reconstruction of the Nahr el-Bared camp (and Beddawi camp to a lesser extent) in the north. Those two camps were my reference point for what refugee 'camps' in Lebanon were like, so I was very interested to visit some of the others to compare.

Last Saturday I went to a camp that was only about 30 minutes from our office. While there is a clear entry (actually 11 entry points) to the camp, it wasn't immediately obvious that we were anywhere 'different'. After spending some time talking to one of our partner NGOs we were taken for a walk through the camp to meet people who had recently arrived from Syria. The camp has a population of between 17-20,000 living in an area about 1km square. As we wound deeper and deeper into the camp, the lane ways became more and more narrow, and the electricity and water connections were just crazy. 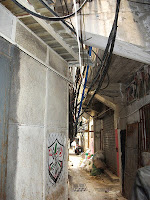 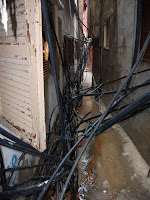 We spoke to a family, two brothers and their wives and children, who had only arrived from the Yarmouk camp in Syria a couple of days before. On that day, they'd been out for a picnic somewhere outside the Yarmouk camp and when they'd finished, they came back to find their house had been destroyed. Many of the people I spoke to in the coming days had also lived in that camp and had nothing to go back to. They were living in a common space, the landlord who lived above was letting them stay for free until they were able to find work and find a more permanent place to stay. Other neighbours had brought them clothes, food and gas for cooking; hundreds of families have come to the camps in Lebanon as they're cheaper to live in and the community are helping with whatever they can spare. Palestinian-Syrians register with UNRWA for support, and each family member is given $40 cash and also a voucher for food.

We went to another camp in the south of Lebanon, where we met a number of Syrian families who aren't receiving any support. Syrians can register with UNHCR, but the closest office is 30km away, and many families cannot afford the transportation costs to get there. This camp also has a big population, but the small part of it we saw was definitely less claustrophobic. 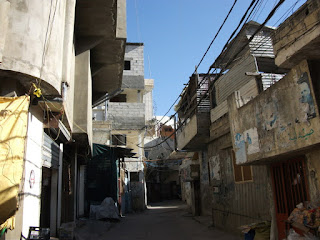 We arranged to have translators who were refugees from Syria, and were taken to meet a family who lived in a two room 'house'. The man, his two wives and their 11 children were all living in these two rooms which they would be paying $100/month for. Other men in the camp had approached the husband when he first arrived and invited him to work with them, but due to the big storms last week there hadn't been much work to find, and they were really struggling and were existing mostly on bread with lemon slices and salt.

The next assessment day was focussed on the unofficial gatherings outside of the camps, and there was such a difference in the conditions - one gathering was actually very nice, and there was obviously wealth in the people who'd lived there for a long time. The last one we went to was pretty awful. 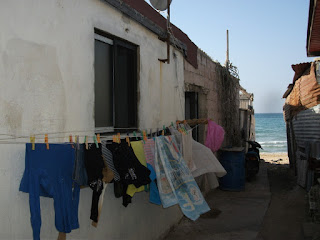 Yes, that's the sea, and it's very close to these 'houses'. During the big storm the tide came all the way up. I spoke to a family who were sharing one room, about 4m square with the man's brother and his family. It was cold, dark and dank. They'd come three months ago and the husband hadn't been able to find any work; they are totally reliant on assistance from UNRWA, other NGOs and the community. They had a baby who was 9 months old who was tiny. My translator, a mother herself, told me that the baby looked about four months old. The mother's breastmilk had dried up due to stress and they couldn't afford milk powder; the baby was eating the same food as the rest of the family, which was mostly bread.

I didn't get to speak to as many families as we'd hoped, but their stories were compelling and heart wrenching, and it's very clear that there are thousands of people in Lebanon that are in need assistance, and many of them are slipping through the gaps. It's going to be a long time before it is safe enough for them to return to Syria to start rebuilding their lives.

Yesterday was a gorgeous day. Four of us went for a stroll along the corniche and lapped up the sunshine, 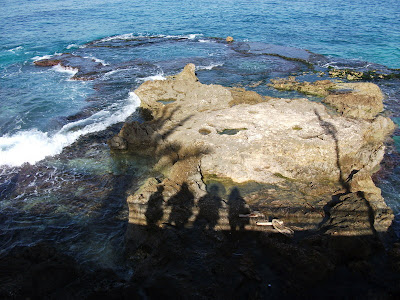 while very much also enjoying the blue sky and the blue water. 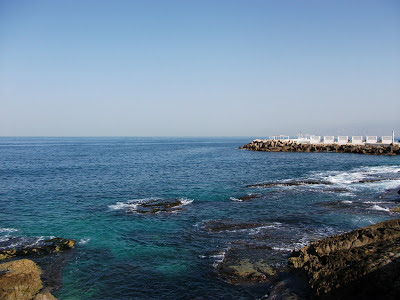 We walked and walked until we reached my favourite sight in Beirut. I love this mosque. Then walked just a little bit further to my favourite pizza place. 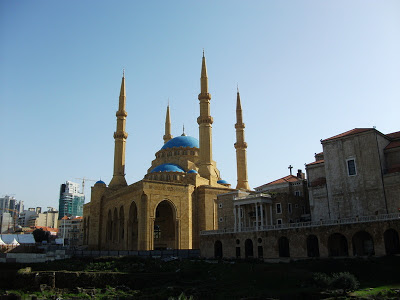 For a one day weekend, I couldn't have been happier.

Snow pretty far down the mountain range, as viewed from the Burj Barajneh Palestine refugee camp. 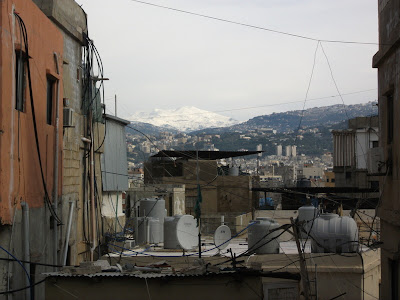 Thankfully the past couple of days have been a bit warmer. While I'm sitting at my desk (at 5:30pm on a Saturday) wearing 4 layers, scarf and beanie I'm much more comfortable than the people newly arrived from Syria that I met in the camp today. I'm not going to go into detail about it right now, but the situations of the people I was able to talk to, are really dire.
Posted by Carly at 1:35 AM No comments:

I arrived in Beirut at 3am this morning, after over 24 hours of travel. I'd been informed of the massive storms that have been happening over the past few days by the lady sitting next to me on the flight from Abu Dhabi and it is pretty miserable here. On the upside, I've got my own little serviced apartment - it's basic but comfortable. 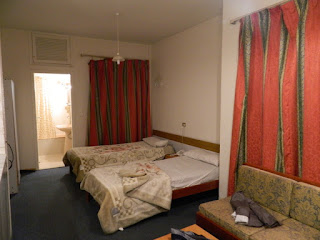 Apparently I can ask for a gas bottle and some pots for the woefully equipped kitchen (what you see is all there is) so I can at least make some coffee in the morning. 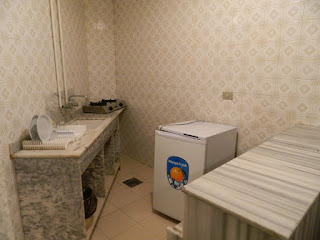 And this is the view from my balcony - basically about half way up the grey is all the sea, so on a nice day it will be a fantastic view, I'll take another photo then!! 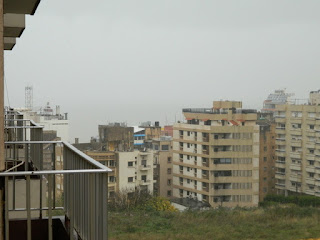 I came into the office in the early afternoon, and thankfully it's only a 2 minute walk from the apartment. I'm the third of the humanitarian crew to arrive and I'm looking forward to everyone else getting here and getting things moving. It's great to be back in Beirut, and by the feel of things outside, I think I'll have good reason to hit up El Dorado for a thicker jacket very soon! :-)
Posted by Carly at 11:49 PM No comments: