We moved into our new guesthouse a couple of days ago. While it doesn't have lovely doggies to greet us, it does have an outdoor space with a big tree and some flowers which makes for a nice change. It's a big house that's been divided into two separate apartments, with three women downstairs and five bedrooms for the men upstairs.

My bedroom looks out onto the big tree, which sure beats looking into the next door neighbour's lounge room. And it has a brand new bed that doesn't squeak and groan every time I roll over, and a chest of drawers AND a wardrobe...which is definitely better than draping my clothes over a pile of mafraj cushions! 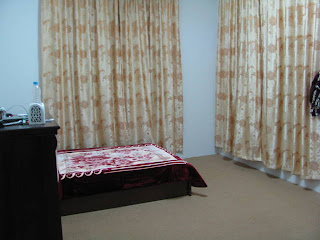 Our new kitchen has an oven that actually works, we've already made a delicious pasta bake and some roast veggies. What's lacking is any sort of bench space for chopping things, but hopefully this will be rectified soon. 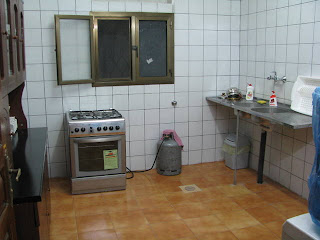 The lounge room is massive - I think this would typically be a mafraj as it's long and narrow. The dining table is a bit small, but it worked well enough for a game of cards the other night. 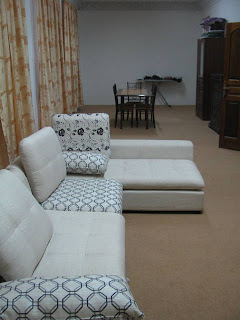 And finally, the very blue bathroom...there's something weird about coloured toilets don't you think? 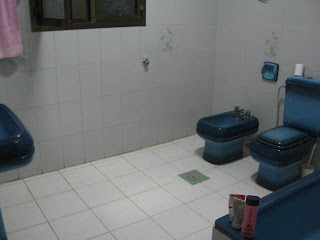 Today marks 8 weeks in Yemen for me, at the same time it feels like I've been here for ages and a minute. I'm really enjoying life in Sana'a, and I'll be getting out to our field offices in Aden, Al Hodeidah and Haradh in the coming weeks, which I'm really looking forward to. I know I've been a bit slack with the blogging of late, so I'll try to put a post together soon with an update on the situation in Yemen.
Posted by Carly at 6:16 PM No comments:

Today has been a big day, and it's only 11:04am. Housemate E and I started the day in a most fantastical way....pancakes!! 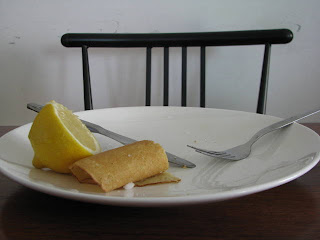 We decided half way through that these pancakes were happy World Humanitarian Day pancakes...in all seriousness, today is a special day in our sector, and while there may not be anything official happening, I think a lot of people will take a minute today to remember those colleagues who have been injured or killed in humanitarian responses.

Back to the lighter side of things, today is Eid, which marks the end of the Ramadan fasting month, and housemate K called to the kids downstairs to come up and get their presents. Mohammad was quite ecstatic. 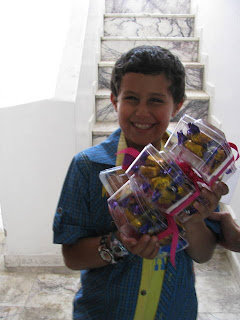 Zainab came up to show us her new Eid clothes, with her two little cousins (at least we think they're cousins), who were very cute. 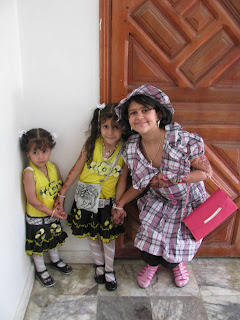 Afterwards, Marianne and I went downstairs to visit with their mother, who is a lovely lady. Unfortunately, she doesn't speak much English, and neither of us speak much Arabic so there was a fair bit of confusion most of the time. She fed us, and coated us in musk perfume (which was quite nice to start with but is now giving me a headache) and then insisted that I try on the below: 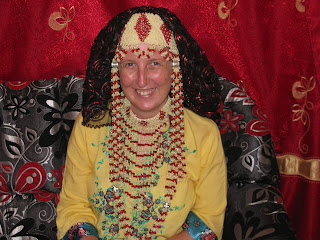 Marianne said I looked like a beautiful exotic princess. Of course after that, we had to give the Fluffies some Eid attention as well... 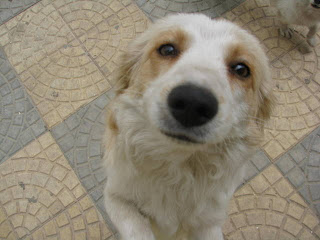 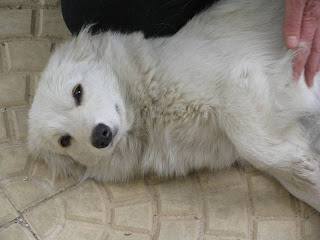 Happy World Humanitarian Day to my hard working colleagues and friends in the sector. And Eid Mubarak to all those celebrating over the coming days.
Posted by Carly at 6:38 PM No comments:

I don't know what came over me the other day, but I got stuck into some internet shopping. After selecting a very rad baby present for an impending birth (seriously, cool Aunty Carly wins again with this one), and my favourite dress in a new print at Asos , I stopped in at 6 dollar shirts the source of my much admired "I'm on a Boat" t-shirt where I couldn't resist Doctor Who and Hitchhiker's Guide t-shirts. I also couldn't help myself, for the low low price of $2.95 I ordered a 'random mystery t-shirt'...the print and colour is totally up to them, so hopefully it's something like this, and not like this. What was most awesome about shopping at this particular site, was the notification email I received...

Our minions have looked over and dropped their jaws in awe at the genius that is your amazing fashion sense. It takes true genius to pick such impeccable design and color combinations, so naturally our crews’ first instincts were to wear Kennedy masks, stick your order under their shirts and flee. Luckily shock collars and therefore self-restraint have been put to use and your order is safely packaged.

After the shocking and ‘Don’t tase me, bro’s were over, a ceremonial candle was lit and suddenly the entire 6dollarshirts crew felt a massive amount of dopamine release in their brains as our shipping specialist tenderly placed the shipping label containing the following request...

...As the package was sent on its way to you, our entire staff skipped out into the street and did a full out 5-minute Von Trapp family dance routine as we sang “So long, farewell, Auf wiedersehen, adieu, Adieu, adieu, to yieu and yieu and yieu,” in 18-part harmony. For the grand finale, Juggy hit the final “Goodbye” note and did a cartwheel landing in a split.

I can't wait to get home and acquire larger biceps and winning lottery numbers!!

Friday was another wonderful end to the weekend. The morning started with more Top Gun-esque volleyball playing and in the afternoon I headed back to the Old City with some colleagues to do some shopping. 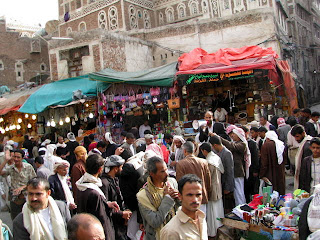 It was much more crowded than the last time I'd been, and it was quite an effort to wade through the streams of (mostly) men to get anywhere. We ended up at a fancy jewellery place to run an errand, and spent a lot of time admiring the antique jewellery and jambiyas (the cermonial knives that Yemeni men wear around their waists). 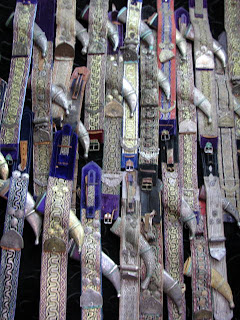 Earlier in the afternoon there'd been a bit of storm; it hadn't seemed that heavy at volleyball but it was enough to make driving through the Silah more interesting. The Silah is a road most of the time, but when it storms it acts as a drainage canal. Our intrepid driver Hossein decided to take us through, and it was quite entertaining to watch the people sitting on the sides being entertained by us. 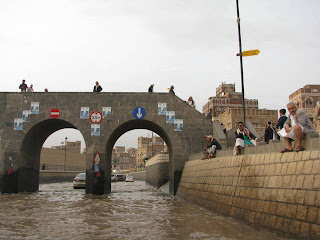 The storm clouds cast an ominous light over the Old City, but it didn't rain again. 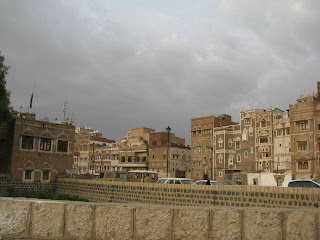 Once again I went up to the roof of the Burj Al Salam hotel and the view didn't disappoint. 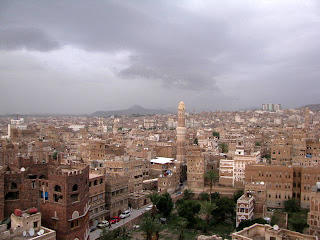 We decided to get iftar and dinner at the restaurant on the roof - also not disappointed! There was so much delicious food. While expensive relative to other restaurants, we thought it was still a pretty great bargain. 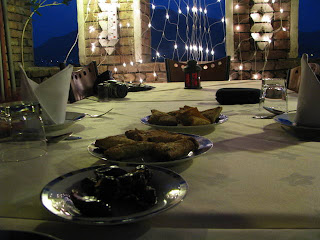 The drive home took quite a while, as every man and his dog seemed to be trying to get both ways down one way streets in the old city. There was a lot of beeping, reversing and fist shaking from all parties. We finally made it home at about 9pm, and I was looking forward to getting up to the apartment to admire some of my purchases. Of course, I somehow tripped up the stairs, landing on the knee I'd already scraped earlier at volleyball (it's a lovely shade of blue/green today) and smashing the beautiful white plaster/stained glass candle holders I'd bought.

Ah well, I got them for a steal, and it's an excuse to go back and do more shopping!
Posted by Carly at 6:00 PM No comments: 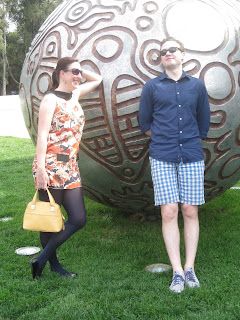 This has made my morning

The weather in Sana'a is a bit odd at the moment. The mornings and evenings are cool; I have a lovely breeze that comes in the window behind my desk in the mornings. At lunchtime when we head home for lunch (as it's Ramadan we don't eat in the office) it's sunny and hot but at around 4ish it turns blustery and then the rain comes. It usually pelts down for about half an hour, the roads flood a bit and when we walk home it's a matter of dodging the puddles.

I saw this video this morning and it bought back memories of Zanzibar - how I wish I'd had such an adventurous canine companion on my snorkelling trip!!

Bits and Pieces from Sana'a

I've been a bit forgetful with my camera, so apologies for the phone photos below. Last week a colleague invited a bunch of us over to her house for iftar and the spread was magnificent. There are quite a few Indian influences in Yemeni food, and samosas are a hugely popular iftar choice. Don't knock it til you've tried it - fish samosas are wonderful! There was also a crunchy salad, an injera that was topped with pomegranate seeds and mint yoghurt and a chicken curry. The bowl of pink stuff was chilli sauce, I stayed well clear of that. 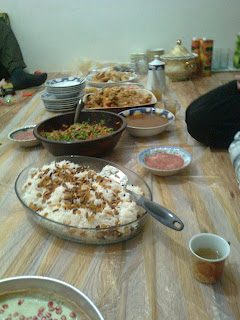 On Wednesday night, housemate E and I went over to a friend's house for a couple of glasses of wine on the roof. The drive home took a lot longer than it would during the day, as everyone is out and about until all hours of the morning during Ramadan. You can't really see much in the photo below, but there were so funky fashions available. 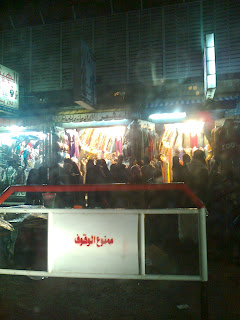 Finally, on Thursday night, after spending the afternoon playing badminton, drinking G&Ts, eating pizza and playing (German) scrabble, we went to a party hosted by an American NGO who had the most ridiculous guesthouse...it was more of a guestpalace. What demonstrates this best is the toilet: 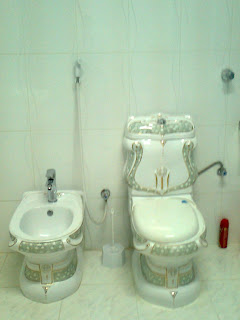 A throne if ever there was one!!
Posted by Carly at 8:50 PM No comments: