I'm heading to Juba, the capital of the newest country in the world, South Sudan on Saturday. Having come perilously close to going there before I started this job, I'm quite looking forward to seeing the place for myself. I'll only be going for 4 weeks to get the information management systems up and running (and writing a sitrep or two or three...) as we're expanding our programmes there to reach more people who are refugees or returnees, in an insecure context that is likely to suffer severe food shortages over the coming months.
I'm looking forward to all of the challenges that will come with being in the 'first wave' of staff going in to start the 'scale up' (the programme expansion) as it's been a while since my last proper emergency deployment.
The one thing I'm really not looking forward to is the weather... 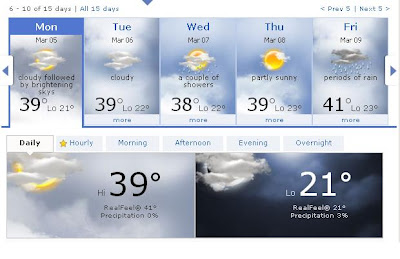 It goes up even higher the week after next...eep!
Posted by Carly at 9:11 PM No comments:

I spent a good couple of hours last night playing Kumiliki, a game in no way resembles Monopoly, except for the layout of the board, the rules, the whole concept... 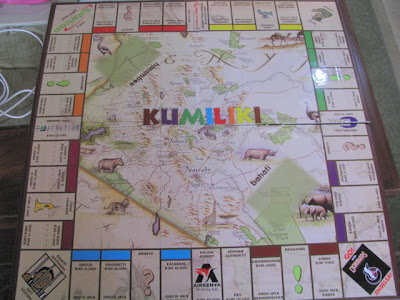 You can learn a lot about Nairobi and surrounds by playing Kumiliki; the most expensive square on the board (usually Mayfair) is Karen, the uber expensive suburb 30 mins from Nairobi. The green blocks are where the UN is. The least expensive square (usually the Angel Islington or something like that) is Kibera, the huge slum. It turned out that the suburb we live in just happened to be the square that we all seemed to land on most often - unfortunately another player had built 4 houses on the property, which charged 92,500 shillings (or about $920)...bye bye savings.
Another slight difference with Monopoly were the Chance and Community Chest cards, known as Harambee and Bahati...there wasn't an obvious pile of good and bad cards (like how community chest cards are normally more favourable than chance), and the bad cards were really harsh, like giving up all the property developed on a square if you didn't have planning permission. Ouch. And instead of railway stations, there are 2 airports and 2 shopping malls.
I lost dismally. I'm pretty good when it comes to Trivial Pursuit or Risk, but Monopoly, I mean Kumiliki, has never been my forte.
Posted by Carly at 7:27 PM 2 comments:

A Sunday Drive to Remember

I think I would have enjoyed my family's Sunday drives more when I was a kid, had they been more like my day yesterday. I went with two friends to the Sheldrick Elephant Orphanage, the Giraffe Sanctuary, and then about four hours cruising around Nairobi National Park on a little mini safari.

I didn't mind going back to see the baby elephants, particularly when there was a little weenie one this time and they also had a mud bath to play in. This was my favourite pic of the day: 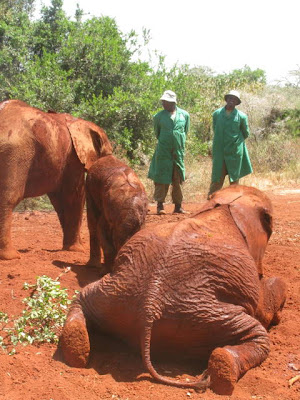 and I thought this guy was particularly talented...'look Ma, no hands!' 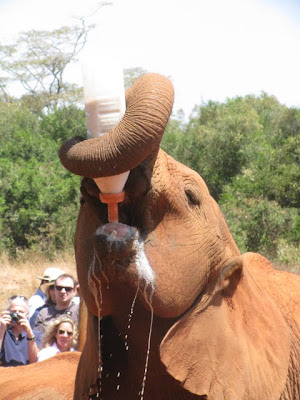 We stopped off in Karen (the suburb named after Karen Blixen) for a delectable lunch in a lovely garden before heading on. I hadn't been into Nairobi National Park before, so it was somewhat surreal to be on safari with high rises visible on the horizon. There were so many zebras, we saw three or four huge herds, but I liked these four the best. 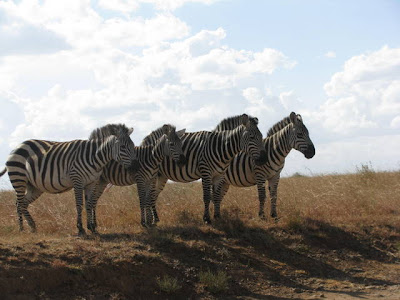 We'd almost given up hope of seeing any of the big five and were heading back to the entrance when we pulled up behind another car. You know when a car is pulled over it usually means there's something to look at...it took me a minute, but I spotted her eventually. 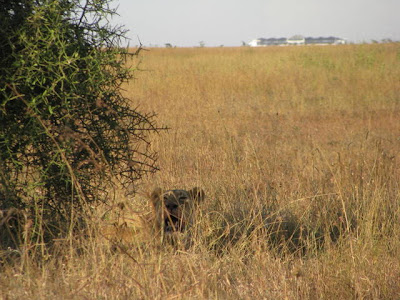 We sat and watched the lioness for a while, and finally agreed to leave her as the sun was beginning to set and it was time to get back to the entrance. The 'thuhdump thuhdump' we could hear as we pulled away from the lion wasn't a good sign. Paul, our lovely driver drove for a little while to get us away from the lion before jumping out to confirm that it was a flat tire. If you're ever looking for a way to speed up a tire change, just imagine you're surrounded by man eaters that you can't see!! Thankfully Paul got it changed very quickly and wasn't attacked by anything lurking in the long grass. 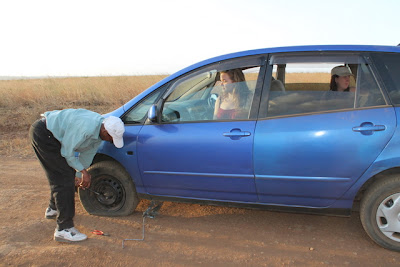 We hadn't made it much further when he slowed the car down again. There was a great herd of buffalo winding across the road. I'd only seen a couple of buffalo when I went of safari a couple of years ago, and didn't really see why they were so threatening. But when there are tens upon tens of them looking at you, it is a bit nerve wracking (particularly when you're in a little Toyoto hatchback!) 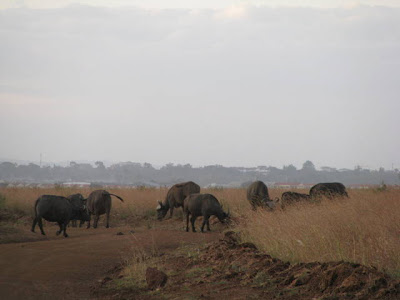 We were happy to sit back and wait for them to cross, but the car behind us drove around us and up to them, so we stuck close to him and made it through the herd with no problems. We were covered in dirt and hot and sweaty by the time we got home, so after a quick shower we settled in with beer and popcorn, and watched The Lion King...fitting!
Posted by Carly at 11:27 PM No comments:

It's ironic that I came to Kenya to do my work because I wasn't allowed to work in the UK, only to be told last Friday that I should work from home for the next week (at least) as there might be a spot check by the Immigration department and I (and others) don't have a work permit for Kenya!! So I've spent the past few days shuffling from couch to couch as the sun moves around the sky, cursing the internet as it drops out consistently (the skype icon turning green again is always a cause for mini celebration), but also enjoying the pleasures that working from home include (like working from the couch).
There hasn't been a whole lot going on otherwise. Last night I caught up with a friend who was part of the very small expat circle in Tripoli, Lebanon. She's been doing amazing things with ICRC since then, and it was really great to catch up on all her news, and the news of mutual friends.
So in recognition of days spent at home, here's a photo of a sunset from my balcony... 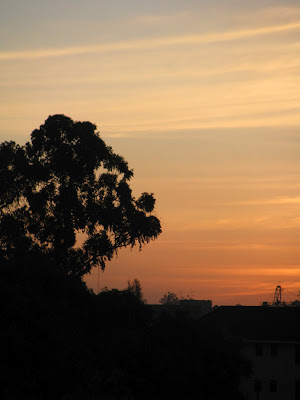 I was telling a friend last night that I continue to receive spam emails from a number of strange places (not strange like Nigerian bankers, but strange like places I've lived) and recalled the Hotel Agrabad in Chittagong - a hotel I never stayed at, and I can't even remember where the Agrabad district in Chittagong is.

Anyway, there were 2 messages in my spam folder this morning, and what a coinkydink:

We would like to inform you that, we are fully booked from February 17 to 23, 2012. During these period we are unable to provide you any room. If you already have given the room reservation then, kindly ignore this massage.

Have you ever had a hotel that you've never stayed at, nor are you planning on staying at, send you an email to tell you that they're fully booked up for six whole nights in a couple of weeks? Also, I don't believe anyone should ever ignore a 'massage'...
Posted by Carly at 5:20 PM No comments: