Wow. 3 months has certainly flown past! Today marks the end of this deployment. It's been an interesting experience, particularly the month I spent in Ethiopia. I do wish I could've gotten out to see some of the sites in Kenya, but not to worry (there's always a chance I'll end up back here next year...) I've really enjoyed meeting so many different people; with three country programmes and a regional centre, there has been no shortage of interesting, dedicated and friendly people to work with, and a couple of pretty great housemates as well!
As with most last days at the office, I'm just tidying up a few things, clearing out my emails, planning my holiday...the usual! I'm off on an adventure next week, then I'll head to Oxford for a couple of weeks, and finally home at the end of October, 6.5 months after I left for Liberia!
It's amazing how much work has been accomplished in the last three months, we've reached close to two million people with different services, including emergency water trucking, cash, repairing boreholes and distributing household necessities. 2 million people is a pretty impressive number, but there is still much more that is needed. If you haven't already donated any money to the crisis in the Horn and East Africa, please do so if you're able to!
Posted by Carly at 8:21 PM No comments:

A couple of weeks ago I went to Carnivore, a restaurant which is a tourist institution in Nairobi (and elsewhere) where you eat as much meat as you possible can, and once upon a time used to serve up all sorts of exotic game meat. Thankfully the Kenyan government put a ban on that a few years ago, so it only gets as exotic as crocodile, ostrich and camel. I went with a couple of old friends who were in town for work, and had a lovely evening being entertained by the servers carving bits of massive hunks of meat. 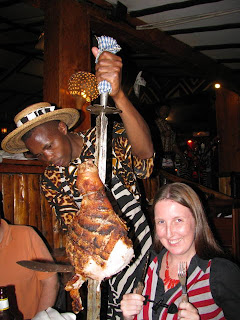 Yep, it's a touristy touristy place, but it had its charms, like the open roasting pit that greets you on entry. On your table is a little flag, and when it is up it signals to the servers to bring you every type of meat; while I drew the line at chicken gizzards, I did have a bit of an ox testicle, which flavour wise wasn't so bad, but the texture was weird - to be expected really. When you put your flag down, they stop offering you meat. 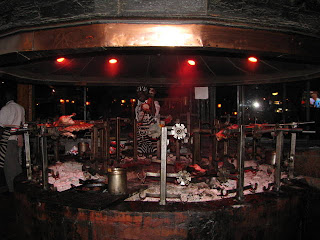 Last night a bunch of us went to Fogo Gaucho, a Brazilian restaurant that operates a similar way. Noticeable difference: we each had individual little tags that we could flip over to signal if we were ready for more or not. 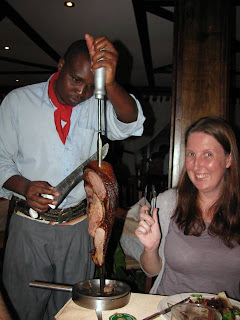 Final result: Fogo Gaucho wins on quality of meat. The range wasn't as extensive as Carnivore, but the cuts and cooking were much better. Atmosphere wise, Carnivore takes the cake as "The Gauch" (apologies if that means something totally offensive in Portuguese!) is a bit too stiff and formal (though the servers do wear awesome trousers).
Either way, Nairobi is the place for a Meat Fest!
Posted by Carly at 9:00 PM No comments:

When I first started this job I acquired a little video camera (Kodak Zi8 for those playing at home). I had a short, sharp introduction to video editing by the in house specialist, who told me to make a short film of my first deployment to Mexico and Guatemala. Yesterday I was given a hot tip on some free editing software (Camtasia), while I await an order that's been placed for another program, so I decided that it was finally time to have a crack at it. A little caveat - I did have weekends while I was there, so it's a mixture of work and play!
You'll want to make it full screen (or maybe you won't); for some reason I can't make it any bigger than this!
What do you think?
Posted by Carly at 1:51 AM 2 comments:

It's about 8:15am and I just sat down at my desk, well not my desk exactly, but the person who the desk belongs to is away for the week so I decided I'd like to sit next to the window for a change. So anyway, 'my' phone has gone all gotten all existential on me...it's a bit early in the morning for such questions no? 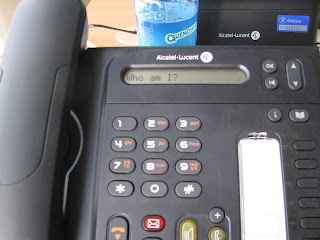 Not something you see everyday

I went for a 5 minute stroll to the ice-cream store to meet a friend. We sat outside, marveling at the sunshine which has been a bit of a rarity the past month of so. After an hour, I strolled home again, holding my breath down the little alley way near our apartment block that had such a stench to it.

I knocked on the gate and the guard opened it up smiling. "Hello!! We have a horse!" "We have a horse?" I asked, not sure if I'd heard correctly. He opened up the gate and let me in. "There are two horses! he exclaimed. And sure enough there were two horses. "What are the horses doing here?" "They're giving rides to the children." "Just around the carpark?" "Oh yes, just around the carpark."

So I patted one of the horses on the nose, and watched as a little boy was lifted onto a horse. His mother said that he would love it. But after a few steps she changed her mind and said he didn't like it. He was holding on quite tightly to the neck of the horse's owner, who was slowly leading the horse around the parking lot. And sure enough, a smile broke out and the little boy squealed with delight. 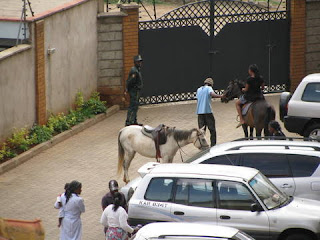 "Not something you see everyday," I commented to the guard. "No, not every day," he said with a smile.
Posted by Carly at 11:28 PM No comments:

How many continents are there?

Not as simple as you first thought...

An ode to Sandwich Man

Oh office Sandwich Man
you bring such welcome delights
when I don't think I can,
you get me through til night.
You spell my name as Cally
but you say it with a smile
and over receipt writing you dilly dally
it always takes a while.
Oh office Sandwich Man
I really shouldn't compare
but when I think of my dear Shwarma Man
his skills you do not share.
Posted by Carly at 7:29 PM 1 comment:

I only had one thing that I really wanted to do in Nairobi this time around, and that was a visit to the David Sheldrick elephant orphanage. I'd planned to go around my birthday, but instead, extended the anticipation by waiting for a friend to arrive. Our antipodean crew of 4 traipsed out to Nairobi National Park and the surprising lack of traffic on a Sunday morning got us to the orphanage about 40 minutes early. There were already quite a lot of people there, but we hung out at the entrance and when it was time to go in we were very close to the front. Friends had advised us where to stand (in front of milk bottles or a water barrel) so we had a prime position. 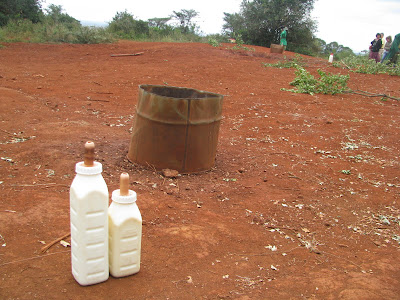 We stood around a roped off area, anticipation building as to where the little ellies would come from, and then seemingly from out of nowhere, they came trotting into the 'arena', ready for a feed... 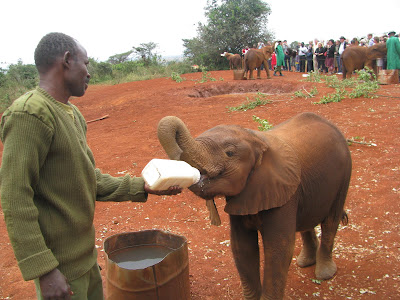 and boy did they suck down those gigantic milk bottles quickly! 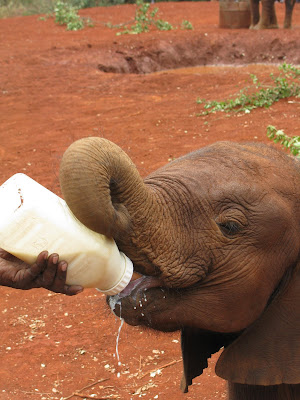 It wasn't just milk they enjoyed, big slurps were taken from the water barrel in front of us.

I'll just have to say that I find elephant bums (and fronts) adorable. 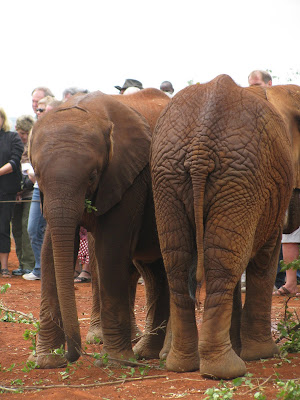 One of the keepers gave a lengthy speech about the work of the David Sheldrick Trust, and introduced each of the elephants to us.

With the keepers spending 24 hours a day with their charges, the bonds between them are really evident. 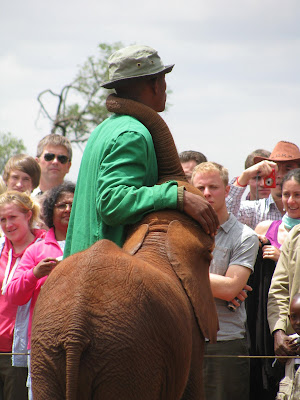 The elephants were brought out in two batches of 6, the first group (above) were slightly smaller so as the second older group came out, we could see that they were quite hungry indeed!


A couple of the older ones gave themselves dirt baths, but I was a bit disappointed that none of them seemed to want a mud bath. 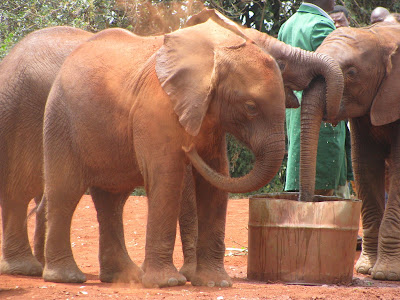 It was a wonderful experience, we even got to touch a couple of the little ones (their hair is quite wiry and they were very dirty!) and I can't recommend it highly enough. 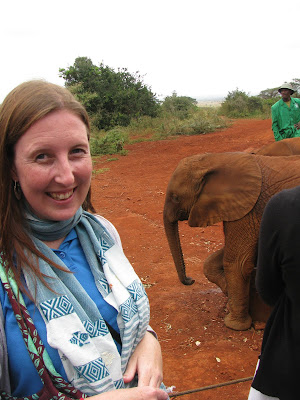 I managed to take an awful lot of photos of basically the same thing over and over, so if you're interested, the photos are here.

We rounded off the afternoon with a lovely lunch at Talisman restaurant in Karen, which not only had a lovely atmosphere but the food was delicious as well. Perhaps next week I'll head back out there to the Giraffe Sanctuary and get pashed by a giraffe!
Posted by Carly at 4:25 PM No comments:

To set the scene

I suggest you listen to this while I'm organising my latest post..

My month long sojourn to Ethiopia has come to an end, and I am now happily back in Nairobi. Unfortunately I seem to have brought the grim Ethiopian weather with me, with grey clouds and thunderstorms marring the weekend. With only about 4 weeks left of this deployment I'm trying to figure out what needs to be done, what can be done and how best to do it, which is at the same time frustrating and exciting. There is no lack of work when one thinks for more than a minute.

Someone on twitter linked to an article by Thomas Keneally, the Australian author, on the famine and food crisis. It's a great read, and I think it's summed up perfectly by the following:

Perhaps we must try a new theorem: to try to get the Somalis and the Ethiopians fed precisely because their governments have not yet created societies in which supply and support are taken for granted.

Aid agencies could be given breaks from endless pie charts about administration costs and aid delivery per donor dollar and stop pretending that they will be permitted to go everywhere they like and to do all the good they can. They should simply invite us into the general struggle to deliver aid as energetically, cleverly and well as the malign circumstances on the desolate ground permit them.

Hear hear! And here's the link to the article "War and corruption are responsible for famines, not droughts".
Posted by Carly at 9:52 PM No comments: