This is Lucy (sort of). She's 3.2 million years old and lived once upon a time in Ethiopia. 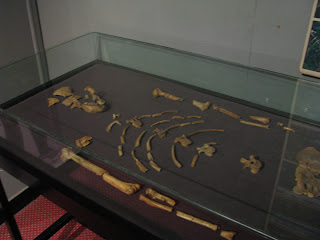 Why it's not really Lucy is because it's a cast of Lucy's bones, and the real bones are locked away in a vault somewhere in Addis to keep them safe. But they're very good casts and reading about Lucy was the most fascinating part of the National Museum of Ethiopia.

The rest of the museum is pretty grim. It smells manky. There's a weird assortment of bits and pieces, with explanations that are as detailed as "ceremonial dress" or "pottery jar ?" (far too many questions marks for my liking in a museum!) The second floor was an art gallery of sorts - a strange collection of religious paintings (including what must have been 5m x 2m painting from the 17th century that was just leaning up against the wall, though there was a rope in front of it to stop people getting too close) and then graphic depictions of the struggle against the Soviets. On the plus side, the small entry fee for locals (about 10 cents) meant that there were lots of fathers with their kids roaming through the museum.

As I was taking the photo of Lucy, two little boys ran past and stopped to remind me "no flash" which I thought was utterly adorable (and of course, I followed their instructions!) Further into the lower level where Lucy lives are all sorts of fossils and vague explanations of how fossils are made, and paintings of animals that may or may not have lived around Lucy's time, which included a mammoth that had tusks that pointed down (it was disturbing) and this: 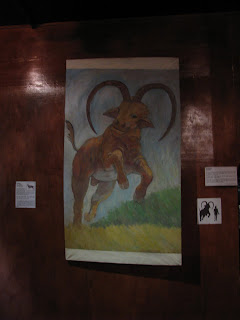 which looked to me like the My Little Pony of pre-historic antelopes...

For a rainy morning, it was a wonderful choice of entertainment, which was followed by a leisurely lunch in the restaurant next door, aptly named Lucy, during which the sun came out and became very pleasant. And of course, what better way to top off a Sunday than with a massage at the Boston Day Spa. Super!!