Though I was initially thrown by told I was leaving Oxford a couple of days earlier than expected, I was absolutely delighted by the fact that I'd have the whole weekend to explore Mexico City. And explore I did. I started on Saturday morning at the Frida Kahlo museum, which is situated in the house she lived in. Take a guess at the name of the house: 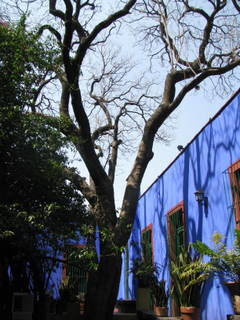 Yes, it's called Casa Azul, the Blue House. The museum is an interesting mix of her (and her husband's) work, set amongst pieces from their everyday lives. 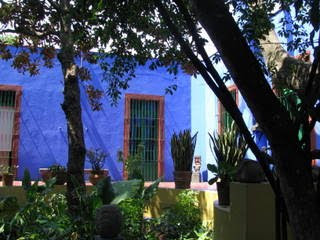 It was quite nice to sit in the garden for a while, admiring the blueness of the house, the statues that litter the garden, and of course the pyramid. You just don't see enough pyramids in backyards these days!! 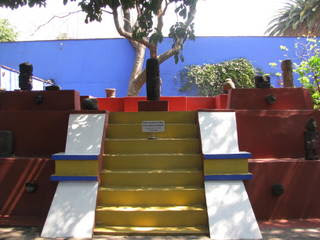 From there I headed to the San Angel saturday market, which was packed full of people. I love the sights and smells and sounds of markets, and I sat for quite a while listening to a brass-heavy concert band, which brought back many memories of doing similar performances when I was at school. On the request of a friend I bought one of the below pieces of embroidery, and think I'll have to go back next weekend to get one for myself! 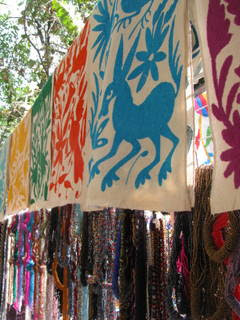 From there I crossed the street to the Museo de El Carmen, a former convent, which apparently houses lots of important stuff. One of the benefits of going to museums where you don't read the language (or only a little) means you don't get "museum-ed out" because you don't stop an examine every single item. I like to think this approach is more "holistic" and allows the visitor to take in all of the surroundings, rather than just the artifacts. Or perhaps it's just an excuse for my terrible spanish!! :-) 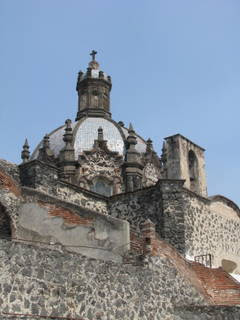 That being said, it was an interesting place, complete with mummies in the crypt! 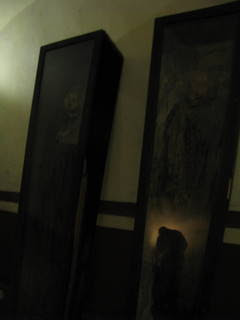 After all that, I was a bit tuckered out so headed back to my little serviced apartment to chill out for a while. Eventually I succumbed to the need for food and headed down to the place on the corner for dinner. It became apparent that eating alone is not typical at this place, and the staff were entirely confused about what to do with me. Thank goodness I'd thought to take something to read with me, to avoid their curious stares!!

Today started out with a visit to the centre of the city, for breakfast with an old amigo. He'd suggested a place on the 7th floor, which had a fantastic view of the main square, right at the large cathedral that dominates the vista. 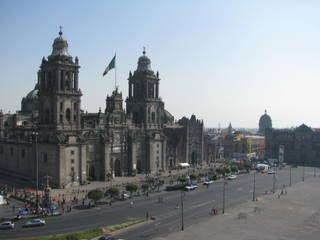 Roberto and I met in Bolivia a couple of years ago, and spent four days 4WDing around the countryside, a little jaunt that remains in my top 5 travel experiences. He's a fascinating guy, a biologist that does all sorts of adventurous things, including filming various tv shows. I've dubbed him the Mexican Steve Irwin. And it was fortuitous timing, he's off on another adventure, caving in the south of Mexico for the next two months, and just happened to be in the city this one day! 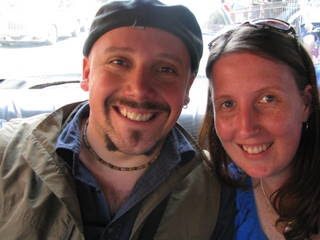 From that delicious brunch, I headed to another part of town to meet my new colleague, a Brit who I'll be training over the next week. She's a lovely hostess, and took me to Chapultepec, which is a massive (MASSIVE) park, inside of which is a castle. 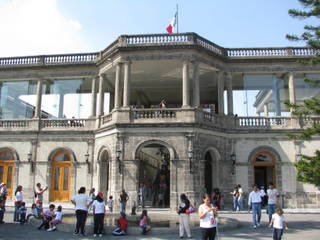 filled with Spanish paintings, clothing, as well as some traditional indigenous bits and pieces. There was also a special exhibition on the Golden Eagle (the national symbol) which included some great photographs of what appears to be an entirely majestic bird.

We walked and walked around the park with the intention of heading to the museo nacional de antropologia, but along the way my colleague got a call from some friends wanting to meet up for lunch (it was about 3:30pm by this stage). I was invited along and thought that sounded like a much more sociable thing to do than wandering around another museum (though I do really want to get there next weekend), and as such, had a wonderful afternoon with a lovely Mexican couple, who very kindly spoke in English the whole time. I will admit that more than a few Spanish words and phrases have come back to me, and I'm understanding more than I thought I would, but frankly, mi español es muy malo!!

It was 6:30pm by the time I got home, hot and sweaty (the temperature here is perfect!), with sore feet but very happy that such a weekend was had. Mexico me gusta mucho! I've put more photos up at the usual location. Now to prepare myself for work tomorrow!!
Posted by Carly at 11:37 AM 2 comments:

An update from Oxford

Of the many benefits to working in the humanitarian sector, I find over and over again that the best part is meeting people from all over the world. Just wandering around the office in the last ten minutes I’ve overheard conversations in French, Arabic and Spanish. I could pick up a few words of the Arabic conversation, but really useless things like “yes, I agree” and “what?” So it’s not like I’m listening in, just merely enjoying the multiculturalism of it all. Similarly, I love finding out where people are from. I’d been trying to figure out where a colleague was from, and it turns out they’re from Reunion Island. I’ve never met anyone from there before!!

I’m busy at the moment preparing for my deployment to Mexico and Guatemala. I’m going to train one staff member in the regional office in Mexico City, and then we’ll both go to Guatemala City to do some training with staff there and help set up their information management systems for a small response. Considering my only exposure to Mexico was a brief stop in Juarez a couple of years ago, I’m really looking forward to getting out and about in Mexico City and eating lots and lots of churros. And perhaps a burrito or two as well. But mainly churros! As for Guatemala, that will be my first visit to central America, but I don’t think I’ll have any time for sightseeing there.

One of the new things I’m looking forward to getting into is a bit of video work, I’m going to have a short session with the video trainer in the next couple of days, and he’s set me an assignment while I’m away. I’m to tell the story of my deployment from start to finish in 2 minutes. If I do a good job you might see the end result here!! The challenge is now for me to pack everything back up again (minus the small backpack of winter clothes I’ll leave here as I definitely won’t need them in Mexico – yea!) and try to figure out a way of managing all the electronics I’ve got. Two cameras, a video camera, two phones, two laptops, and endless adaptors, chargers, batteries, plugs...I feel like I need a whole backpack just for that!

A Whimsical Tale of Mediocrity

Regular readers will know the epic love story of Adam and Vardy and that they finally tied the knot last year. As one of the best men, I decided a speech was in order for the reception, but also decided that I wasn't witty or clever enough to write a funny speech of my own. So I read an excerpt of Dr Seuss's "Oh, the Places You'll Go," which seemed fitting for the globetrotting couple.

If it weren't for the weather I think I could happily live in Oxford. When you come from a country that's just over 200 years old it's absolutely astounding to visit places that have buildings about 1000 years old. There is so much history in this city, particularly surrounding the university (obviously) and it's delightful to meander around and wonder who else's feet have trodden the same paths. Yesterday was a beautiful day, and silly old me chose to spend a couple of hours in a museum rather than out and about. That being said, the Natural History museum is my kind of Disneyland and it's entirely possible that I could spend years exploring it. 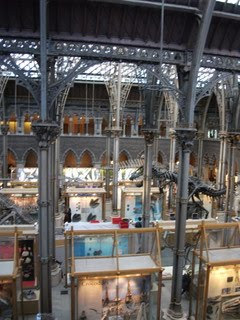 I'd been told that the Pitt Rivers Museum was a must see and that you had to walk through the main museum to get to it. It's hiding up the back and it's an overwhelmingly wonderful collection. Apparently there are 250,000 odd pieces, 150,000 of which are on display. 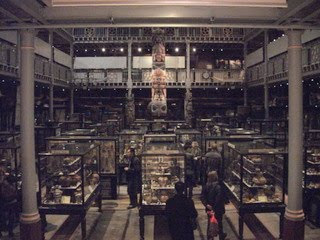 There was one thing in particular I was looking for, and it was such fun ducking and weaving through all the artifacts, until I finally found... 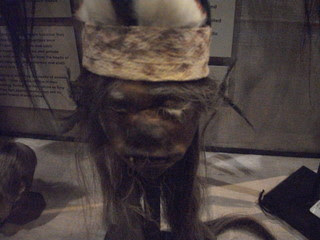 the shrunken heads!! Terrifically interesting and macabre. There was also a special photo exhibition on Wilfred Thesinger, dubbed "the last gentleman explorer", in particular his years in Africa. He spent many many decades living with different tribes in Ethiopia, Sudan and Kenya (among others) and the photos are really interesting. Eventually I'll track down the book about him as I reckon it would be a great read.

Last night I was able to catch up with my crazy friend Adam, who you may recall played a major role in starting this blog. He's studying outside London so it was a good excuse for him to put down the books and come spend the night in Oxford.

Today, in the dreary, drizzling cold after dropping Adam at the bus station I decided to do a walking tour (to cheer myself up I decided it was "atmospheric exploration") run by Oxford Walking Tours, which was fantastic. There were few places from the Harry Potter films, perhaps most randomly the tree under which Malfoy gets turned into a ferret by Professor Moody in #3: 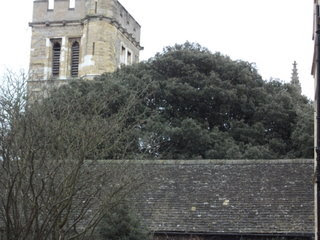 We went into lots of different colleges and churches and libraries. I particularly liked the Radcliffe Camera 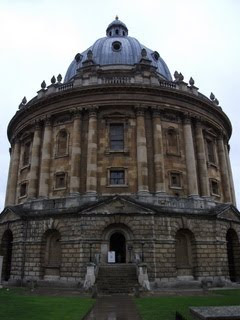 and found the colleges to be interesting places. Perhaps if I'd lived somewhere as beautiful as this 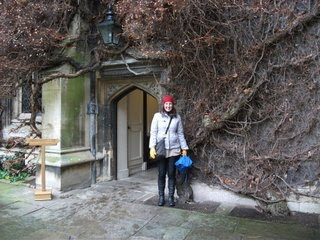 instead of the ghastly twin towers of Fenner Hall I might have been a better scholar! :-) Our guide snuck us into the tiny little church inside Lincoln College where a string quartet were utilising the acoustics.

This beautiful little church (I know that's not the proper word but for the life of me I can't think of it - chapel? rectory?) is the only one in Oxford that is completely original; hundreds and hundreds of years old and all that's changed is some lighting in the pews.

I regret not walking around more yesterday when it was sunny and warm(er) and I wish I had more time to explore Oxford. I'm off to Mexico for my first deployment next weekend but I'm not exactly sure what date. So I might have another day to explore or I might not. Either way, I'll be looking forward to my next visit here to see much much more!

I've been a bit busy of late, being inducted into my new job. Oxford is a lovely city, though I haven't done much exploring of late. Basically, it's cold. But I've met some wonderful new people, and am getting more and more excited about where I'll be heading off to first, which at this stage is still unknown. I'll try to get out and take some pictures next weekend. In the meantime, I thought this was rather adorable: