It's hard to believe that it's the last day of 2010. I started the year off with a pretty woeful new year's eve in Beirut (a mistake not to be repeated tonight...not only because I'm not in Beirut!!) I left Lebanon in July with a heavy heart - the wonderful friends I'd made, the food and the culture certainly made up for a relatively unsatisfying job experience, and it was difficult to say goodbye to such a wonderful group of people.

2010 took me to 5.5 new countries (the half is Ethiopia - I only count countries I've left the airport, and I did leave the airport in Addis, but couldn't leave the hotel the airline put me up in, so it doesn't quite count!!) and a couple I'd been to before, with some Bill & Ted-esque excellent adventures and bogus journeys. Finally going on a safari was a dream come true and the experience wildly exceeded my expectations. My week in Norway left me with a burning desire to see more of northern Europe - Iceland is at the top of my list, having made two Icelandic friends in Pakistan, I'd love to visit them and I also really want to see some puffins!!

Career wise, Pakistan was a great experience for developing new skills and meeting a fantastic range of colleagues. I knew early on that it wasn't the path I wanted to head down professionally, but it was nice to have the luxury of trying some new (and doing a pretty good job of it!) to determine whether or not it was right for me.

And so here we are at the end of the year. I'm heading into 2011 with the comfort of a full-time permanent contract (not something I've had for quite a few years!) but also the uncertainty of where I'll be deployed to first. A number of countries have been tossed up as possibilities, but as yet, I don't know which one will win out first. I'm so looking forward to a new challenge (and this job is going to be a big one!), meeting new people and going to new places. And of course there's always the chance that I'll run into some old friends around the traps which is something to look forward to as well.

So tonight, I will reflect back on the year a bit further over a couple of G&Ts, some excellent snacks, and some scrabble with my friend Julie. We'll take a break from all that excitement and take a walk to our regular viewing point to watch the 8:30pm fireworks! Scoff if you will, but my experience has proven that the best new year's eves are the ones spent quietly with friends, rather than crashing lame parties in Beirut!

Happy new year everyone!!
Posted by Carly at 5:03 PM No comments:

I figured from the title that there was going to be an extra kitty in this video - I just didn't expect it to be so adorable!
See more funny videos and Cute Animals at Todays Big Thing.
Posted by Carly at 10:16 PM No comments:

Grandma is now 102. I've told you about Grandma before, but that was way back when she was a spring chicken of just 100. 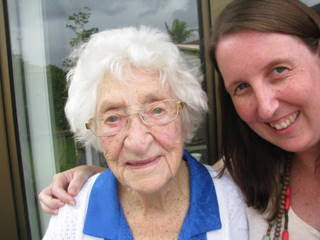 Grandma and co. came down for an afternoon tea catch up today, and while she's not so spry on her feet, her sense of humour is still sharp, as is her memory.
102. It blows my mind how cool she is!
Posted by Carly at 7:04 PM No comments:

It was a happy Christmas morning in our house today, even though the rain was pouring down. One of my favourite presents: 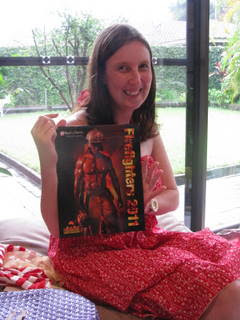 Sure to keep me warm all year round!!

Mum outdid herself with lunch this year - those who know me will immediately recognise lashings of apple sauce all over my roast pork (lonnnnnnnnnng overdue) and the chicken was delectable too. *Homer drool* 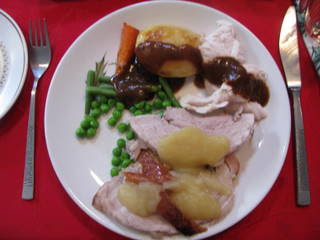 I've just woken up from the traditional Christmas post-lunch nap and am absolutely ready to get back to the feasting. Prawns and ham await, as does pudding with custard.

Merry Christmas to those celebrating today, and a happy festivus for the rest of us!
Posted by Carly at 5:11 PM No comments:

I'm home. Being home is great because I don't really HAVE to do anything. Sure, I COULD go through all the clothes that are piled up and figure out what to donate and what to keep. Sure, I COULD go through all the bank statements from the past months, and perhaps take one of them over to the driver's license place to finally change my license back from the ACT one I've had for years.

Instead, I've been doing fun stuff like hanging out with my friend Julz in Brisbane, watching all of the Harry Potter movies before going to see the new one. (It's alright, a bit slow in places, but at least they can act now.) And just puttering around home, marvelling at the temperate weather which is lovely, but not quite warm enough to be in the pool. Mainly just enjoying the little things that I've discussed before, that make being home such a wonderful place to be!

My brother gets home from Japan for a visit tomorrow so it'll be a full house for a while. There probably won't be anything exciting to write about, but maybe I'll find some cuteness to post!
Posted by Carly at 3:59 PM No comments:

I was one of the few Australians who had never been to Bali, and true be told, after four days there I really haven't seen much of it. Emma had decided to take her R&R there and I was happy to pick up a cheap Air Asia flight and meet her there for a few days. She'd booked a nice place in Ubud, a world away from Kuta Beach, also known as Australian Bogan central. When I landed at the airport and joined the queue for immigration I stood behind a couple of said bogans, one of whom had "Such is Life" (the famous last words of bushranger Ned Kelly before he was hanged) tattooed on the back of his neck. I assume they were headed to Kuta and was extremely glad I wouldn't be joining them there.

Ubud is extremely beautiful. If any of you have seen the movie "Eat Pray Love" then you'll recognise Ubud from the last third of the film. It's green, it's lush, it's a perfect little hideaway for a couple of girls needing an escape from Islamabad! Our first night was spent indulging in beautiful seafood and a bottle of wine at Casa Luna restaurant, and then a couple of G&Ts on our little balcony at the Honeymoon Guesthouse (which, as the name suggests, was full of smug married couples). The next morning, instead of waking up with a bit of a hangover, I woke up with a full blown flu and fever and spent the next two days in bed. Not fun.

By the afternoon of the second day, I'd had enough of the herbal remedies the staff had been suggesting, I could drink no more ginger tea and summoned the energy to walk into town (via the long scenic route) to get some real drugs. We spotted a pharmacy sign in a little alley and headed for it. We were greeted at the door by a tiny little girl, probably 3 years old. Her brother, who must have been about 7 was standing behind the counter. "Medicine?" he asked. "Yes, medicine," I replied. He pulled out a mobile phone and called (we presumed) his father, and handed me the phone. I explained my symptoms and then handed back the phone. The little boy then pulled out some drugs, which were thankfully labelled in English and I handed over a small sum. I don't know where the pharmacist actually was, but his little helpers were extremely cute!

After two nights in the Honeymoon Guesthouse we checked out, as the room we'd been given was right on the road and the noise was a bit much. We'd wandered around and discovered Nick's Hidden Cottages. 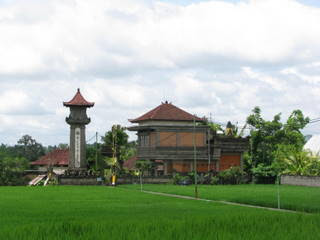 Not entirely hidden, but far enough down the road that you would only go that far if you were staying there. It was another little slice of paradise. 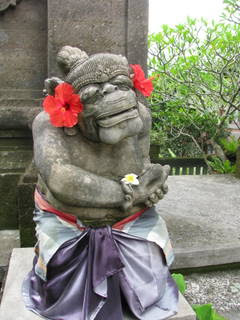 A big hindu festival was approaching, so all of the statues were dressed up in preparation for the celebrations. Ganesh also looked over us. 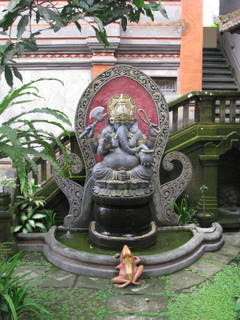 And so we spent two more lazy days, enjoying the pool and doing a bit of wandering. 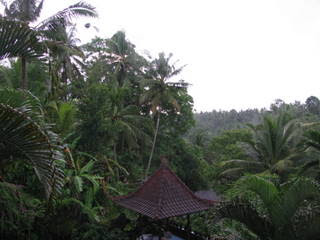 I'd planned to knock quite a few Christmas presents off my list, and thought I'd get it all done on my last day. Unfortunately, this was the day of the celebration and most of the shops were shut. It was hot and steamy as we wandered the length of Monkey Forrest road (I didn't have time to go into the actual Monkey Forrest) trying to find the things I'd spotted earlier but hadn't bought. Of course, as we were finishing up the shops started to re-open, but it was too late to worry about the compromises I'd had to make on some gifts. There was enough time for another quick swim and to repack my stuff, and then head back to the airport (only an hour away).

It wasn't quite the mini-break I'd had in mind (nor Emma I imagine!) but it was a nice little introduction to Bali and I'm sure I'll be back there one day to take better advantage of all the island has to offer.

And now I'm in Melbourne, where unsurprisingly, the weather has been oscillating between sunshine and winter, and now a downpour has started. It's been great to catch up with my oldest friend Katie and enjoy the wonderful coffee in this city. Tomorrow I head up to Sydney, or to Wollongong more specifically, to spend a few days with my new niece Audrey. I'm looking forward to some quality time with the Martin family and then finally home to the Gold Coast on Wednesday.

It's so nice to be back in Australia, and know that I don't have to leave for about six weeks!!
Posted by Carly at 11:58 AM No comments:

The few days I had in Kuala Lumpur were not entirely action packed, but I did manage to do some important things, like shopping in Chinatown!! I was glad I made the (short) trek out to the Batu Caves, it's a seriously cool place with this fantastic statue - which can see through the binoculars on the 86th floor of the Petronas Towers - and a measly 272 steps to get up to the top! 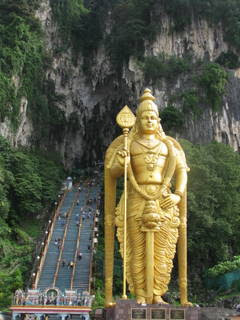 The cave itself is beautiful, very atmospheric, with lots of mini temples inside and offerings all of the place. 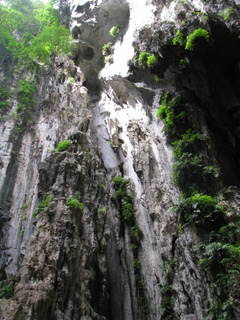 But what makes this place most interesting is the sheer number of monkeys. Monkeys above, monkeys below, monkeys monkeys everywhere. 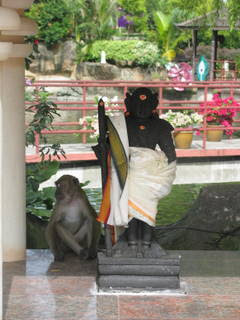 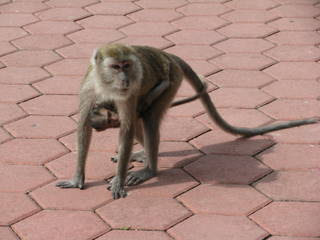 I wasn't stupid enough to get anywhere near them, but that wasn't the same for everyone. 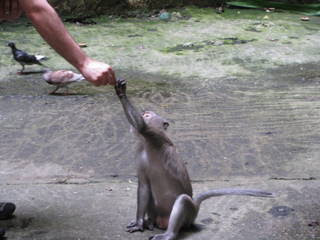 The other touristy thing I managed to squeeze in was a trip up the Petronas Towers. There are a limited number of tickets for sale each day, and I think I got there just before 8am and there were already a couple of hundred people in front of me. The earliest ticket I could have gotten, when I finally got to the front of the queue some two hours later, was at 4pm but I chose to go at 6ish to catch the sunset.

A smart choice, even if I do say so myself. 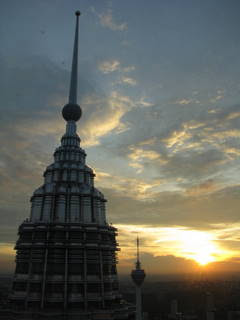 The towers are quite the engineering feat, and look beautiful lit up at night. 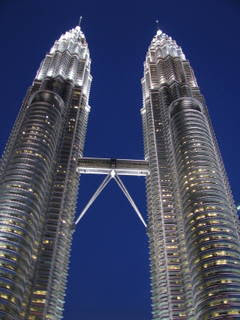 From KL I headed to Bali to meet up with Em, but that's a story for another day (when my internet time isn't about to run out!).

I'm heading home to Australia this afternoon and am not looking forward to getting into Melbourne at the ungodly hour of 2am! But it will be wonderful to be back in the land that's girt by sea.
Posted by Carly at 12:45 PM No comments: