It was lovely to meet Nour this afternoon (I've literally run upstairs after saying goodbye to write this post) and I was very nervous for Shwarma Man as today was the final showdown for the Best Shwarma title. I knew the competition was going to be tough, having read Nour's description of the shwarma in Amman as "magic". 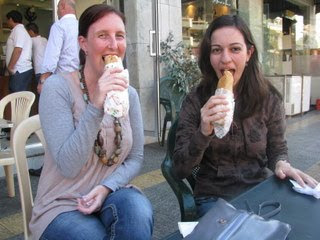 I'm not going to drag it out, I know the anticipation is killing you. Nour said that this shwarma was the second best shwarma she'd ever had. Unfortunately for Shwarma Man, the Jordanian shwarma has lived up to its proclaimed title as "the best shwarma in the Middle East". I know you must all be disappointed for Shwarma Man, I was too, but even with this verdict he's still number 1 in my book.

While today is a sad day for Lebanese shwarma, it was also a nice occassion to meet someone I've been connected to through blogging. There are many other bloggers out there that I hope to one day meet, and it was great to have the opportunity here.

So thanks to Nour for being an impartial and honest judge!
Posted by Carly at 11:28 PM