We headed down to Beirut this afternoon to check out our colleague's art exhibition. I'm just going to copy what's written on her flyer for an explanation, because I'm not really an arty person and she obviously knows how to explain her art much better than I could ever begin to.

Saba Innab is an artist and architect whose work is concerned with urbanism and the processes of space production and reproduction. Her architectural practice in Amman, Jordan landed her recently in the reconstruction of Nahr el-Bared Camp. Saba's artistic practice is very much influenced by her architectural work and a critical examination of cities and places. Her work probes construction/destruction as a process/form which in itself builds its own content, despite its contradictory state of being. Rather than static architectural forms, devoid of context, the works metamorphose into living bodies. It was interesting that when we looked at many of the pieces, we proclaimed they must be of Nahr el-Bared, but when Saba took us through them, it turned out that most were not of destruction at all. 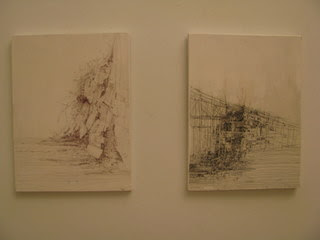 I was so impressed by all of her works, and wish I could afford to buy one!
Posted by Carly at 4:37 AM