A friend who's still in Bangladesh posted a link to an article in the very reputable Daily Star (to which I once sent a letter to the editor) which discussed the health risks of the two taka note.

Two taka notes are the most disgusting things known to man. Try as I might (ok, a 20 second google image search), I can't find a photo of the typical two taka note. Go ahead, search for yourself, and you'll only find pristine examples. I think in my one year in Bangers, I saw one such note. The two taka note is the smallest of all notes, taking wrinklage and shrinkage into account, usually about the size of a business card. It was almost as if you could see the bacteria hovering on the note, and now, it's been proven that they are indeed, festering with bacteria.

My favourite line of the article is towards the end as reads: "Instead of avoiding or cleaning money, the best protection is to wash hands with soap regularly." Now, I once saw a woman (in Washington D.C) in a bathroom giving her US dollars a nice rinse in soapy water, and then drying them lovingly with some paper towels, but I don't think she was quite all there. But back to the point about cleaning money, I have, at this very moment, a 500 taka note (about $8) in the little coin pocket of my favourite jeans. The jeans that I wear a lot. The jeans that I wash a lot because I wear them a lot. This 500 taka note is still in great shape (remembering that I left Bangers in September 2008), and I imagine by the time I'm ready to go back to Bangers for a holiday, it'll still be in pretty great shape. My own scientific research has led me to the conclusion that the higher the value of the taka, the better cleaning survival it has.

I present to you my incontrovertable proof: 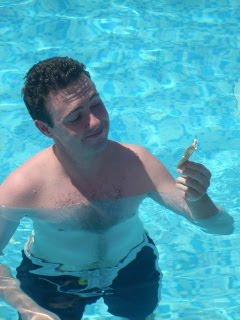 My friend Jez, in a pool (at the Dead Sea Marriott, natch), with a five taka note he found in his pocket after entering the pool. The five taka note didn't really survive. So if this is what happens to a five taka note, imagine the damage to a two taka note!!

The Daily Star is absolutely right, people should not attempt to clean their two taka notes, or their five or ten taka notes. I think it's safe to say, that unless you're holding 500s you should clean your money at all. The other advice the Daily Star presents, that of avoiding money, is one I don't think will be as difficult to ensure. You find me one rickshaw walla in Bangladesh who would avoid money over being exposed to some bacteria, and, well, I'll say "well done you".

Daily Star, you've brought joy to my evening.
Posted by Carly at 4:35 AM