Today is the fifth anniversary of former PM Rafic Hariri's assisination. On 14 February 2005, a car bomb with the equivalent of 1000kg of TNT was detonated, killing Hariri and 21 other people in Beirut.

About a week ago large posters of Hariri started appearing everywhere. The drive down to Beirut yesterday saw hundreds of huge sign boards bearing his face. There was going to be a huge memorial/celebration today in downtown Beirut, so Najwa and I decided to get out of town early to avoid the masses. On the drive up to Tripoli I was absolutely stunned at the convoys of cars heading in the opposite direction.

Almost every single car had men and women hanging out the windows, waving the national flag or the blue flag of Hariri's party, or with photos of Hariri himself plastered all over them. 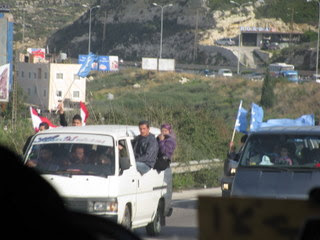 And by hanging out the windows, I mean sitting on the windows, or the roof of the car (on the highway going at least 80km/hr!) 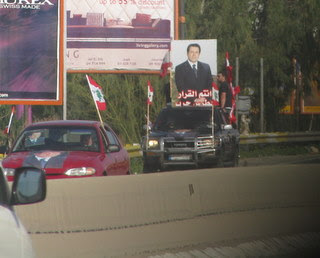 What better occassion to have your young children standing up with their heads out the sunroof? 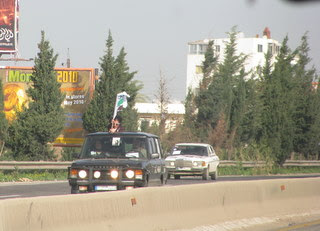 I find it hard to believe that a politician can be so loved, even after death. I struggle to imagine K-Rudd causing such a celebration.
Posted by Carly at 6:44 PM