The thunderstorm rolled in early this morning, and the view out of my bedroom window was a miserable sight. The rain was lashing down and it was the perfect Sunday morning to stay in bed reading a book. Alas, we'd already committed to a hike with some friends in the Qadisha Valley. We were all geared up, or so we thought, and ready and raring to go.

The view from the top of the valley was spectacular. 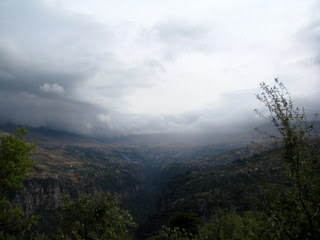 Chadi, one of my colleagues had brought extra gear for all, so we were well kitted out. 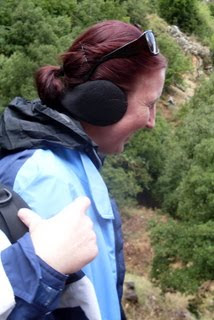 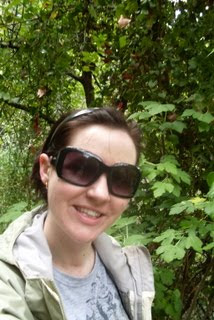 Chadi was involved in a project which aims to mark walking trails all the way down Lebanon to encourage eco-tourism, so he really knows his stuff. So off we went. Thankfully the rain hadn't made it to the valley yet, and it was a pretty rough downhill trek 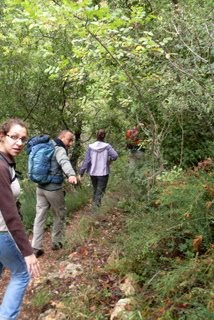 We had a couple of stops along the way to pick fruit off various trees. We tried something called "kahka" which no-one knew the translation for, and it was weird. It looked somewhat like an orange from the outside, but the skin was soft and peeled away, leaving a very messy and gooey fruity centre. We also found pomegranates (my favourite) which made concentrating on navigating the slippery path a bit more difficult. 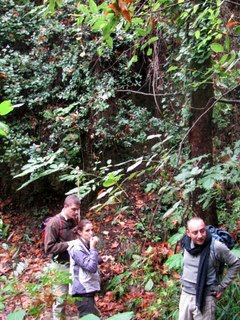 It was pretty tough going, the vast majority of it down hill. We stopped after about 2 hours for some bread and wine, and Julie and I knew that there was no way we were going to be able to make it back up the valley. Obviously I haven't been jazzercising as much as I should be!!

We were given instructions to follow a road for about an hour and a half to a restaurant, where the others would pick us up when they got back to the car. As we started walking the rain started, but it was a relatively flat road so we were happy. A couple of cars passed us and a while later they came back and offered us a lift. As both cars were driven by women we jumped in, and were so glad we did. The walk would've taken a hell of a lot longer than 1.5 hours, and they took us all the way up to the main road, and pointed out a bus that would take us home. Figuring the others would be a few more hours, we jumped on and headed for home. It was a smart move, as apparently it took them a lot longer than 2 hours to walk back up the valley. 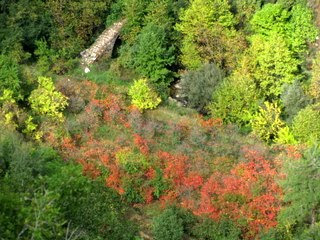 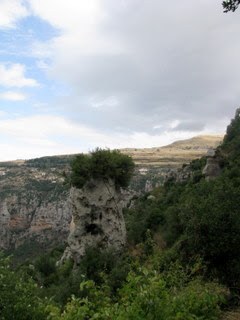 and the man made structures as well. There are quite a few monasteries built into the mountains, previously only accessible by foot (it looks like there are some roads there now) 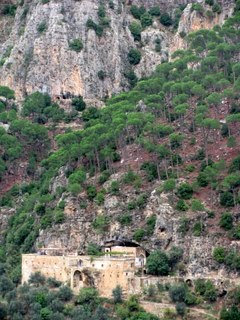 And I've still got another two days off work!!
Posted by Carly at 5:16 AM