I had to go down to head office on Friday for a meeting, and had thought I'd spend the rest of the day doing some work and then attend a beginner's Arabic lesson in the afternoon. At about 1pm one of my colleagues told me that I had to go with them to a local school because no-one else from the North was going. I didn't need any further convincing to get out of the office!

I found out along the way, that a group of British actors, led by David Morrissey had been running a drama workshop all week for kids from the refugee camps around Lebanon, and this was their big performance day. There were quite a few parents there, as well as the British Ambassador. It was a wonderful, wonderful afternoon. 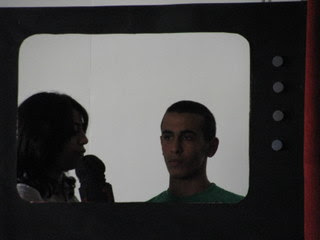 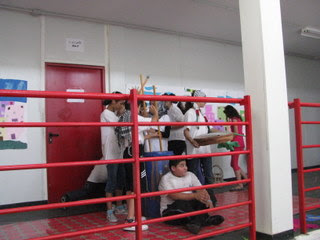 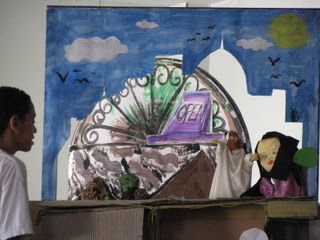 with many of the presentations focusing on the importance of friendship. There was also some dancing:

and some singing. This kid was from Nahr el-Bared and he was a wonderful singer. Unfortunately I didn't record more of his lovely voice...

These two were also pretty good

The culmination of all the performances was this:

Apparently on day one, the kids were all very quiet and the drama teachers were a bit worried that this would be the mood of the whole week. As you can see, they really came out of their shells. After the performance was over, and the kids were waiting for the busses to come, they were still singing and dancing, and hamming it up for the cameras. And then when the busses pulled up, there were tears, and hugs between the new friends. For them to have a week where they could just be kids is something I'm sure they'll remember in years to come.
Posted by Carly at 12:55 AM