Last night's movie night was hugely successful, with not only the screening of an amazing Indian film, but also the cooking of a great curry by our Indian friend.

The movie, Rang De Basanti, was brilliant. It's the story of a British filmmaker, who comes across the diary of her grandfather, who'd served as a jailer in the British Army during the Indian independence movement. Through the dairy, she learns the story of five freedom fighters. She decides to make a film about the revolutionaries, and casts a group of university students. While initially unable to relate to the material, the idealism of revolution becomes more relevant to them, and they gradually realise their own lives are similar to the characters they play, and that the state of affairs that once plagued the revolutionaries continues to torment their generation. (Source: wiki) 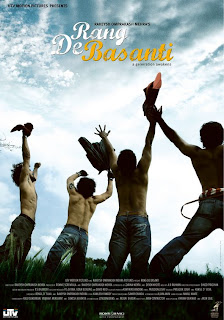 It was a very moving and tragic film, and also extremely long (the cover said "over 162 minutes). But if you can track down a copy, I highly recommend it.
Posted by Carly at 3:59 PM