It ain't over till the fat lady sings

Deep Purple at the Temple of Bacchus in Baalbeck was pretty cool, but last night, the entertainment was more fitting to the setting; a performance of La Traviata. Visually, it was beautiful, the costumes were gorgeous, as were the chandeliers hanging between pillars. The performance started off with a nice touch, that almost could have been scripted.... 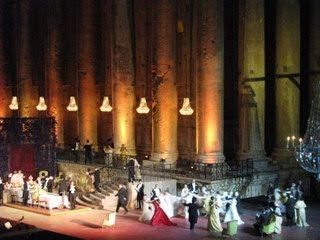 as the cast made their entrances, a little black and white cat stole out from behind one of the columns, trotted down the stairs, had a look around and then dashed off the stage. I'd been wondering if there'd be any stage crashes like there'd been at Deep Purple, and I'm happy to report that the little cat was the only one. (Unfortunately I didn't get a snap of it.) 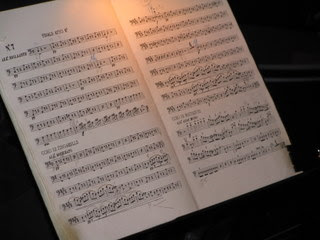 The acoustics were ok, but if the performer turned away from us, then we could barely hear what was going on (not that I could understand it anyway, I think I got about three words: Alfredo, doctore, amore!)

During the performances there were a number of distractions that can only come with having an outdoor venue; a local mosque blasting out something, fireworks going off, pop music coming from a nearby restaurant. So on occasions, the moment was kind of lost because we couldn't hear the singers and had other music playing over the top. 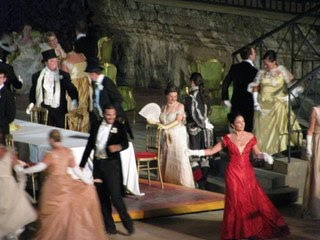 The singers were fantastic, and you can check out a picture of the leading man - we saw him after the show looking very dapper in a white suit (but we were too shy to ask for a photo). Apparently he was the founding member of Il Divo... 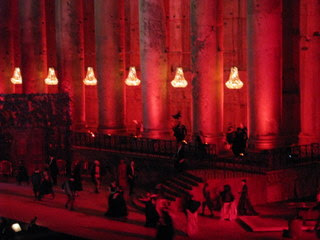 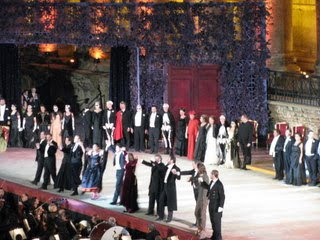 I can't remember what time the show finished, but we headed off at about 1am. Apparently the other car got back to Tripoli at 2:30am...we got a little bit lost and ended up getting home at 4am...but it was worth it!!
Posted by Carly at 5:16 PM