I didn't know there was a sea cow slaughter...

...but as you know, I'm a big fan of dugongs and so I was a bit distressed to read about a thriving black market for dugong meat in North Queensland. Hopefully the practice can be reined in by licensing, of course, I (and the dugongs I'm sure) would prefer that they weren't hunted at all. 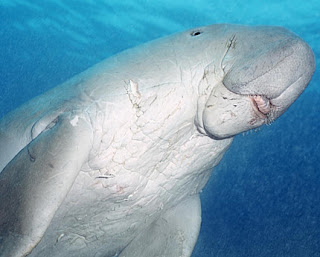 A LEADING Aboriginal figure has called for traditional owners to ban the controversial practice of dugong hunting.

North Queensland Land Council chairman Terry O'Shane has urged traditional owners to impose a total ban on hunting the endangered species, which are also referred to as sea cows, and place restrictions on turtle hunting.

His comments come after reports members of the Yarrabah community, south of Cairns, had been selling dugong and turtle meat on the black market for up to $50 a kilogram.

Mr O'Shane said although traditional owners had the right to hunt both species, they had a responsibility to protect the environment.

"What I'm talking to the mobs about is developing a responsible response to those rights," he said."We need to protect the eco-system.Dugong is an endangered species and we have to recognise that too."

He said he would meet with clan groups across North Queensland in the next few weeks to encourage them to impose management plans for traditional hunting.

"If they say no they're not happy about that, that's okay, but I need to put that on the table. It needs to be part of the discussion."

Mr O'Shane said his tribal group, the Yalanji clan, had banned dugong hunting in its traditional area north of Cairns and had imposed tough restrictions on turtle hunting.

Traditional owners in the area were issued with traditional hunting licenses and those who defied the ban were punished, he said.

"We have people that go out and do the wrong thing and it's up to us to pull them into line, and we do."

Mr O'Shane will meet with community leaders at Yarrabah, south of Cairns, to discuss allegations of profiteering from the traditional hunting rights.

"If it is happening, it's not for people to come along and start to profiteer from people's native title rights," he said.

And if you want to read more about Dugongs, there's a very short piece in the SMH with comparisons to Japanese whaling.
Posted by Carly at 4:34 PM