Elsa and I were very excited on Friday evening as we drove down to Beirut to meet up with Charlie to go and watch a 3D movie. Unfortunately the movie was no longer playing, but a new 3D film had taken its place. It was called "G-Force" and it was about a special crack unit of FBI guinea pigs...yup. It was actually quite funny, and the whole 3D element was super cool. There should definitely be more films made in 3D! Update: The BBC website has an interesting article on 3D films here.

On Saturday afternoon we made out way down to the old port where we were meeting the others to continue Oli and Sara's wedding celebrations. There must have been at least 20 people in the group and we chugged out to sea for about 40 minutes, through some decent waves and lots of jellyfish, until we reached Rabbit Island. (Unlike the Rabbit Island I went to in Cambodia which is apparently shaped like a rabbit, this Rabbit Island actually has rabbits on it).

It was a very warm day, and I was a bit of an anti-sun nazi - thankfully there were thatched umbrellas scattered up the beach. (That's Tripoli in the distance.) 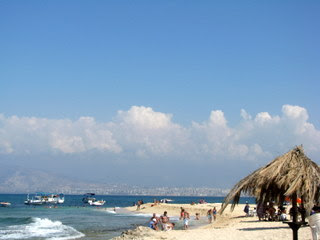 It was a lovely afternoon, the water temperature was perfect; the problem was getting into the water over slimy rocks and through the masses of seaweed that kept close to the shore. There was much eating and drinking and lazing around enjoying the view, with the only disruptions being the occasional squeal when someone walked up the beach pasts tufts of grass which would disturb the thousands of grasshoppers lying within. 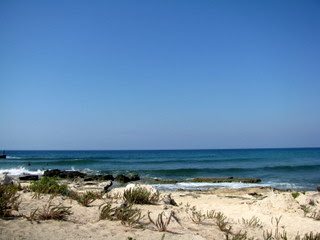 Unfortunately all good things must come to an end, and at about 7pm the boat came back for us. The ride back didn't feel as long, and I spent part of the time taking photos of the most adorable kid. His Dad had been on the boat with us on the way over and had let him hold the wheel occasionally. 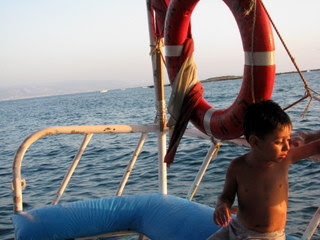 The poor little tacker had a big day at the beach and not long after I snapped this he was fast asleep on Dad's lap. 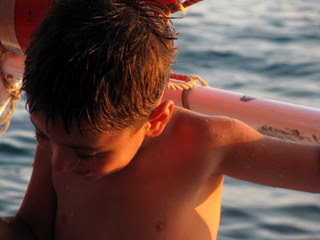 The sunset was beautiful - the sight of the sun setting over water is still a novelty for me, having grown up on the east coast of Australia, and this one was no exception. 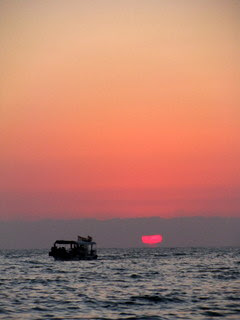 We all met up later for a delicious seafood meal, and a lot of very tired people headed home (relatively) early.
Posted by Carly at 3:56 PM