I arrived at Tracey's place after hanging out with a colleague, to find the process of catsitting in its earliest stages. Slyvestor (who's a girl cat) was being dropped off for a week. She's a beautiful cat, and I couldn't put my finger on why she looked kind of weird - I put it down to her wide eyes that always looked extremely surprised (and she could never sit still for a photo). 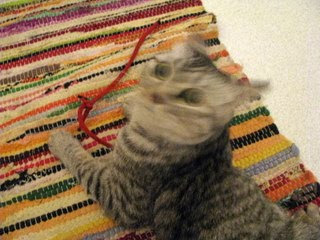 We headed down Germaizy Street to get some dinner, and ended up in a little restaurant called Bread. I ordered the Black Pasta, because it sounded interesting - I wasn't expecting it to actually be black, but they use squid ink to dye it. Of course I was wearing a white shirt which now has a lovely stain on it. (I take after my Dad in that respect!!) Tracey and I shared that and another pasta, and had a lovely evening chatting away. As we walked home I started feeling a bit funny, but didn't think much of it. Turns out, gut rot struck us both, but Tracey was much worse and spent most of the night vomiting black. Poor thing.

She soldiered on the next morning, and watched me eat a delicious croissant at Paul's - a lovely cafe/restaurant right at the end of Germaizy Street, with a view to Hariri's mosque. From there, we fambled around, and Tracey directed my attention to a little alleyway. I spotted a cat. 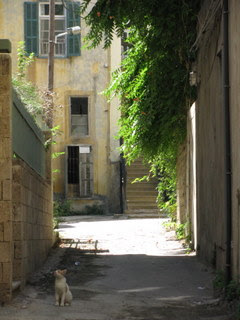 She led me down further, and suddenly there were cats everywhere. There's an old woman who lives in the room you can see in the photo above, who feeds the neighbourhood cats. Tracey had met her before and she came out to talk to us (I really need to learn some French...and some Arabic!) and then she called the cats... 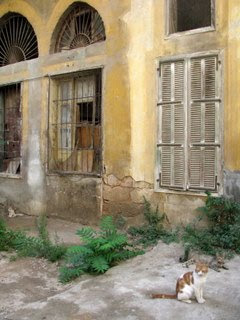 I swear about 20 cats came out of various hiding places...a real life, crazy old cat lady!! And check this out, Mangy has a doppleganger! 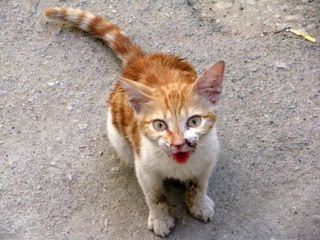 We kept wandering, and I was stunned at the beauty of so many old and decrepit houses...there's so much history in Beirut, so many competing histories, but it all comes together to form an amazing city. 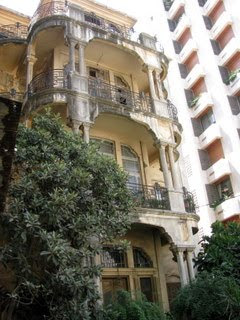 It was about time for another rest stop, though Tracey was holding up remarkably well. We went up to the terrace of the Albergo hotel - a very posh old hotel that is beautifully furnished. The little cafe on the terrace was a slice of paradise, and I thorougly enjoyed my rose water lemonade in its surrounds. 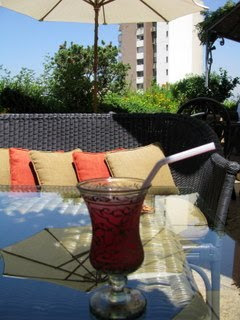 A stop at Antoine's resulted in some much needed literature - I now have six great books to keep me occupied over coming weeks. On the way back to Tracey's some more cats caught our eye...new little kittens, five in all, who were just so cute! 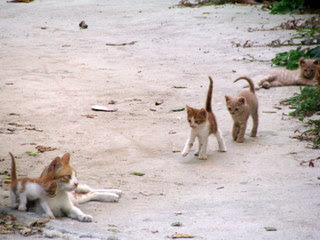 After taking some rest, we headed out again, to a cinema near Tracey's house. The Lebanese Film Festival was a very interesting way to spend Saturday night. For the tiny sum of 5000 Lebanese Pounds (A$4), we got a ticket to the entire festival (4 nights). In Cinema 1, we got to see a range of films over a few hours, which was a very interesting evening. I've adapted the summaries from the program... 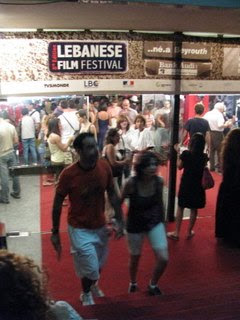 "Not Like My Sister" by Leyla Assaf-Tengroth
Rim was married off at the age of 13. Her little sister Dalida decides that the same thing wouldn't happen to her, but it's a risky decision. By the age of 16, she had survived three attempts on her life by her father and his brothers, and a suicide attempt. Despite this, her protest grows even stronger, and she finally triumps by marrying the man she loves, even though he is a Christian.

"Generation Rewind" by Chadi Younes
Shot on March 14 2005, when one million Lebanese people gathered in downtown Beirut to protest. Put together, the footage turned out to be a portrait of a young generation that inherits the past and, inevitably, keeps repeating it.

"Gunz" by Amandine Brenas
An animated short, Gun depicts somewhere in Beirut in the mid 80s, where a young girl decides to change the world through pixels.

"Darson fil Tarikh" by Hady Zaccak
In 1989 a group gathered and decided to consolidate books about history and civil education in Lebanon - a unified book has yet to come to fruition. Instead, there are several history books reflecting different versions of history. "A Lesson in History" follows history classes in five different schools in Beirut. Although the curriculum is standardised for all thrid year students according to a 1970 edict, contradictions emerge through interviews with the students themselves, who come from different backrounds and affiliations.

"Awalouha Najwa...wa Akhirouha!" by Lokman Slim and Monika Borgmann
"In Place: 4 Returnees From the Lebanese Civil Wars" joins together four interviews, each one a separate act in the drama the Lebanese Civil Waers. Former leaders continue to hold respectable postiions. Former grunts contine to hold marginalised positions. They give furtive interviews under the cover of anonymity (the transcript of the interviews are portrayed by actors).

The documentaries about Dalida, and the history books were really moving and interesting, but the rest were a bit weird - a lot of people walked out of the last film, it was difficult to watch, but I wonder how much of that was just the stark portrayals, or the content itself.

This morning, after another croissant at Paul's we continued walking around, and paid another visit to the litter of kitties, with a bit of food this time. Before I knew it, it was time to get going, and luckily enough, a bus had just pulled over at the stop when I walked down to it. And that my friends, is what I surmise a typical weekend in Beirut to be!!
Posted by Carly at 4:41 AM