Two days ago, I was walking home from the compound, alongside the big cement blocks (picture taken from the opposite side of the road this morning) that surround not only our compound, but a whole old fair ground. 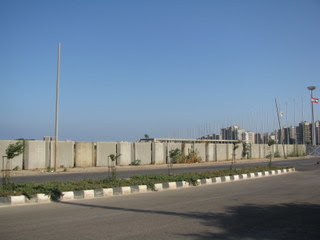 I'd discovered that if I stick to the footpath on the same side of the road as the compound there's more shade. As I walked along and a car sped by me (I'm was walking in the opposite direction to oncoming traffic) I realised how there was only a very small gutter and if a car were to spin out of control, a pedestrian could very easily get smashed up against a concrete wall. So I decided it was probably better to walk on the other side of the road where the gutter is much much higher.

As I walked out of the compound yesterday I'd forgotten my earlier decision and just kept walking around the corner. I noticed a couple of police cars and a few people standing around. Sure enough, someone had lost control of their (rather new) Mercedes and crashed into the concrete. 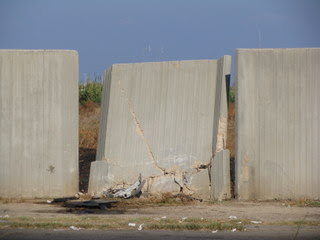 I won't forget today which side of the road to walk on...

And in case you were wondering, this is what the compound looks like - inside are long demountable containers, separated into smaller offices. 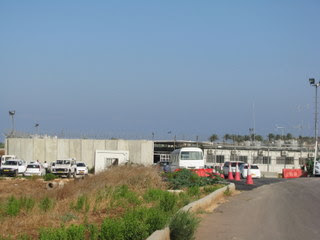