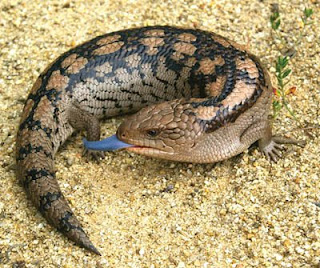 We don't get snakes where I live (except in the scrubby areas like Burleigh Headland, see exhibit A) but we do regularly have visits from blue tongues, who usually like to sun themselves somewhere completely inappropriate, like beside the pool (and then they fall in) or right in the spot where the front wheel of Dad's car ends up.

I remember one afternoon finding a bluey in this exact spot, and thinking how it needed to be moved before Dad got home. I tried stamping my feet nearby(ish) to try to scare it away, which didn't work. I'd seen Dad pick up blue tongues before, I just needed to get some garden gloves and do it. I took a few deep breaths and made my approach. Without looking around, it knew I was there and puffed its body up to at least twice the normal width. That's when I decided to just flag Dad down before he pulled into the driveway and get him to move the lizard. Yep, I'm a big chicken...but they can really bite!!

And while I'm on the subject of Australian animals, here's a Rainbow Lorikeet in the Bottlebrush tree next door that I snapped just before I left. 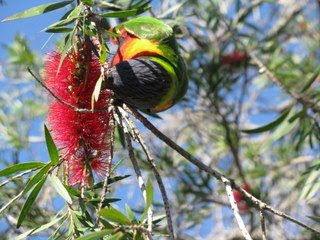 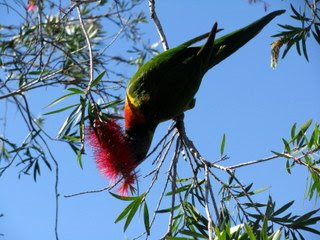