We headed back to the broken bridge in Midsayap, and on the way stopped at the Governor's sub-office to inform him about our Walk the World event. While we were waiting we were encouraged to try the produce from the Governor's side venture: fresh caribou milk. Pasteurised of course, I was handed a 500ml bottle of choco flavoured milk. It was creamy and delicious, but a little bit lumpy...not from any grossness, it had been in the freezer. Half a litre was a bit excessive, but I made my way through most of the bottle as a sign of good faith. 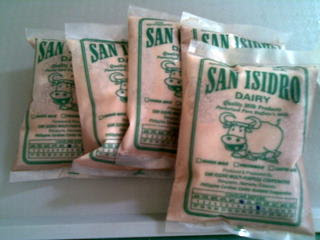 After waiting a good 45 minutes, we gave up on the Governor and headed for the bridge, and got into a very low-lying boat. Six of us jumped into 2 moto-trikes and turned off the road before Olandang (where I'd been last time). The street was lined with very new shelters - I could tell because many people were still stringing up fabric for walls, or weaving palm leaves for roofing.

These people had come from Datu Piang, just across the river, a week ago. While we were having lunch at the Barangay Captain's house, we could hear the mortars falling. At first I didn't hear them; every so often my colleague would turn to me and say, "did you hear that?" And I hadn't. But then, I heard the thunder. Only it wasn't thunder, it was the sound of shelling. And then I began to hear it very regularly after my ears recognised what the sound was. The shelling was probably happening only 10-15km away.

What struck me about this new evacuation centre was that everyone seemed pretty busy. People had already set up little shops, selling coffee mix and lollies, or rice pancakes. 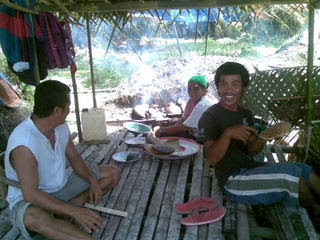 Secondly, was the realisation that many (if not most) of these people had been displaced before. I could tell this before anyone mentioned it as lots of shelters had old WFP rice bags sewn together for walls or ceilings.

From my time in Bangladesh, I'm used to causing crowds to gather around to get a look at the white girl. But most of the villages I went to there were quite small. I felt like KC Concepcion with the masses that were following me around; not just children, but adults as well. 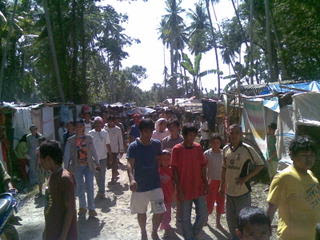 We walked through the camp, stopping to talk to different families along the way. This man waved me over, and I immediately noticed the small boy with a cleft palate. The poor kid was drooling a lot, but managed a few smiles at me. Saman was the grandfather of three boys, and was taking care of them while their father stayed at home...a dangerous prospect. 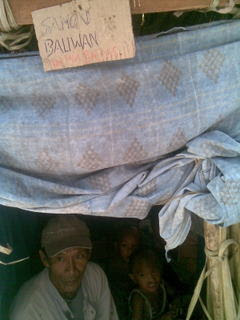 I was getting a bit frustrated by the crowd that had gathered around, so snuck away to a different hut. A woman greeted me in English, and we had a heartbreaking talk about her situation. She had two small children and not enough money to feed them. Her husband was still at home and she was extremely worried about him. She told me that she had worked in Bahrain as a domestic helper and said she wished she'd never left. This is the fourth time she's been displaced in her life. "There are too many difficulties here. I'm worried about my husband, and for my children having to live here where there's no clean water and no toilets. There's just too much danger," she told me with tears in her eyes. I couldn't promise her that the rice would arrive in a couple of days, I couldn't promise anything. All I could do was give her a hug and tell her how much I hoped I could visit again.

I'm not sure why this site affected me so much, I've seen camps that have worse conditions where the people have been there for nine months.

But once again, the resilience of people to not only survive but to try to continue their lives is what gives me the most encouragement.
Posted by Carly at 1:29 AM