Drink Act II, or, Chico what happened to you man?

Our first stop was a little European resto-bar where we met some more friends of Darcy's. The place was empty and the staff didn't mind letting us behind the bar to mix some drinks. So another couple of drinks were downed. 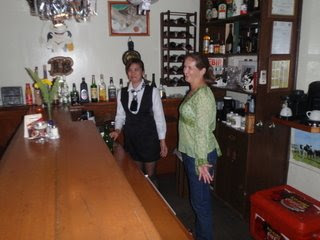 We moved onto Chico's bar, where there was a live band, complete with Pussycat Doll-esque singers gyrating in unison on the stage. We grabbed a jug full of margarita-ry goodness and watched the world go by, taking the time to complement some Filipinas on their stunning outfits. Nic hit the dance floor and after another jug magically disappeared I joined her. I don't know how it happened exactly, but somehow we ended up on stage singing "Proud Mary" with the band 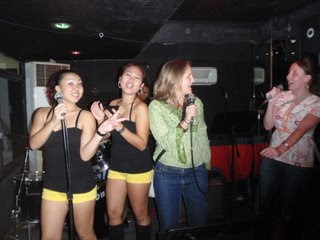 Pure gold! Darcy and his mate (who was of a similar age) left about this point, maybe earlier. His friend sent me a text telling us to call him when we were finished dancing as he'd come back and get us to make sure we got home safely. It was a very sweet offer that we took him up on. While we were waiting, we met the famous Chico, who we couldn't stop praising for owning such a fun bar. But for whatever reason, Chico had actually sold Chico's, but the new owners had retained the name. We didn't think Chico was as cool after that...selling out to the man, pfffft!!

Anyway, due to the kindness of Aussie expats to a couple of drunken idiots, we got home safe and sound, prepared for sizeable hangovers in the morning.