I wish I'd taken some 'before' photos for you. Yesterday's distribution was absolute madness. I suppose my taking the simple task of queueing for granted stems from my colonial (or convict?) ancestry. I would think that if you sat three people in front of three windows, that other people waiting for their services would simply fall in line in front of the three windows. WRONG! Sure, it begins with some resemblance to a line or five, but it quickly gets totally out of control!

The day before yesterday, we were issuing coupons before the food distribution, and things were getting a bit chaotic. We had to call the cavalry (and by cavalry I mean infantry). I was quite concerned about the crowd and the pushing that was going on, so I was (relatively) happy when a few army dudes showed up. Things settled down very quickly after that!

Yesterday, the three windows thing we thought would work just failed from about the third minute. It was a very hot day, and fair enough, people weren't that keen on standing in long lines in the sun. So they'd just crowd around the front, waving their coupons in our faces, hoping we'd take theirs and they could get on with the day. It got a bit ridiculous. Luckily, we'd learnt our lesson from the day before and brought a megaphone with us. We moved everyone away and got them to organise themselves into groups of about 10. Then one representative could approach us to line up to get 10 food coupons. We decided on 2 lines for the men, and 1 for the women. I thought some stick figures signs indicating which line was which would do the trick. 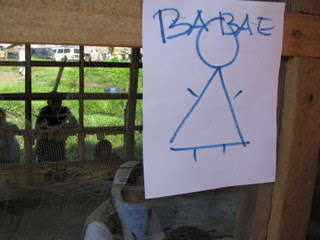 I didn't see any women trying to join the male lines, but the number of men trying to queue up with the women was ridiculous!! And the guys still couldn't figure out how to make 2 lines... 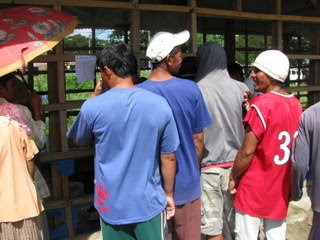 Everyone probably thought I was a cold hearted witch for telling people loitering in front who didn't have coupons to go away, over and over again. But the safety of my colleague and myself, and of the IDPs is more important to me than allowing a free-for-all hang around and check out what's going on, even though I've got absolutely nothing to do with what's going on here today situation. If only I knew how to say "move along, nothing to see here"...
Posted by Carly at 11:46 AM