This week we've had some visitors from two of our biggest corporate sponsors, and as such, a program was organised to show them some of the places we're operating.

Hailee, Hasna and I were the "advance team" yesterday, which meant we showed up at the site about3 hours before everyone else...not there was much to do, the a tarpaulin had already been set up so there wasn't anything to even supervise!

We decided to fill some time by interviewing a very interesting old woman for a potential case study. She couldn't remember how old she was, but had had 13 children, and 30 grandchildren. She's also made the pilgrimage to Mecca years ago...the first female Hajji (I think women are called Hajjas) I'd ever met. 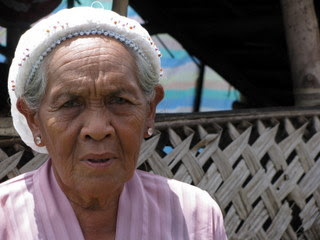 Eventually, the Governor rocked up as well as our corporate sponsors, and we had a very interesting meeting, where the IDPs were able to voice their concerns and appreciation. 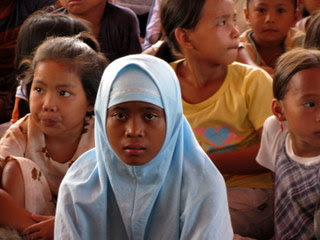 Not even a torrential downpour could put a dampener (ha di har) on things...thank goodness for the tarpaulin!
Posted by Carly at 8:00 PM