Keep your hands upon the wheel

Wow. Yesterday was an absolutely massive day. I went to a municipality called Senator Ninoy Aquino, which was a four hour drive from Cotabato City. Each way. And over two hours of the drive was on pretty bad dirt roads. Each way. The view from the top of the mountain we seemed to climb was wonderful - this isn't the best of photos, but I like the mist creeping in. 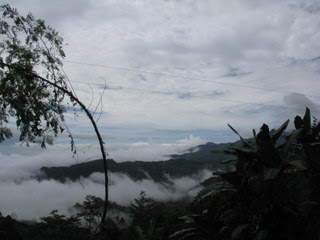 Anyway, we rolled into S.N.A and had a quick meeting with the Mayor, who decided to accompany us to the distribution. This was a distribution for former IDPs who have since returned home. We were giving them a 2 month supply of rice (50kgs). 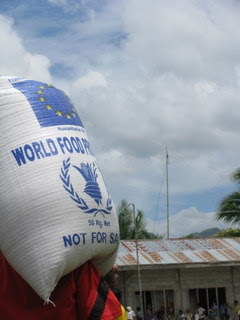 Part of any distribution is the exit monitoring we do, so I took it upon myself to start doing that. I grabbed myself an interpreter and started doing the rounds. Then there was a total West Wing moment...

Of course, my interviewee didn't break into English as he was from an indigenous tribe that lived further up in the hills than we already were. One of the questions we ask is "how much will you have to pay to transport the food home?" (Usually, this is a fare for a motorbike to deliver the sacks, no more than 50 pesos.) So after my translator translated that to another translator who translated it to the man, there was quite a bit of discussion, and it finally came back to me that they would have to use a horse to get the rice home. My (first) translator had obviously gotten everyone a bit confused and perhaps led them astray by mentioning a motorbike, which they of course, wouldn't be using. Anyway, it went back and forth down the translation chain until I had a straight answer about the cost of hiring a horse. It was 40 pesos. 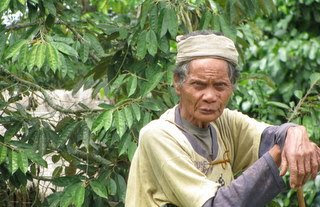 I busied myself with a different monitoring form for a while, then took myself around to check the distribution point when I came across a pig. I don't think he's got anything to worry about with this swine flu business...this would have to be one of the most isolated places I've ever been. He was a happy enough pig until this dog came along and started eating out of a nearby bucket (which was just out of range for Mr. Pig). 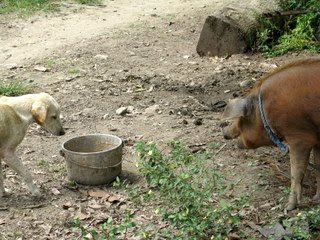 The 4 hour journey home was just as tough as the drive up, and I have the bruise on my collarbone - from being yanked against the seatbelt too many time to count - to prove it. I couldn't believe when we finally got back to the office and I stepped out of the car how sore my whole body was. My knees were aching, my neck was aching and I was completely exhausted. But it was worth the adventure to see such different scenery to what I've seen so far.
Posted by Carly at 10:59 AM