A big day in the field

Yesterday was a bit of an exciting. Well exciting after the technical working group meeting and we convoyed back to town (5 cars was a bit excessive but geez it looks cool!).

It was a big day as not only was the Country Director coming down from Manila, but he was bringing a reporter and a cameraman from the ABC with him. We headed out to the airport to meet them, and then straight out to Data Odin Sinsuat to show them a couple of different IDP camps.

For whatever reason, we had the army escorting us around the camp, which got a bit frustrating. The dude that attached himself to me spoke some English and as I was interviewing people for our exit monitoring process, he'd butt in with the answers. I had to keep telling him to (a) shut up and (b) not to walk into people's "houses" with his gigantic gun. That's just not kosher in my book. 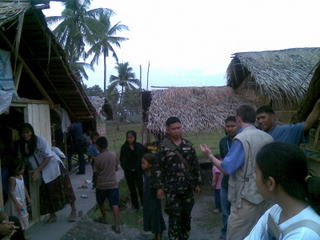 The journo, Kesha West, was lovely and had expressed an interest in interviewing one of us. Well, I was quick to pipe up that I'd only been in the country for 3 weeks and it was really more appropriate for her to speak with Nicole. It's not (just) because I'm chicken, I honestly didn't think I had enough knowledge about the situation to come across as having enough knowledge. But Nicole does and she did a fantastic job. 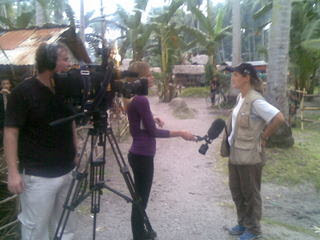 The story will air on the Australia channel (which we have but there's no sound really, and the picture's kind of fuzzy) but it was also probably be put up on the internet in its entirety. So I'll post the link once we find out.

It was a long afternoon and we were all in the mood for a beer. Mac Mac and Daren came straight over to our house, and we were joined later by Peter, who brought Steve and Pia along too. They were all excited to see the house and it was lovely having people around and entertaining. We've got to start planning our big housewarming bash...
Posted by Carly at 11:43 AM