Ok, first up, the following photos were taken on my phone and at relatively high speed from the car, so they're not fantastic. But the views on the drive back to Cotabato from Iligan were certainly spectacular at times. 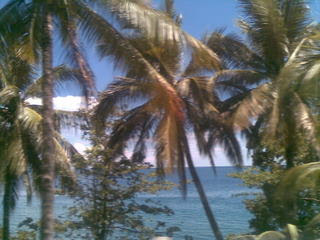 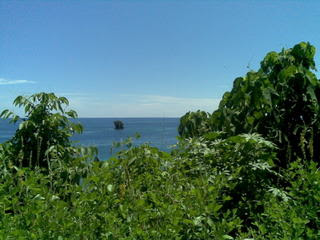 That blob in the middle of the ocean is actually a lovely looking island...the zoomed pic was terrible. Anyway, it was very pleasant enjoying these sights while often grabbing onto the 'Jesus bar' as our driver Jaidan tended to forget that he wasn't a rally driver.

Not to worry, we made it home safe and sound, stopping off at the mall. Due to me posting that Robyn Sparkles video, neither Nicole or myself can stop ourselves from singing "let's go to the mall...today" every time the mall is mentioned.

We passed a music store and I spotted the following:

Anyway, we needed to pick up some very important supplies (read: the gourmet ice-cream that we keep seeing advertised on tv) to get us through the evening, as well as preparations for tonight, which included 5 metres of white fabric and a roll of thick clear tape. Why? A special ANZAC day movie night. We don't actually know if anyone else we've invited is going to show up, but we've got enough beer, microwave popcorn and corn chips to feed a small army. Fitting really.