A night on the town in El Paso

After hiding behind a small partition in the hotel room, waiting for Vardy and SLB to arrive (having been tipped off by my main man Sam at reception) I jumped out and she was happily surprised to see me. After farting around for a little while, we went for a cruise through down town, which looked much seedier in the evening with all the shops closed up.

On the way into town, we'd spotted the Texas Roadhouse and decided that it was the perfect place for us to eat. 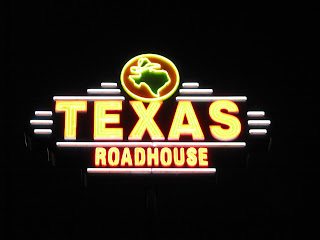 We entered to find peanut shells on the floor - my kind of place obviously!! After perusing the menu, we decided on a plate of appetizers to sample a few different things - including deep friend jalepenos...I gave them a miss. I thought I'd ordered ribs for the main, but turns out, it was one giant juicy steak.
I also decided that I wanted a beer - again, I thought I was just going to end up with a bottle of Bud, but instead.... 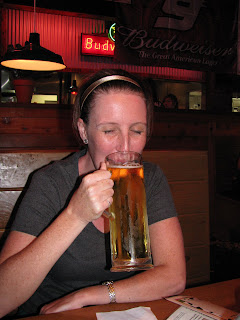 When the waitress, Marian (a lovely girl who was a big fan of the Hillsong Church) took SLB's order, and he chose a side of sweet potato, she asked if he'd like it "loaded"? We were all a bit confused by this, but it turns out that you could "load" your sweet potato with caramel and marshmallows!! SERIOUSLY!!! Well, it had to be tried, and it was actually pretty delicious - like a desert pie or something. That's it at the top of the photo below... 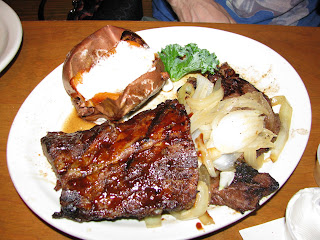 We ate as much as we could (and I did make sure to drink all the beer), but it was just an absolutely insane meal. We managed to share a massive piece of apple pie for dessert between the three of us! 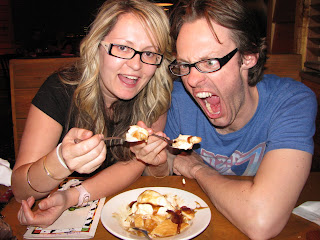 I think I got enough iron from that one steak than I did in an entire year in Bangladesh!
Posted by Carly at 3:51 AM